Russia and the GERD: An uneasy balancing act 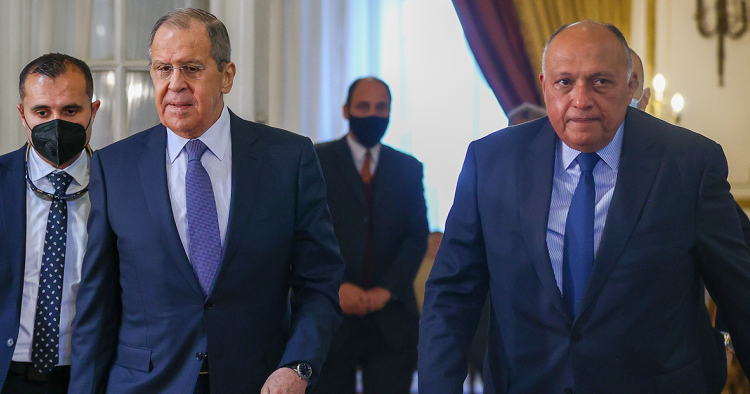 While Russia has offered technical assistance to the GERD’s conflicting parties, it has refrained from inserting itself into the Nile dam dispute as a mediator and instead balanced the views of Egypt, Sudan, and Ethiopia in multilateral fora. This position mirrors China’s approach to the GERD issue, and partially converges with the U.S.’s support for an AU resolution of the dispute. Russia’s balancing strategy has been positively received in Sudan and Ethiopia but has created latent frictions with Egypt. Russia has persisted with this non-interference policy, as it has largely prevented a spillover of tensions over the GERD to other areas of cooperation with Egypt and believes that its position will help consolidate its partnership with Ethiopia.

During the early years of the GERD dispute, which was triggered by Ethiopia’s inauguration of the dam in April 2011, Russia did not clearly articulate its position. A 2017 Russian International Affairs Council report accused Ethiopia of capitalizing on Egypt’s post-Arab Spring instability and the impending secession of South Sudan by unveiling the GERD in 2011. However, these criticisms did not enter Russian official discourse. This detached attitude toward the GERD ended in October 2019, when Russian Deputy Foreign Minister Mikhail Bogdanov stated that Russia was “ready to mediate” between Egypt and Ethiopia, as it possessed “excellent relations” with both countries. Egyptian President Abdel-Fattah el-Sisi met with Ethiopian Prime Minister Abiy Ahmed on the sidelines of the Russia-Africa Summit in Sochi, and Vladimir Putin discussed the GERD in meetings with both leaders.

Despite Bogdanov’s comments and Moscow’s growing arbitration role in regional conflicts like Libya and the Central African Republic, Russia did not become a mediator in the GERD dispute. This restraint is possibly explained by Russia’s ideational alignment with Ethiopia’s calls for non-interference and the diplomatic travails of other regional powers, such as the United States, the United Arab Emirates, and Turkey. Ahead of Lavrov’s April 12 visit to Cairo, Egyptian Foreign Minister Sameh Shoukry urged Russia to leverage its close relations with Ethiopia to ameliorate the GERD dispute and counter Ethiopia’s destabilizing conduct in the Horn of Africa. Shoukry also implored Russia to coordinate with other U.N. Security Council members on addressing Ethiopia’s threat to regional security. Lavrov did not respond to Shoukry’s comments but instead reiterated Russia’s support for AU-brokered tripartite negotiations.

Russia’s restrained approach to the GERD issue was also revealed in recent U.N. Security Council meetings. On July 8, Russia’s Permanent U.N. Representative Vasily Nebenzia acknowledged the GERD’s value in mitigating Ethiopia’s electricity shortages, while also noting Egypt and Sudan’s “legitimate concerns” that the GERD could exacerbate droughts. To prevent the dispute from becoming a regional security crisis, Nebenzia supported the incremental filling of the GERD and engagement between all Nile basin countries on water supply management. These comments subtly criticized Ethiopia’s unilateral second filling of the GERD, but also moderated Sisi’s bellicose claims that “all options were open” after the GERD talks failed in April.

Russia between Egypt and Ethiopia

As Russia believes that a geopolitical foothold in eastern Africa will bolster its influence in the Mediterranean Sea, Red Sea, and Indian Ocean, it has maintained favorable relations with Egypt, Sudan, and Ethiopia. Beyond its growing economic ties, Russia regularly engages with Egypt on the conflict in Libya and has attempted to secure long-term access to Egypt’s Mediterranean naval facilities since 2017. Russia is in the process of finalizing a naval base agreement in Port Sudan, which would provide it with a foothold on the Red Sea and bolster its ability to conduct anti-piracy missions in the Indian Ocean. Russia is also taking note of Ethiopia’s ambitions to become a Red Sea power, and is upgrading its security cooperation with Addis Ababa. Although Sudan has endorsed Moscow’s GERD position, Egypt’s disquiet with Russia’s handling of the dispute has undermined this balancing act.

In a July 10 Al-Shorouk article, Egyptian MP Emad Edin Hussein called Russia’s position “very negative,” and claimed that Putin was “trying to satisfy Ethiopia on the issue of the dam.” Egyptian analyst Mamdouh Munir argued that Russia’s GERD position underscored its prioritization of relations with Ethiopia over Egypt. These negative sentiments have potential policy implications. Although Russian technicians visited the El Dabaa nuclear reactor site on July 15, Egypt reportedly paused meetings with Russian nuclear energy giant Rosatom over their disagreements on the GERD. The expansion of Egypt’s security cooperation with Europe also reflects Cairo’s doubts about Russia’s standing as a crisis-proof partner.

To mitigate tensions over the GERD, Russia has strengthened its cooperation with Egypt in other spheres. On July 8, Russia overturned its ban on flights to Egyptian resorts, which was imposed after the downing of a passenger plane over the Sinai Peninsula in 2015. Egypt has proceeded to purchase Russian Su-35 jets, but it has not officially confirmed their arrival in Cairo. Egypt has also agreed to expand Russia’s industrial zone in the Suez Canal. This followed statements from Russian officials about developing the North-South Corridor as an alternative to the Suez Canal, which were widely criticized in Egypt. Russia has also paired dialogue with Egyptian officials on the GERD dispute with conflict resolution talks on Libya and Syria, which are vital areas of Moscow-Cairo cooperation. These symbolic and substantive policies underscore Russia and Egypt’s compartmentalization of their disagreements on the GERD.

Russia has also leveraged its synergistic position with Ethiopia on the GERD to strengthen its partnership with Addis Ababa. On July 12, Russia and Ethiopia signed a military cooperation agreement, which allowed Moscow to provide technological know-how to the Ethiopian army. The Russian Foreign Ministry insists that this agreement is unrelated to the GERD issue and mirrors its cooperation with Egypt and Sudan. However, it follows a trend of expanded Russia-Ethiopia cooperation. This trend was set into motion by inconsistencies in the U.S.-Ethiopia relationship and Prime Minister Ahmed’s enthusiastic embrace of a multipolar world order. Russia also views Ethiopia as a valuable arms client, as it has regularly purchased Russian weapons since the 1998-2000 Badme War with Eritrea, and favorably regards Ahmed’s domestic reforms.

In April 2018, Russia signed a security agreement with Ethiopia, which addressed counterterrorism, anti-piracy, and peacekeeping. In December 2019, 1,000 Ethiopian army officers travelled to Russia for naval training. Russia has also coordinated with China on thwarting a U.N. Security Council resolution calling for the suspension of violence in Tigray. Russia’s support for non-interference in Tigray, which contrasted with the U.S.’s imposition of sanctions against Ethiopian officials and security personnel, has been widely praised by Ethiopian Prime Minister Ahmed’s most loyal supporters.

Although Russia has relinquished its mediation aspirations in the GERD dispute and avoided offending any conflicting party, Moscow’s stance has strengthened its relationship with Ethiopia and strained its partnership with Egypt. As Ethiopia prepares to host the 2022 Russia-Africa summit in October, Russia will continue supporting an AU-led resolution of the GERD crisis and seek to reduce tensions with Egypt by exploring new avenues for cooperation.