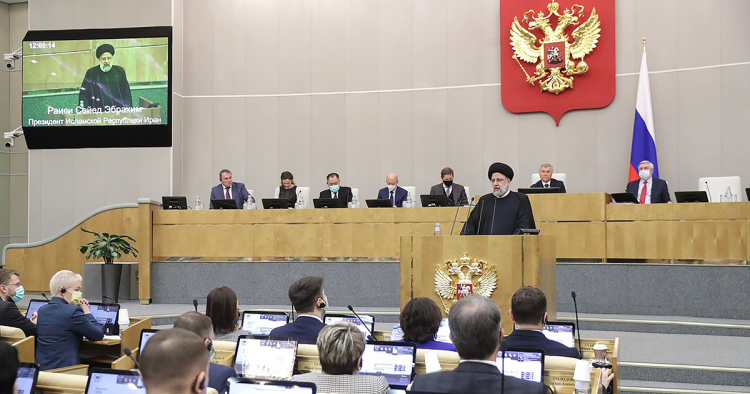 On Dec. 28, 2021, Israel carried out another air assault against Iranian assets in Latakia, Syria. While Iran can generally count on Moscow’s support in Syria, on this occasion Russian air defenses did not retaliate against Israel. Iranian observers argue that Russian inaction proves Moscow’s willingness to sacrifice Iranian interests when expedient. Some might even think that Russia is pivoting toward Israel in its Middle East policy. Nonetheless, the big picture of Russo-Iranian relations over the last decade reveals security cooperation between Tehran and Moscow that stands on a strong and reliable foundation, with both countries benefitting.

As entrenched despots fell during the Arab Spring uprisings of the early 2010s, Russia allied with Shi’a Iran against Bashar al-Assad’s Sunni opponents in the Syrian civil war. Despite controversies, the Shi’a Islamic Republic aligned Russia and its resources with Tehran's regional ideological agenda.

Thanks to Russian air support, Syria remained the keystone in Iran’s land bridge to the Mediterranean. Russia not only defined Syria as an area of thoroughgoing and continuous cooperation with Iran, but also recognized Iran's closest ally (and Israel’s nemesis) — Hezbollah — as a leading force in Syria. Hezbollah’s secretary-general, Hassan Nasrallah, frequently refers to Russia as an ally in his speeches. Moreover, Russia periodically hosts other influential, Iran-aligned militant groups operating in the Middle East.

Russo-Iranian collaboration in Syria stems from convergent strategic aims. Moscow and Tehran have been keen to preserve their long-time ally Assad in Damascus against rebels’ attempts to overthrow his regime. A pro-Western regime in Damascus would have threatened Iran’s and Russia’s military foothold, political influence, and economic interests in Syria. Russia and Iran built a partnership knowing that neither Russia’s airstrikes nor Iran-backed ground forces could fulfill military objectives by themselves. The same cooperative approach prevails in Syria’s post-war reconstruction, although the two countries compete over various sectors of the Syrian economy.

Iran's social, economic, and security influence across Syria has increased substantially from 2013 to 2020. Nevertheless, decision makers in Tehran have yet to fulfill many of their ambitions for the "Axis of Resistance." Relying on Iraq and Syria, Iran hopes to establish an economic land corridor from Tehran to Beirut, independent of intraregional religious differences, to spread its influence peacefully, in tandem with its more violent tactics. Iran also looks to finalize oil and gas pipelines to the Mediterranean. Control over the Bab el-Mandeb Strait in the Gulf of Aden by the Iran-backed Houthi movement in Yemen will give Tehran another strategic means for reaching the Mediterranean Sea.

Turning costly regional security and military influence into a vibrant "economic axis" for Iranian entrepreneurs is a shift in policy demanded by Iranian politicians and war veterans. This expanding regional economic and civil presence would sharply diminish Israel's ability to strike Iranian facilities with impunity, as Russia is less likely to countenance attacks on Iranian assets in Syria if they are civilian and non-lethal. Furthermore, Russia takes an increasingly critical approach to Israeli raids on Syrian soil, helping Syria to intercept Israeli missile strikes with greater frequency.

Moscow views Israel as America’s closest ally in the Middle East. From the Russian perspective, Israel exerts less power than Iran in the region and is obliged to protect and promote U.S. interests. While Russia and Iran have cultivated a framework for bilateral cooperation and identified common interests, Israel lacks such a platform. Iranian politicians have also built more personal relationships with President Vladimir Putin, something essential to strong Russia ties. Furthermore, top Israeli national security experts see Russia's overall role in the Middle East as a "strategic challenge and an urgent concern both to Israel and the United States." The commander of U.S. Central Command (CENTCOM), Gen. Kenneth McKenzie, recently sat for a recorded discussion with MEI’s senior vice president, Amb. Gerald Feierstein. In it, McKenzie did not identify Israel as a Russian ally; he named Iran and Syria as “Russia's only true friends in the region.”

To Russia, Iran is a populous country with rich natural resources, a capable labor force, stable political leadership, and a predictable foreign policy. At the regional level, Tehran commands a network of nearly 200,000 armed men operating under the cohesive field leadership of the Islamic Revolutionary Guard Corps (IRGC) – Quds Force, an arm capable of neutralizing threats (including the Israeli threat in Syria and Lebanon). Though Iran has tools to respond to Israeli attacks on its facilities and forces in Syria — and Russia knows that — the Islamic Republic refrains from retaliating because it sees the damage from Israeli strikes as a marginal threat to its influence there. More than anything, Tehran doesn't want to alienate Russia by engaging directly with Israel in Syria.

IRGC-affiliated scholars in Iran believe that Iran's "regional power projection and anti-Western policies" stoke Russia's desire to develop closer ties with Tehran. In other words, Russians prefer a "powerful and influential Iran in the region" that could serve as an ally. The two countries are already collaborating to circumvent U.S. sanctions by developing a mechanism for bilateral trade and transactions. With the recent invasion of Ukraine and additional Western sanctions, Moscow is expected to adopt Iran's sanction-evading tactics.

The Arab Spring and the 2014 Ukraine crisis increased Iran's importance for Russia. In recent years, Moscow and Tehran have cooperated in various spheres, albeit with occasional competition. Both sides gradually came to the understanding that disagreements must be managed and overlapping interests protected. By contrast, Russia and Israel have divergent strategic visions for the regional order in the Middle East. Israel hopes for more American backing against Iran, which could hurt Russia’s economic and security interests. Beyond the Middle East, Iran and Israel’s differing stances on Russia’s invasion of Ukraine are revealing. Israel generally opposes Russia’s assertiveness against the Western order, with Israeli Foreign Minister Yair Lapid condemning the recent invasion as a “violation of the world order.” Iran, meanwhile, took a relatively neutral stance and blamed NATO for “provocative actions.”

Fardin Eftekhari is a PhD candidate in the Department of Regional Studies at the University of Tehran. He also has an MA in International Relations from Shahid Beheshti University in Tehran. Fardin's work focuses on Iranian national security and foreign policymaking. You can follow him on Twitter @EftekhariFardin. The opinions expressed in this piece are his own.