Russia, Iran, and the competition to shape Syria’s future 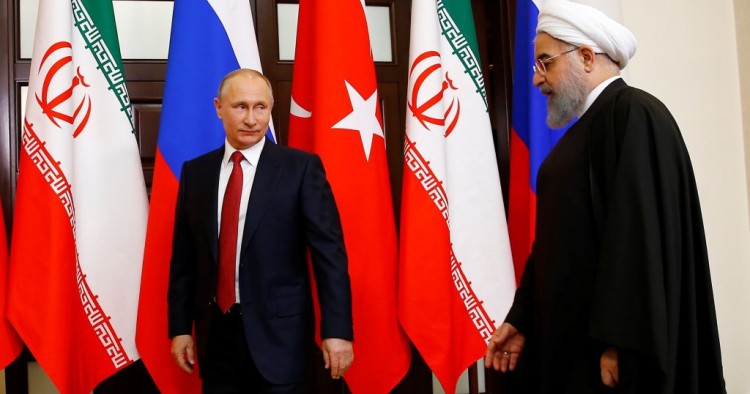 In recent months, many people have said that the war in Syria is coming to an end. On the contrary, these claims are premature and wildly underestimate the roots of existing and future violence. Nevertheless, the prevailing power dynamics in Syria are undoubtedly shifting. Whether one looks at the crisis in Idlib and the declining influence of Syria’s mainstream opposition; the shifting or ambiguous future status of America, Turkey, and the Syrian Democratic Forces; or the dramatic deterioration of security in southern Syria, the sands are shifting in important and consequential ways.

One similarly important dynamic that is not acknowledged enough is the intensifying competition between Russia and Iran to determine the future shape of Syria and their position in it. While the very real competitive dynamic between Moscow and Tehran will never transition to hostility, it is beginning to have a very real effect on the evolution of major aspects of the crisis — from active conflict theaters, to the structures of the state, control over resources, and the prospect of intra-state conflict on Syrian soil.

At its core, the competitive dynamic is driven by Russia and Iran’s divergent and rival mechanisms for exerting influence in Syria. While Russia seeks to rebuild the state and its core structures and to recentralize state authority over all arms of power, Iran seeks to infiltrate and embed itself within the state, while simultaneously building deep-rooted parallel arms of power under its direct control. These two disparate approaches existed in a relatively comfortable state of compatibility at the height of the armed conflict, but as fighting restricts and attention turns elsewhere, they no longer operate quite so agreeably.

The most recent example of this competition came with news that Syria’s most wealthy and powerful businessman, Rami Makhlouf, had been effectively defrocked by President Bashar al-Assad and his major financial holdings seized: SyriaTel and the al-Bustan Association. While the precise details lying behind this development remain shrouded in mystery, the role of Russia is hard to miss. Public reporting has claimed Russia had manipulated Assad into turning on Makhlouf by calling in its debts — some $3 billion — and making clear that if Damascus was not in a position to pay, its biggest business crony Makhlouf was.

More importantly, Makhlouf was known to be an invaluable asset of Iran, acting as its fixer and mediator for countless business deals in Syria, including Iran’s acquisition of a port in Latakia and several sizeable multi-province telecommunications contracts. That port deal has now been annulled, along with at least two more telecommunications deals that were close to signing. A broader network of at least 30 individuals linked to Makhlouf within the business community, in local and provincial politics, and in the military and intelligence apparatus have all since been sidelined — many placed under house arrest. All were, in one way or another, operating in Iran’s benefit.

Soon after the Makhlouf episode became public, so too did the wholesale rebranding of the Syrian regime’s most well-known loyalist fighting unit, the Tiger Forces, from being a semi-autonomous, disparate wing of Syria’s Air Force Intelligence Directorate to the 25th Counter-Terrorism Division, a newly centralized structure entirely under the control of the Russian-guided Ministry of Defense. As it happens, Makhlouf had been a notable financial backer of the Tiger Forces, but that investment relationship is also now dead. The integration of the Tiger Forces into the core state apparatus serves Russia’s interests, given Moscow’s public praise for its leader, Brigadier General Suhail al-Hassan, and the pre-existing efforts by Syria’s pro-Russian minister of defense, General Ali Ayoub, to “de-militiarize” Syria’s military and paramilitary landscape.

More broadly and in addition to Russia’s ongoing efforts to influence minister-level decision-making in Damascus, Russia was also instrumental in catalyzing a wholesale reshuffling of Syria’s security apparatus in July 2019, when the National Security Bureau and all four of Syria’s intelligence directorates were placed under new leaderships. Unsurprisingly, all five promoted individuals — Mohammed Deeb Zeitoun and Generals Ghasan Ismail, Hossam Louka, Nasser Deeb, and Nasser al-Ali — enjoy especially close relations with Russia’s military and none had a public affiliation with Iran or its interests.

Since the spring, Russia and Iran’s divergent security priorities have also become increasingly clear. While Russia has expended significant military and diplomatic energies over the fate of Idlib, Iran has almost entirely ignored the conflict there, offering no troops or logistical support. Iran, meanwhile, has doubled down on its investment in central and eastern Syria, regions where Russia has disinvested since the Idlib crisis erupted. While expending some effort to contain ISIS, Iran’s primary energies in central and eastern Syria are focused on building expansive military bases, constructing new border crossings with Iraq, embedding itself culturally within an otherwise conservative Sunni Arab heartland, and recruiting locals to join its array of militias.

On one level, it is of course natural that in a “post-conflict” phase, the unity that once defined Russian and Iranian shared interest in Syria has begun to erode, revealing more substantial strategic differences. And it is worth emphasizing again that intensifying competition does not in any way equal, or lead to, eventual hostilities. That is virtually impossible. However, the existence of significant Russian-Iranian contestation and Russia’s apparent upper hand when it comes to influencing the shape of the Syrian state and its resource allocation may have policy implications.

In the Middle East, the debate over whether or not to re-engage the Assad regime remains an open question. For those states tilting toward engagement — like the UAE, which sent a sizeable delegation to Damascus’s recent International Trade Fair — Russia’s competition with Iran might appear to justify their about-turn, because doing so might add to the pressure against Iran. Similarly, Russia’s actions may feasibly be intended in part to signal to Washington that an Assad “victory” in Syria need not represent an Iranian victory.

However, the reality is inescapable: Iran is operating on a different playing field and with a much longer time frame in mind. So long as Iran controls tens of thousands of militiamen, some within the Syrian state and others operating in parallel to it, there is no scenario where Tehran is double-crossed. Likewise, having successfully established a region-wide security apparatus spanning from Tehran through Baghdad, Damascus, and into Beirut and Palestine, Iran has already won an irreversible strategic victory. No matter what happens, Iran is never leaving Syria and no actor exists that is capable of destroying or outcompeting Iran’s asymmetric advantage. To re-engage Assad in this reality would not just represent an admission of Iran’s power, but it would also serve to solidify it.