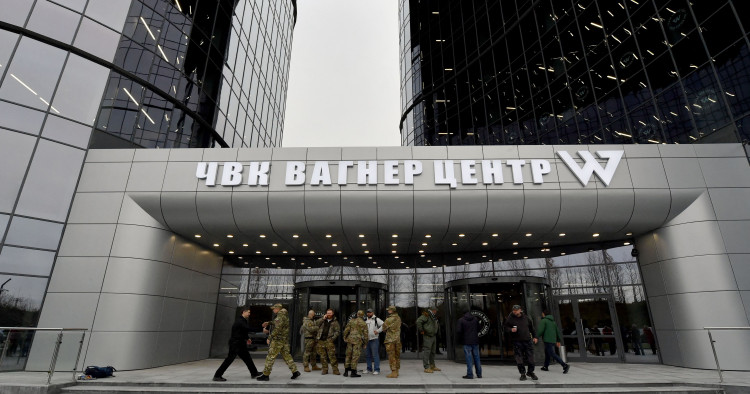 Until the Russian full-scale invasion of Ukraine in February 2022, the Wagner Group private military company (PMC) operated without drawing much attention to itself, often conducting clandestine operations to advance the Kremlin’s foreign policy. Though reports of Wagner activity occasionally emerged in regions that Russia sought to exploit for material and political gains, relatively little information on its origins and structure was readily available, and the Kremlin repeatedly denied any connection to the group and its activities. However, shortfalls of the invasion compelled the group and its founder, Kremlin-linked oligarch Yevgeny Prigozhin, to step out of the shadows and use the war to increase their power and influence. Though the mercenaries have yet to produce any significant advantage for the Russians on the battlefield, Prigozhin is taking power away from the traditional Russian military establishment and fostering President Vladimir Putin’s dependence on his resources and advice. This trend will undoubtedly propel the escalation of the war and possibly inflict irrevocable damage to the future utility of the Russian Armed Forces.

Origins of the Wagner Group

The controversy surrounding the Wagner Group begins with its obscure and legally dubious origins. An opaque network of private security groups, the Wagner PMC first emerged in 2014, during the Russian annexation of Crimea, and has since expanded its operations in Eastern Europe, the Middle East, and Africa. Though unconfirmed, theories trace the group’s name — apparently referencing Richard Wagner, known to be one of Adolf Hitler’s favorite composers — to the callsign of Dmitry Utkin, a retired colonel of Russian military intelligence service (GRU) and alleged co-founder of the group. Utkin’s Nazi sympathies are especially egregious in the context of the current Russian war in Ukraine, given that the official Russian narrative at the outset justified the “special military operation” as a campaign to supposedly liberate Ukrainians from neo-Nazis. Russian law explicitly prohibits PMCs, likely as a measure to prevent the formation of rebel militias, but allows private businesses and individuals to hire contractors for their own security needs. This legal loophole gives the Russian government a mechanism to exercise plausible deniability for any Russian mercenary activity and hide accurate casualty numbers in conflict zones, giving the false impression of greater success in potentially unpopular interventions abroad. Effectively, these mercenary forces — many of them backed by influential oligarchs with close ties to the Kremlin — have become a paramilitary arm of the Russian government.

Prigozhin’s admission in late September of having founded and bankrolled the Wagner PMC verifies this trend. Until then, Prigozhin — the owner of a lucrative catering company with a criminal history — had been the suspected but unconfirmed financial patron of the mercenary group, which purportedly earned considerable profits in Syria and sub-Saharan Africa by exploiting local political instability to extract natural resources. These countries have welcomed the Russian mercenaries as viable alternatives to Western powers with colonial legacies or ones unwilling to overlook local corruption or human right abuses. However, the Wagnerites have been implicated in numerous cases of harassment and intimidation of local populations and even civilian massacres. Western officials and analysts believe that the profits gained from Wagner’s and other PMCs’ exploits in these regions not only personally benefit oligarchs like Prigozhin but have also been financing Russia’s operations abroad.

From covert to overt

Reports of Wagner activity in Ukraine started to emerge from the beginning of the 2022 invasion. As Russia’s conventional forces pushed toward Kyiv and bombarded the capital and other major targets with air strikes and artillery fire, Ukrainian intelligence accused the Kremlin of dispatching squads of hitmen from the Wagner Group to assassinate key Ukrainian officials, including President Volodymyr Zelenskyy. But as Russia’s war effort faltered, Wagner fighters began appearing along the front lines “like normal army units” and integrating with conventional troops to combat the Ukrainian forces, according to a report from the British Ministry of Defense. By early October, British officials assessed that Wagner forces made modest gains in Donetsk Oblast and were reinforcing conventional Russian and Moscow-backed separatist forces in their campaign to capture Bakhmut. This sudden shift from what tended to be the PMC’s standard mission of limited, often covert operations to a more conventional form of combat to prop up the invasion demonstrates Putin’s increasing reliance on unconventional means to compensate for the Russian military’s shortfalls.

That said, Prigozhin’s mercenaries are far from the elite force that Russia needs to stop or reverse the Ukrainian counteroffensive, which began this fall. The Wagnerites’ exposure on the front lines to Ukrainian attacks creates force-generation issues similar to those plaguing the conventional military forces, and which the PMC’s involvement in the war was supposed to alleviate. Despite Wagner forces being made up in large proportion of fighters with ample combat experience, Ukrainian attacks on Wagner bases and the loss of experienced commanders are depleting the group’s most valuable assets and forcing them to replenish their ranks with ill-equipped, inexperienced recruits.

The Wagner Group’s mounting frontline losses have forced Prigozhin to turn to prison colonies, offering to convince the authorities to commute the sentences of convicted felons in exchange for the latter’s service in Ukraine. Recruiting prisoners comes with many problems — a decline in the PMC’s standards and an increased chance of its personnel contracting infectious diseases endemic to Russian penal colonies — that have decreased fighters’ morale and halted progress on the battlefield.

The erosion of the traditional Russian Armed Forces

Beyond the failures on the battlefield, Putin’s reliance on the Wagner Group has dire repercussions for the traditional military establishment. The Russian military’s poor performance in Ukraine has turned high-ranking officers into lightning rods for criticism by war hawks online and among Putin’s advisors. As the most vocal critics of the conventional military establishment, Prigozhin and Chechen leader Ramzan Kadyrov have recently led the charge against incompetent commanders, like the former chief of the Central Military District, Aleksandr Lapin, and the deceitful officials in the Ministry of Defense and General Staff who lie to Putin about the situation on the ground. Defense Minister Sergei Shoigu is a common target for Prigozhin, whose resentment toward the defense minister dates back to 2014, when Shoigu dismissed his deputy minister, who had been giving Prigozhin lucrative defense contracts. For now, Shoigu remains at his post, and Putin is taking a cautious approach to giving in to the hawkish faction’s demands. Yet as Prigozhin’s influence within Putin’s inner circle grows, the positions of these defense officials become increasingly tenuous, and a massive overhaul of the military’s leadership may be imminent.

Within the first eight months of the invasion, Putin removed at least eight generals from their commands, a high turnover rate emblematic of the dysfunctionality of the military and a sign of his growing dissatisfaction with the conventional forces. Hardliners like Prigozhin are exploiting Putin’s distrust of his military officers to advance their vision for the war and their political prospects. The appointment of Gen. Sergei Surovikin as commander of the Russian operation in Ukraine in early October is just one example of Prigozhin’s line of thinking being increasingly reflected in Putin’s decision-making. Notorious for his brutality as a commander, Surovikin caters to Prigozhin’s violent style, and so far, he has brought the tactical effectiveness that the hardliners found lacking in his predecessors. The oligarch notably endorsed Surovikin’s selection for this new role, and at a time when Putin is facing mounting criticism, he may continue to make decisions to appease these critics.

As the war continues, the detrimental impact of Prigozhin and his mercenaries on the military will extend beyond the leadership’s character and into future recruitment efforts and quality. At the moment, the Wagner Group’s enlistment of prisoners and other inexperienced fighters has likely diminished the reputation that it once held inside Russia. However, the war in Ukraine is producing battle-hardened veterans among the Wagnerites, while demand for Russian mercenaries in autocratic and unstable states like Burkina Faso persists. Aided by Prigozhin’s propaganda efforts, the false perception that the Wagner Group has better resources and offers more enticing financial benefits than the regular Russia Armed Forces may be drawing future recruits away from the traditional military. Despite only producing meager results on the battlefield, Prigozhin’s political access to Putin and control over the information sphere magnify the image of the mercenaries’ success and prestige while simultaneously destroying the military’s reputation.

Russia’s dwindling prospects in its war in Ukraine and Prigozhin’s growing political clout have transformed the Wagner Group from a shadowy group of covert operators into a trusted or at least necessary auxiliary force in the trenches. Putin’s increasing reliance on Wagnerites, despite Russia’s legal prohibition on private military companies, is eroding the military’s political power and pushing some future recruits away from joining the conventional Armed Forces. As Prigozhin strengthens his position within Putin’s inner circle, he could push for the Russian government to finally lift the ban on PMCs and pave the way for the Wagner Group to become a more overt and institutionalized instrument of Russian hard power. Prigozhin is hijacking the war to serve his political ambitions, neglecting the interests of the Russian state and its people. The mercenaries’ record of brutality and their patron’s preference for violent methods will likely exacerbate the human suffering caused by Russia’s war in Ukraine and further destabilize the region.

Hotaka Nakamura is an intern with the Frontier Europe Initiative program at MEI.

Tensions in Tbilisi: Is there a Russian migrant crisis?