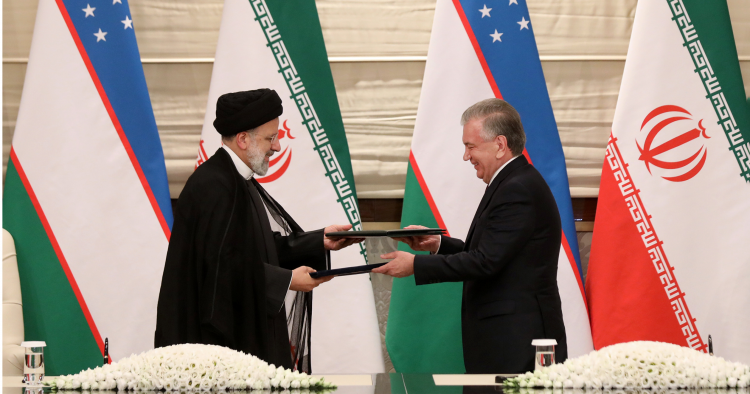 The 22nd Shanghai Cooperation Organization (SCO) summit in the Uzbekistani city of Samarkand this past September turned out to be a boon for Iran’s regional policy. Not only was the Islamic Republic extended a roadmap to join the grouping, but the meeting also offered a convenient opportunity to revive and strengthen ties with nearby Uzbekistan.

Ebrahim Raisi was the first Iranian president to travel to Uzbekistan in two decades — since then-President Sayyed Mohammad Khatami visited Tashkent in 2002. Although former Uzbekistani President Islam Karimov subsequently visited Tehran in 2003 — to participate in that year’s Economic Cooperation Organization (ECO) summit — Karimov’s long presidency (1991-2016) was undeniably marked by extremely inward-looking and conservative approaches to both domestic and foreign policies. Thus, relations between Iran and Uzbekistan at the time were cold and fragile, in particular because of two main factors. First was Tashkent’s concern about the influence of Iran on the Tajik-populated areas of Uzbekistan, especially the regions of Samarkand and Bukhara. The then-close ties between Iran and Tajikistan, along with the frigid and tense relations between Uzbekistan and Tajikistan, intensified this apprehension. Second, during the Karimov era, Uzbekistan feared the spread of political, Shi’ite, and revolutionary Islam by Iran and Tehran’s support for Islamist parties and groups beyond Iranian borders. This anxiety was partly fueled by the close relations between Iran and the Islamic Renaissance Party of Tajikistan. For this reason, even when Tehran made efforts to improve relations with Tashkent, the latter remained one of the main opponents inside the SCO of extending full membership to Iran.

However, this situation changed significantly after Karimov’s sudden death, in September 2016, and the coming to power of Shavkat Mirziyoyev. In foreign policy, Uzbekistan was able to improve its relations with a number of neighboring or regional countries and global partners by adopting the following policies: the “De-escalation Approach,” “Open Door Policy,” and “Interaction With Neighbors” (Kazakhstan, Kyrgyzstan, Tajikistan, Turkmenistan, and Afghanistan); “Creating Balance With Regional Powers” (Iran, Turkey, India, and Saudi Arabia); as well as “Creating Balance With International Powers” (Russia, China, Europe, and the United States). And when it specifically came to Iran, relations also warmed thanks to a concurrent deterioration in Tajikistani-Iranian ties as well reduced concerns in Uzbekistan about the ethnic and linguistic situation in the country’s Tajik regions.

Despite positive developments along the Tehran-Tashkent axis, however, the two countries faced a serious and new obstacle at the height of the Donald Trump administration’s “policy of maximum pressure” (2018-20) against Iran. When former Iranian President Hassan Rouhani’s planned visit to Uzbekistan was suddenly canceled in the summer of 2018, some news sources inside the Islamic Republic suggested this might have been the result of the meeting between Trump and Mirziyoyev in Washington that May.

After Joe Biden entered the White House in January 2021, the Mirziyoyev government’s apprehension about dealing more closely with Iran decreased. Moreover, Rouhani’s successor, Raisi, who came to power in Iran in August 2021, contributed to this warming trend by announcing the “Neighborhood Policy” and “Economic Diplomacy” as the two main foreign policy priorities of his government.

This months-long improvement in bilateral ties culminated with Raisi’s September 2022 visit to Uzbekistan to attend the SCO summit in Samarkand, which led to the signing of a Memorandum of Obligations by Iran to become a permanent member of the Chinese- and Russian-led organization. But notably, a day before this summit, on Sept. 14, Iranian and Uzbekistani delegations headed by Raisi and Mirziyoyev, respectively, sat down in Uzbekistan’s capital and signed 17 memoranda of understanding and cooperation documents in various fields. Two of these agreements are particularly significant.

First, Iranian Oil Minister Javad Oji and his Uzbekistani counterpart, Azim Ahmad Khojaf, declared that the two states will cooperate on supplying Uzbekistan with much-needed energy resources, including liquefied petroleum gas (LPG), jet fuel, heating oil, gas condensate, and petrochemical products; that Iranian firms would help develop Uzbekistan’s hydrocarbon fields; and that Iranian oil exports would restore the operational capacities of two Uzbekistani refineries, in Bukhara and Ferghana. According to Ahmad Asadzadeh, Iran’s deputy oil minister for international affairs, Uzbekistani refineries, which have a refining capacity of 230,000 barrels, are operating at 50% capacity. Iran could restore as much as 115,000 barrels of capacity at the two refineries in Bukhara and Ferghana. Thus, the lack of a new international agreement on the Iranian nuclear program as well as, relatedly, the continuation of Trump-era sanctions, especially on Iran’s petroleum exports, clearly no longer pose a major restriction or obstacle to the Islamic Republic’s ability to strike new oil cooperation deals with other countries, including Uzbekistan.

The second critical Iranian-Uzbekistani agreement to come out of the Samarkand talks was the signing of a memorandum of understanding on Uzbekistan’s use of the Chabahar Port, situated on the Gulf of Oman. Especially since the start of the Mirziyoyev presidency, double-landlocked Uzbekistan has been interested in making use of these port facilities to handle its exports and imports in order to reduce the Central Asian country’s dependency on trade routes via Russian territory. This has become especially crucial since the start of Russia’s massive re-invasion of Ukraine earlier this year, which put in doubt for many international logistics companies the continued viability of overland transcontinental transit via the Russian Federation.

This confluence of leadership changes, bilateral contacts, shared interests, and geopolitical shocks have encouraged and allowed Iran and Uzbekistan to work through many of their long-standing misunderstandings and tensions. As Iran’s president noted in Samarkand, trade between the two states has reached $500 million per year, and he expects this amount to increase 3-4 times.

Yet longer-term prospects for Iranian-Uzbekistani relations will depend on developments that have almost nothing to do with their bilateral ties. International negotiations on the revival of the Iran nuclear deal, the so-called Joint Comprehensive Plan of Action (JCPOA), is one such important factor. These talks currently look moribund. And any new deal is even more remote in light of the current situation inside Iran, after protests broke out there over a month ago. During previous waves of demonstrations, including those in 2009-10, January 2018, and November 2019, the Western negotiating parties notably hardened their positions in nuclear negotiations with Iran and held back on making any meaningful concessions to Tehran. The same dynamic is likely to play out now. And without a new nuclear deal, the U.S. administration will be highly unwilling to drop any of its Iran sanctions; whereas the Iranian government’s continued attempt to end the demonstrations could easily invite further economic restrictions. That said, some, such as Mohammad Marandi, an advisor to the Iranian nuclear negotiations team, are still of the opinion that the “Americans and Europeans are under a lot of pressure due to the Ukraine war, and the energy crisis in winter, and therefore they need an agreement with Iran.”

The uncertain and vague prospects for revitalizing the JCPOA may jeopardize Iranian-Uzbekistani oil cooperation. But Chabahar Port presents a different case, for which the powerful Indian lobby in the United States may prove a decisive factor. It is worth recalling that the Indians — who have also signed on to this highly strategic logistics project — succeeded in persuading the Trump administration to exclude the port of Chabahar from its package of economic penalties in 2018-20. Therefore, if the nuclear negotiations fail and the scope of U.S. sanctions on Iran continues or further tightens, the Indian lobby may again prove critical for leaving the door open to continued Uzbekistani-Iranian cooperation on Chabahar — so long as the United Nations Security Council does not reinstate its strict Chapter 7 sanctions against Iran. So while Tehran and Tashkent share a number of incentives to intensify their ties, particularly in the fields of energy and transportation, their bilateral relationship remains exposed to Iran’s relations with the great powers.

Dr. Vali Kaleji is an expert in regional studies, Central Asia, and Caucasian studies based in Tehran, Iran. He has published numerous articles on Eurasian issues with the Jamestown Foundation’s Eurasia Daily Monitor, the American Foreign Policy Council’s Central Asia-Caucasus Institute, and the Valdai Club. He can be reached at vali.kaleji@gmail.com.

Where is the US’s red line on Iran’s protests?