Sentencing the Political Fugitive to Confine the Islamist: Rizieq Shihab and Indonesian Democracy 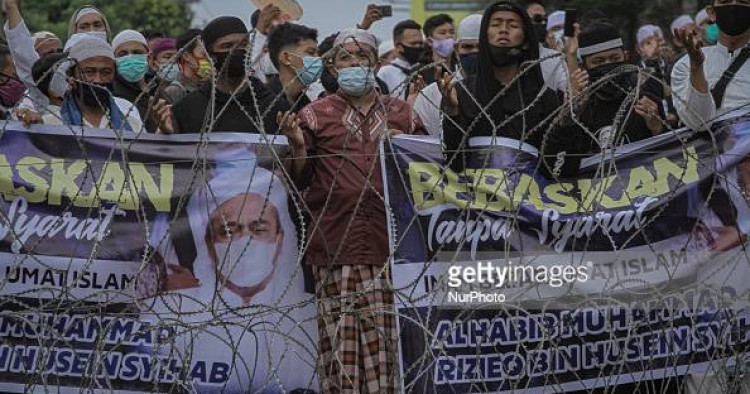 This article is part of the series on “COVID-19 in the Middle East and Asia: Impacts and Responses”. Read more ...

With the number of Covid-19 cases in Indonesia skyrocketing and threatening to overwhelm the medical system, President Joko Widodo’s administration is contemplating ordering another lockdown while pressing ahead to ensure its political nemesis remains locked up. On May 27, an Indonesian court sentenced Muhammad Rizieq Shihab (commonly known as Habib Rizieq Shihab, or HRS) — a leading Indonesian Muslim opposition figure and spiritual leader of the outlawed Islamic Defenders Front (FPI) — to an eight-month jail term and fined him 20 million rupiah ($1,400) for violating Covid-19 protocols by holding a religious gathering and the wedding of his daughter.[1] However, on June 24, a three-judge panel in East Jakarta District Court sentenced HRS to another four years in prison for lying about his Covid test results, and for “causing trouble” [2] under Law No. 1/ 1946 Article 14, which stipulates that “Whoever, by broadcasting false news or notification, intentionally causes trouble among the people shall be punished with a maximum imprisonment of ten years.”[3]

The latter case was part of a series of criminal trials that HRS — held in detention since December 13 — has been facing since returning from a three-year exile in Saudi Arabia. The verdict has generated dissatisfaction and anger among HRS supporters, who clashed with police outside the district court after the sentence was announced.[4] They believe the sentence is merely part of a political vendetta waged against HRS by his opponents, rather than a good faith effort to  uphold the law. Indeed, from March 2020 (the first case of Covid-19 in Indonesia) to July 2021, no other individual convicted of violating pandemic protocols were imprisoned; instead, they were merely harshly reprimanded or fined.

The application of the criminal justice system to HRS has long been politicized. His self-imposed exile in Saudi Arabia came on the heels of his being summoned by police as a witness for questioning over alleged pornography involving the exchange of graphic messages and nude photos.[5] Police named HRS a suspect under the 2008 Anti-Pornography Act — ironically, a law he had helped pass. HRS was also charged with insulting Indonesia’s Pancasila state ideology.[6]

In this, the world’s third-largest democracy, HRS has been a leading figure in criticizing the current Indonesian government. He and other leading Indonesian Muslim figures founded FPI or Front Pembela Islam (Islamic Defenders Front) shortly after the resignation in May 1998 of Suharto, following the collapse of support for his 32-year presidency. The FPI gained notoriety as a movement against immorality and moral deviation; its activities included raids on bars and nightclubs.

However, in recent years politics in Indonesia have changed dramatically. The 2012 Jakarta Province General Election and 2014 Presidential Election, followed by the criminalization of Basuki Tjahaya Purnama (BTP) or “Ahok” as Governor of Jakarta Province due to committing religious blasphemy in September 2016, have deeply divided the country —  between supporters and opponents of President Joko Widodo’s government.

The FPI had been among the prime movers resisting the current regime, along with Aksi Bela Islam (Action of Defending Islam) of 411 (November 4, 2016) and 212 (December 2, 2016) movements. The 411 and 212 movement forced the government to bring Basuki Tjahaya Purnama to justice in cooperation with GNPF MUI (Gerakan Nasional Pengawal Fatwa Majelis Ulama Indonesia — National Movement to Guard the Fatwa of the Indonesian Ulema Council.

While in exile in Saudi Arabia, HRS experienced various legal problems. He was “prevented” from leaving the jurisdiction of the Kingdom, falsely accused of using a fake visa and hoisting the ISIS flag. Even in the days leading up to HRS’s return to Indonesia, there was also a clandestine operation to cancel the return tickets for him and his family. Indonesian authorities made it difficult for HRS, while in Saudi Arabia, to engage in the political process and interact with Indonesian Muslims.

Indonesian Ambassador to the Kingdom of Saudi Arabia, Agus Maftuh, reportedly set three conditions for assisting HRS to return home. The first requirement was to be cooperative with Indonesian representatives in Saudi Arabia, including in conveying problems encountered in Saudi Arabia. Second, HRS was advised to withdraw the statement calling Jokowi an illegal president in light of the latter’s close friendship with and mutual respect for King Salman and Crown Prince Muhammad bin Salman. Third, HRS was advised to revoke his vow to not seek the assistance the Indonesian government because he viewed the regime as “unjust.”[7]

The Indonesian authorities have made various other attempts to silence and marginalize HRS and his supporters, including:

The campaign waged by Indonesian authorities against HRS should be viewed in a broader context. The Australian scholar Greg Fealy contends that the government of Indonesian President Joko “Jokowi” Widodo has been conducting a concerted and systematic campaign of repression against Islamists over the past four years.[8] Fealy expresses the concern that this anti-Islamist policy might erode human rights, undermine democratic values, and lead to a radical backlash against what is seen as growing state antipathy towards Islam.[9]

Fealy also notes that the Indonesian government often views Islamists as “extremists,” including in this category not only terrorists and supporters of the Islamic State but also members or sympathizers of legal Islamist parties and community organizations that have broken no laws.[10] So-called “trans-national Islamist” groups are especially regarded with suspicion — as they have their origins in or draw inspiration from Middle Eastern or South Asian movements and are thus seen as importing “alien” fundamentalist influence into the country.

Airlangga Pribadi and Milda Istiqomah go further, arguing that Indonesian democracy has been decaying under President Joko Widodo.[11] Numerous significant examples support their view: the banning of Hizbut Tahrir in 2017, the more recent weakening of the Corruption Eradication Commission (Komisi Pemberantasan Korupsi, KPK), the sudden enactment of the so-called Job Creation Law; as well as the banning of Islamic Defenders Front (Front Pembela Islam – FPI) and the fatal shootings of its members. Existing analyses focus on Jokowi’s “illiberal tendencies,”[12] demonstrated through the weakening of democracy, civil rights, and transparency of government institutions and strengthening established politico-business alliances.[13] Missing from this discussion, however, is the Jokowi government’s use of legal instruments to defeat the rule of law and the use of new and mainstream media to manipulate public opinion. How the government defends the concentration of wealth and power while keeping public support can be explained through the concept of  “new despotism.”

Pribadi and Istiqomah claim that the Jokowi government has manipulated the law and utilized coercion to repress its political opponents and undermine Indonesian democracy.[14] This enables oligarchic interests to crush the rule of law and replace it with rule through law. This makes Indonesia more susceptible to both corruption and state surveillance of public life. While it is too early to announce the death of Indonesian democracy, but it is not clear how its decay can be arrested.

Concerning the HRS case and its verdict, it is reasonably clear that the trial and its verdict were part of the politicization of the criminal justice system. According to Fealy, if Indonesia does indeed value tolerance and diversity, it should accept the legitimacy of Islamist discourses and associational activities.[15] Most Islamist views contravene no laws or regulations. Cracking down on Islamism, as in the HRS and FPI case constricts civil space — and makes Indonesia less democratic.[16]