The Shift to Majoritarian Politics and Sectarianism in India: Domestic and International Responses 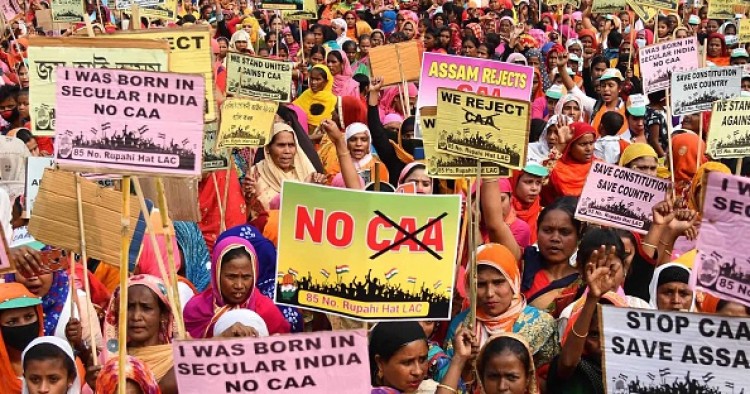 Are religious doctrinal differences primarily responsible for stoking intercommunal fear and hatred? What roles have state, sub-state, and transnational actors played in fomenting sectarian discord? And what could be done to avert sectarian violence; to foster tolerance and peaceful coexistence; and to promote reconciliation? The essays in this series tackle these and other salient questions pertaining to sectarianism in the MENA and Asia Pacific regions. Read more ...

There has been a visible shift towards majoritarian politics and sectarianism in India since the Bharatiya Janata Party’s (BJP) accession to power in 2014. The party has promoted a Hindutva ideology that declares India as fundamentally Hindu and as such, its culture should be viewed in terms of Hindu ideas and values. It also demands that all Indians, regardless of their religious orientations, adhere to Hindu ethos. The BJP also traces its values to the Indian civilization whereby the Abrahamic faiths are foreign elements and a threat to Hindus and Hinduism. While Muslims are framed to be regressive, dangerous and primitive, Christians as proselytizers. As for the other religious minorities including Buddhists, Sikhs and Jains, they are considered a part of the greater Hindu polity.[1] While the in-group is drawn as superior, tolerant, and compassionate, the out-group is cast in a negative light.

Since its re-election in 2019, the BJP under the National Democratic Alliance (NDA) has implemented a series of controversial Hindu nationalist policies that have been perceived as majoritarian, communal and intolerant in many domestic and foreign quarters.

Firstly, it abrogated Article 370 and curtailed the semi-autonomous status of India’s only Muslim-majority state, Jammu & Kashmir.[2] The government also increased militarization in the state, launched a widespread crackdown, and detained opposition leaders and activists, denying them due process. Additionally, it severed communication links and prevented access to journalists and activists from documenting and sharing information about the situation, including allegations of human rights abuses. The ongoing media blackout in Kashmir is the longest-running Internet shutdown to take place in a democratic country. The Indian government has also detained around 5,000 Kashmiris under the Public Safety Act that allows them to keep someone for up to two years without the right to a legal recourse.[3]

Secondly, it implemented the National Register of Citizens (NRC) in the state of Assam that excluded around two million people, pushing them to the brink of statelessness.[4] The only available remedy available to those excluded was through the Foreigners Tribunals, a quasi-judicial body where proceedings were arbitrary and decision-making was biased and discriminatory, particularly against women — who generally do not have much access to identity documents to prove their status. Over 1000 declared foreigners were detained in one of the six detention centers in Assam which are rife with overcrowding and has dire living conditions. Thus far, 29 people have died in these centers. Many others committed suicide fearing that they would be detained.[5]

Thirdly, the Modi government enacted the communally divisive Citizenship Amendment Act (CAA) in which “Hindus, Jains, Buddhists, Sikhs and Christians escaping persecution from India’s neighboring countries will be given citizenship in India”[6]. Many fear that the combination of CAA along with the proposed NRC — the administrative procedure to ascertain who is a citizen and who is not, might lead to countless Indians to lose their citizenship and become stateless, as it has happened in Assam where the NRC was first implemented. This has resulted in large-scale nationwide protests — the first pan-Indian spontaneous mobilization in decades. Insofar, five states have passed a resolution against the CAA and urged the central government to revoke it.[7] There has been criticism from the Indian Foreign Service too. Former Foreign Secretary of India Shivshankar Menon has said that the CAA was a “self-inflicted goal” and the opinion of India has changed after the law was passed.[8] While demonstrators have largely ensured peaceful protests across the country, BJP leaders have resorted to making hateful statements about the protesters, and authorities have failed to protect peaceful protesters from violence by the police and miscreants claiming to be supporters of the BJP and the Hindu nationalist ideology. The party has numerous factions in its heartlands where youths are recruited, radicalized and groomed to fight for the Hindutva cause.[9] Many believe these moves are meant to drive home the narrative that India belongs to Hindus. The Supreme Court judgement on the Ayodhya dispute which ruled in favor of Hindu nationalist groups, has also strengthened this narrative. At the same time, state-supported police brutality is shamelessly on display and social media is awash with images of violence, hate crimes, marches and protests.

The repercussions of dissent have also been felt outside of India. They have evoked strong reactions from sections the international community that has been receptive to the mass anti-CAA and anti-NRC demonstrations and minority sentiments. United Nations bodies on human rights and refugees have also been critical of new acts and have stressed that India should abide by its commitment to international human rights obligations.[10] Many world leaders have issued statements expressing concern over the implementation of CAA. Malaysian Prime Minister Mahathir Mohamad questioned the relevance of the CAA. "People are dying because of this law. Why is there a necessity to do this when all the while, for 70 years, they have lived together as citizens without any problem?" he asked.[11] He organised a summit in Kuala Lumpur involving the leaders of Iran, Qatar and Turkey urging reforms in the Muslim world.

The Organization of Islamic Cooperation (OIC) has also taken a strong stand on the recent moves undertaken by the Modi government. Following the revocation of A370, it held an emergency meeting at the level of Permanent Representatives to evaluate the situation in Jammu and Kashmir.[12] It also appointed a special enjoy for Jammu and Kashmir. Despite strong economic relations with New Delhi, Riyadh gave in to pressure from Pakistan to host an OIC meeting on the situation in Kashmir last year. The OIC has issued numerous statements about the situation in India in the last few months, urging New Delhi to “ensure the safety of the Muslim minority and the protection of Islamic holy places”.[13]

The international condemnation has not been limited to the Muslim community. The US Commission on International Religious Freedom issued a statement stating how the CAA undermines India’s history of religious pluralism, secularism and the Indian Constitution by large.[14] It even urged the US government to consider imposing sanctions on Indian Home Minister Amit Shah and “other principal leadership”. The Seattle city council in the US has even passed a resolution condemning the CAA.

In response to revocation of A370 of Jammu and Kashmir, two resolutions were tabled by US Congresswomen Pramila Jayapal and Rashida Tlaib, respectively. Although the resolutions were not passed in the US Congress, the scrutiny and criticism of India’s domestic affairs in the US policy community is significant. Key Democratic leaders James McGovern and Adam Schiff have also openly condemned the implementation of these acts. Furthermore, Indian Foreign Minister S. Jaishankar cancelled a meeting with the US congressional delegation when he found out that Jayapal would be present.[15] Instead of engaging critics, India’s leaders are acting with arrogance and boycotting meetings.

The list of international criticism drew longer when around 600 EU MEPs moved six anti-CAA resolutions in the European parliament in February 2020. The resolutions were submitted to the parliament by legislators from six political groups that comprise of the center-right and far-left. The strongly worded resolutions stated that the CAA law signals a “marks a dangerous shift in the way citizenship will be determined in India and is set to create the largest statelessness crisis in the world and cause immense human suffering.”[16] Although the vote has been postponed to March, there has been overwhelming support for the resolutions in the European parliament.

Protests are also taking place internationally across different cities against the CAA and NRC by Indian nationals living abroad. Many young individuals living abroad has joined their Indian counterparts to protest against what they feel is undermining the morals and values of their country. These protests may be small in numbers, but the nature of the demonstrations is similar. In Sydney, 60 Indians handed out flyers with information of the CAA outside a Starbucks outlet. One group in Germany managed to host 10 protests bringing together 600 Indians. Some of these protests have been sizable.[17] In London, around 500 people showed up for a protest outside the Indian Embassy in December 2019.[18] The protests by Indian diasporic groups are unique given that they are usually represented by conservative members who propagate a right-wing and non-secular version of India. Some Indians living abroad are able to resonate with these protests because they are minorities in a foreign country.

International criticism of India’s internal landscape might have also been aggravated by the country’s declining economy. In November 2019, Moody’s downgraded the outlook on India’s economy from stable to negative.[19] Earlier this year, the world’s leading political risk consultancy, Eurasia Group, which has traditionally been largely favourable in its assessment of India, particularly since 2014 – listed India under Modi as fifth of top ten biggest geopolitical risks of 2020.[20] “Prime Minister Narendra Modi has spent much of his second term promoting controversial social policies at the expense of an economic agenda. The impacts will be felt in 2020, with intensified communal and sectarian instability, as well as foreign policy and economic setbacks,” said the report.

It is a weakness of any democracy to dismiss criticism or dissent. The right to dissent is a civil right that distinguishes a democracy from an autocratic regime. It is not simply the Muslim world that is criticizing India; the international condemnation is widespread that cuts across various societies, institutions and individuals. Some have argued that the resolutions petitioned by the OIC, European parliament and US Congresswomen are weak in nature and non-binding. Furthermore, the European Union and leaders of countries have been conscious in distancing themselves from the resolutions that have been petitioned. Nonetheless, the scrutiny of India’s domestic issues in the international sphere is changing the global perception.

India’s international reputation as the world’s biggest liberal democracy with constitutional principles of secularism, equality, diversity and tolerance is being tested and Indian soft power could decline. India’s implementation of secularism was not intended to undermine Hinduism, rather to accommodate its wide spectrum of minorities. There is also a growing perception that New Delhi is not receptive to international opinion, especially after Jaishankar cancelling the meeting with the US congressional delegation. Moreover, the constant rhetoric that that its domestic issues are an “internal matter” does not help strengthen its case. While India may resist efforts to internationalize its domestic issues on the grounds that it would give Pakistan the moral high ground, it is affecting its own reputation. As Shivshankar Menon said in reference to India, “What we have achieved in the recent past is to hyphenate our (India's) image with Pakistan in a fundamental way, which is an intolerant state”.[21]  To be fair, notwithstanding claims of secularism and religious freedom, religious prejudice has always existed in India. While the Congress party has claimed to be a promoter of secularism and religious pluralism, it has played the Hindu card from time to time. Nonetheless, its homicidal expression has expanded exponentially since the BJP took office. BJP’s brand of nationalism has undermined India’ vibrant pluralist traditions, increased religious intolerance, social intimidation and tensions between the Hindu majority and minority groups, including religiously-inspired violence against the latter. The citizens of India, especially the youth are starting to form a united front and confronting fundamentalist discourse. India may yet achieve its promise of a composite culture of democracy, co-existence and inter-faith harmony despite the aggressive growth of hateful sectarianism.