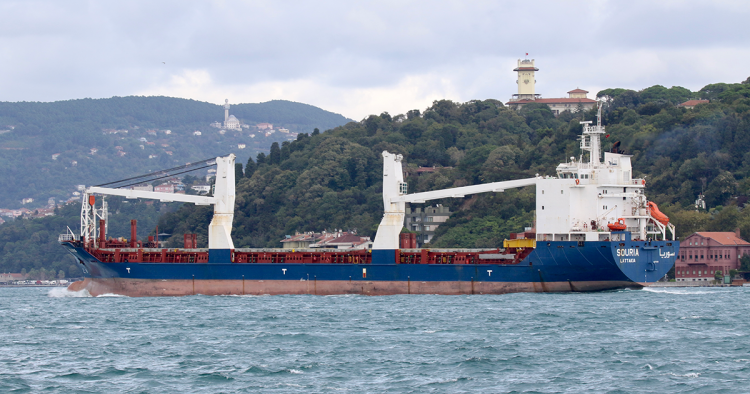 When Turkish President Recep Tayyip Erdoğan visited Ukrainian President Volodymyr Zelenskyy 18 months ago at Mariinsky Palace on a hilly bank of the Dnipro River, he saluted the honor guard with the traditional slogan Slava Ukraini! (“Glory to Ukraine!”). The honor guard returned the customary reply in seconds: “Glory to the Heroes!” Russia’s reaction may have been even faster. During the opening speeches to the 76th General Assembly of the United Nations, the Turkish president was as clear as ever when he said, “We attach importance to the protection of the territorial integrity and sovereignty of Ukraine, including the Crimea, whose annexation we do not recognize.” Again, Russia’s reaction was swift and unpleasant. It would seem that Turkey’s commitment to Ukraine outweighs its concern about Russia’s reaction.

But things are not as straightforward as they seem. 640 miles directly south of Mariinsky Palace, a dark blue, 450-foot cargo vessel navigates the Bosphorus without attracting much attention from the locals casually watching the maritime traffic pass by. What differentiates this ship, the Laodicea, from other vessels on the Bosphorus is that it is owned by SYRIAMAR, the Syrian government’s official shipping line, which is currently under U.S. Treasury sanctions.

SYRIAMAR operates three ships, the Laodicea, Finikia, and Souria. All three and SYRIAMAR itself are designated by the U.S. Treasury as being part of the income generating network of the Syrian Arab Army (SAA) and the Assad family. More curious than its notorious owner, the ship’s tracking data has been completely wiped. It appears as though the ship entered the Black Sea weeks ago, disappeared entirely, and is now departing the Black Sea without any signs of activity. However, careful analysis of the shipping data — and if lucky, pictures from ports, background from a local TV news channel, and more recently, satellite pictures — places these ships in the occupied ports of Crimea and Abkhazia.

More bizarre is that these ships are working almost exclusively out of Turkish ports. They carry construction material from Turkey to Crimea and Abkhazia and usually bring back wheat or scrap metal. The scrap metal trade appears to be using ports in the Gulf of Izmit, like Hereke. The entire trade is done openly with established companies, sometimes using their privately owned piers. Although the Turkish Chamber of Shipping issued a clear directive that no ship may depart from Turkish ports to occupied ports or return to Turkey from them, there is a collective desire to ignore the directive, and the Turkish government seems unwilling to enforce it, despite promises to Ukrainian and Georgian leaders.

What then explains the use of Syrian ships? As this article is being written, the SAA, backed by the Russian Air Force, is hitting the positions of Syrian rebels supported by Turkey, while at the same time SYRIAMAR is making money in Turkey by playing the middleman. As a result, Turkish trade supports an army that the Turkish government is indirectly at war with.

Furthermore, given the new drug trafficking routes originating in Latakia, it’s likely that the SYRIAMAR ships are involved in illegal side activities, like drugs or human trafficking, given that they hide their positions for days and weeks at a time. Syrian ships are neither the first nor the only vessels that operate from Turkish ports to occupied areas; a mixture of Russian and Turkish flag vessels have operated these routes, some of which can be seen in this Twitter thread. However, it is the activities of the SYRIAMAR ships that are perhaps the most colorful illustration of the inconsistencies of Turkish foreign policy in recent years.

In 2008-09, the Georgian Coast Guard tried to establish a sea blockade of Abkhazia. They intercepted, inspected, and detained vessels heading to the breakaway republic, including Russian ones. In 2009 alone, more than 20 vessels were detained. Moscow’s response was to create a division of the Coast Guard of the Federal Security Service (FSB) Border Service in Abkhazia's Ochamchira, equipped with high-speed Soboland Mangust-class vessels and supported by ships from the Black Sea Fleet. Shortly thereafter, Georgia abandoned the blockade attempts.

More than a decade later, Russia is using similar tactics, stepping up its military presence in the Black Sea and deploying landing and artillery ships of its Caspian Flotilla there. At the same time, Moscow announced that from April 24 to Oct. 31 three sections of the Black Sea would be closed to foreign warships and non-commercial vessels due to a naval exercise. The ban does not apply to foreign commercial vessels, but it does apply to Ukrainian naval ships and port vessels, the latter being mostly tug boats. By sealing off a section of the Black Sea near the Kerch Strait, Russia effectively closed the strait to the Ukrainian Navy, in violation of the 2003 bilateral agreement on its use and that of the Sea of Azov.

In response, on Aug. 19, President Zelenskyy announced his 2035 plans for Ukraine’s Navy, which involve creating infrastructure for the construction of its naval fleet, including small submarines, corvettes, and small armed boats. In addition, Ukraine will begin building naval bases, the first of which will be in Berdyansk, and Zelenskyy specifically mentioned both the U.K. and Turkey will be involved.

Turkey’s official policy supports the territorial integrity of Ukraine and Georgia, and it sells UAVs and ships to Ukraine. Hoping to purchase jet engines, it may also make a significant investment in Motor Sich, the Zaporizhia-based engine manufacturer. Yet, trade continues with the Russian-occupied territories of Abkhazia and Crimea. By allowing this illegal trade, Turkey undermines both its own credibility and its trading partners’ security. Shipped goods not only help connect occupied zones to Russia, but trade also brings hard currency into these zones, which are outside the international banking system.

So why is Turkey assisting Russia in cementing its illegal occupation? The short-term gains made by Turkish companies from this trade must be viewed in the larger Black Sea context. Russia has invaded and militarized these zones, deploying K-300P Bastion-P (NATO reporting name SS-C-5 Stooge) coastal defenses armed with P-800 Oniks anti-ship cruise missiles. This makes Ukraine’s Navy and its coastline — practically the entire central Black Sea — a continuous target.

While Russia is unlikely to ever return to its original borders or accept the independence of the occupied countries, allowing its occupation to become permanent will change the military and commercial balance in the Black Sea for decades to come. And the country with the most to lose from that is Turkey.

The need for regional cooperation

The need to prevent illegal shipping, as well as the dispute over state borders and fishing stocks in the Azov Sea, will remain sore points in relations between Ukraine and Russia for a long time to come. All Black Sea countries, Ukraine and Georgia in particular, will need protection from Russia’s growing military presence. Russia's actions pose a threat both to Ukraine's infrastructure in the Sea of Azov and the Black Sea basin and to trading routes in international waters. Reducing this threat and re-establishing the right to free maritime navigation is in the interest of Ukraine and other Black Sea countries, such as Bulgaria, Georgia, Romania and Turkey.

Today, a storm is brewing over the Black Sea, and at this point, the only question is how strong it will be. Instead of trying to play all sides and make a quick buck by allowing illegal shipping, Turkey should lead NATO’s presence in the Black Sea by promoting a permanent naval group and air policing similar to the Baltic States. Turkey has the military capability and capacity to do this if its politicians can manage to align its political and economic interests.

Yörük Işık is a geopolitical analyst based in Istanbul, where he runs the Bosphorus Observer, a consultancy analyzing maritime activity on the Turkish Straits. He is also a non-resident scholar with MEI’s Turkey Program. The opinions expressed in this article are his own.