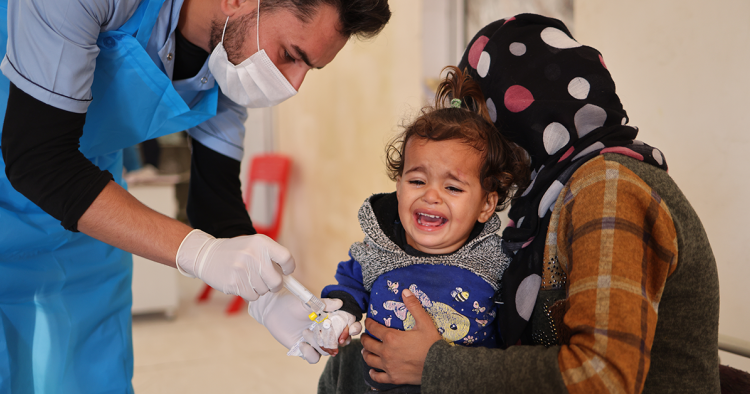 Cholera continues to sweep through Syria and Lebanon at an alarming pace, leaving thousands sick and hundreds dead in its wake, with only a small fraction of cases officially registered in databases.

Nevertheless, it is clear that the number of cases of the bacterial disease in both countries is steadily increasing, with UNICEF estimating the total in Syria at 35,569 while the Ministry of Public Health puts that in Lebanon at 3,369. According to the EU, the causes of the outbreak in Syria include drought, economic decline, and the battered state of the country’s water infrastructure, which leaves 47% of the population relying on unsafe sources of water for their daily needs.

Cholera is contracted by ingesting contaminated food or drinking water and causes intestinal problems and dehydration that can be fatal unless treated quickly. The key to fighting off the disease is good hygiene and clean water, yet in some remote and undeveloped areas in Syria access to these is scarce, meaning there is a real chance that the number of cases could soar.

U.N officials have previously expressed concern about the problem and Syria Coordinator Imran Riza has warned that “the outbreak threatens the whole region.” With cases now on the rise in Lebanon, unless the international community takes swift action, cholera may continue to spread.

Cholera was eliminated from Syria 14 years ago, but after the mass contamination of the Euphrates River with sewage water and the subsequent usage of unclean water to irrigate crops, cases began to spread rapidly and there was little the health services, already stretched beyond their capacity, could do to address the problem, Randa Youssef, a healthcare worker in Damascus, told MEI. “It’s not normal to have this many cases. There is a fundamental problem with the water supply affecting certain foods. We tried to tell people, to raise awareness, but it hasn’t been successful. Some [people] don’t even get checked; they struggle with the dehydration. Others even got cholera and thought they had the coronavirus,” Randa said.

“We need a strategy and a nationwide effort to make people aware of what cholera is firstly and then enforce the right action. Food must not be contaminated, while water must be clean at the source, or it will only get worse,” Randa continued.

In late September thousands of people across Syria started complaining of acute diarrhea, and the number of cases has grown steadily since. In the village of al-Bayadia in Homs Province more than 140 cases of hepatitis were discovered, the spread of which is also related to a lack of clean water and poor sanitation and hygiene. The outbreak was linked to the mixing of water with sewage, underlining the severity of problems with water safety in Syria.

Dr. Maad Choubasi, the province’s director of health, confirmed that “the outbreak was a result of drinking from unreliable water sources [wells] due to the scarcity of water in the village. We analyzed the wells and found that they are not suitable for drinking.”

The director added that water tanks in schools must be inspected and sterilized completely as well, adding that, “We need to find solutions for water in these villages to avoid injuries later. Hepatitis infections are periodically recorded as a result of water scarcity, and it decreases with the progression of the winter season and heavy rains.”

According to the International Rescue Committee (IRC), part of the cholera outbreak was due to cowboy merchants near the Euphrates River running a water scam, whereby they sold unclean water from unregulated trucks and billed it as clean.

But Syria’s problems with water treatment are far broader and largely due to the impact of the decade-long war: Nearly two-thirds of the country’s water plants, half of its pumping stations, and one-third of its water towers have been damaged because of the conflict.

There have been over 90 deaths in the country so far, according to official numbers — the unofficial total is thought to be higher — and 35,000 suspected cases. The scale and speed of the outbreak has prompted the EU to act, providing €700,000 in humanitarian aid to contain the epidemic.

As Janez Lenarčič, the EU commissioner for crisis management, noted, “Almost half of Syrians rely on unsafe water sources for their daily needs. This is the result of almost 12 years of conflict made worse by a severe economic crisis and prolonged drought. The EU is joining efforts to curb the epidemic.”

However, when it comes to the broader issue of water treatment infrastructure, the country’s needs are far greater than its current capacity. According to the 2022 Syria Humanitarian Needs Overview, approximately 70% of sewage is discharged untreated, contaminating the source of drinking water for millions of Syrians. Given the scale of the problem, more needs to be done to fix the country’s water treatment capacity or cholera will invariably return again in the future.

As the outbreak in Syria has grown, cholera has spread to neighboring Lebanon, which itself suffers from an economic collapse, an ongoing political crisis, and a plethora of other problems. The transmission of the disease has been facilitated by the free movement between the two countries. Lebanon is home to a large number of Syrian refugees, estimated at 1.5 million, or one-fourth of the total population.

After cholera spread to Lebanon, the World Health Organization (WHO) assessed the risk of an outbreak there as high due to the shortage of drinking water and the country's fragile and strained health system. A lack of electricity and a significant shortage of fresh water in Lebanon have placed further pressure on the system.

The first cases in Lebanon were reported in early October. Speaking about them at the time, Lebanese Health Minister Firas Abiad said, “The common point between these cases is the majority of patients are displaced Syrians.” He added, “The absence of basic services, like safe water and sewage networks, in places where refugees gather constitutes a fertile ground for the epidemic too.” According to official figures from Lebanon’s Ministry of Public Health, as of Nov. 13 around 3,369 people have been infected and 18 have died in the first cholera outbreak in the country in more than 30 years.

Given the continued mixing of sewage and clean drinking water, the cholera threat has now ballooned in both countries to potentially dangerous proportions as crops and food become contaminated and cases spread. Unless more is done, the crisis will worsen quickly.

UNICEF has taken rapid action to help with the effort in Lebanon, distributing 80,000 liters of fuel to water pumping and wastewater treatment stations in locations with confirmed and suspected cases, as well as procuring emergency medical supplies to treat cholera, such as oral rehydration salts and treatment kits. The WHO has also gotten involved, helping to arrange a shipment of 600,000 doses of cholera vaccine. A vaccination campaign in Lebanon was launched on Nov. 12 targeting both Lebanese and refugees.

The epidemic is spreading quickly in both countries and threatens to plunge Syria and Lebanon into more uncertainty, despair, and crisis. Unless the fundamental drivers are addressed and water treatment plants and facilities, especially in Syria, are improved, outbreaks will no doubt reoccur in the future with regularity.

Danny Makki is an analyst covering the internal dynamics of the conflict in Syria and a non-resident scholar with MEI's Syria Program. He specializes in Syria’s relations with Russia and Iran.