Tensions in Tbilisi: Is there a Russian migrant crisis? 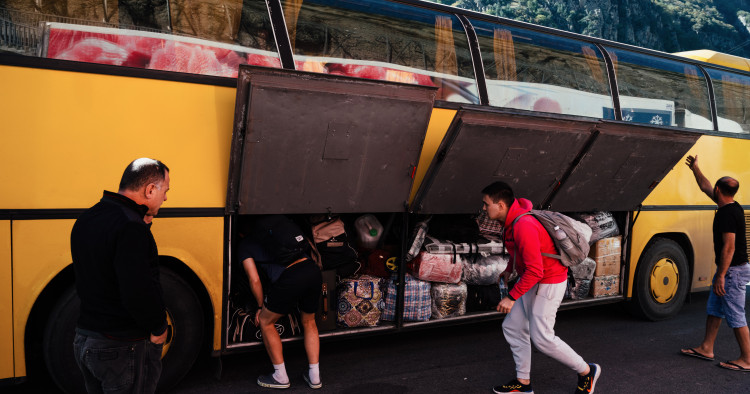 The following article is based on research conducted under the State Department’s Title VIII Fellowship, for the Frontier Europe Initiative at MEI.

Georgia and Russia have a complicated and violent history going back centuries, though punctuated most prominently in modern times by the Russian invasion in August 2008 and the occupation of Georgia’s separatist regions of Abkhazia and Tskhinvali (South Ossetia). Since Russia’s large-scale, unprovoked attack on Ukraine in late February 2022, the already difficult relations between Moscow and Tbilisi became even further strained. In part, this added pressure was related to the Georgian government’s efforts to internationally condemn Moscow’s actions in Ukraine while at the same time doing all it could to stay out of the war or becoming the object of renewed Russian military aggression itself. But additional stress also came as a result of the influx of Russians with limited options, namely Georgia, Turkey, and Cyprus, leaving their home country since the start of the war.

I spent this past summer (June and July 2022) conducting fieldwork in Georgia as a Title VIII Black Sea fellow with the Middle East Institute, and within two months of being in the country, I could see the changes in popular attitudes and the growing frustrations in the capital city of Tbilisi. One of the major outcomes of the 2003 Rose Revolution was the gradual emergence of a latent educated middle class that is still crystalizing in Georgia. Though this stratum of Georgian society has experienced both numerical and economic stagnation in recent years due to the COVID-19 pandemic, the ongoing Russo-Georgian war, and resultant inflation, the educated youths’ desire for Georgia to integrate with the European Union is still apparent: the members of this group specifically want to pursue employment and educational opportunities in Europe.

At the time I was conducting research in Tbilisi, the more dominant narrative was a general frustration with the EU’s decision, on June 23, not to grant candidate status to Georgia because of a cited lack of progress by the Georgian government to reach compliance with the EU’s criteria. However, a concurrent theme was overarching negative sentiments toward the increasing number of Russians fleeing to the country. It was not uncommon to hear someone say something along the lines of, “I understand they can’t control where they are from, but I could never be friends with a Russian.” Since I left Tbilisi, over 100,000 Russians have fled to Georgia, and resultant social tensions in Tbilisi have only increased as the Russo-Ukrainian war has gone on. Many of the Russians who arrived in Georgia are male reservists seeking to avoid being drafted and sent to the front lines. This influx of Russians has increased the already high rent prices in Tbilisi, exacerbating the overall economic strain and Georgia’s existing housing crisis.

Emotions are largely dictating popular perceptions of Georgian-Russian ties, which were already intensely complicated and marred by a violent history. According to the latest International Republican Institute (IRI) polls, conducted mainly through the second half of September, attitudes toward Russians in Georgia are quite negative. When Georgians were asked “Do you support allowing Russian citizens to do any of the following,” with the options being, “enter Georgia freely without a visa, register a business, purchase property, or don’t know/don’t answer,” 78% said they do not support any of the above. As a further embodiment of the tense situation between Russia and Georgia, Dedaena Bar in Tbilisi opted to require local Russians to sign a form denouncing Russian President Vladimir Putin and the recognition of Abkhazian and South Ossetian sovereignty prior to being allowed entrance. This policy sparked a cyber campaign by pro-Russian groups to harass and poorly rate the bar online. Such examples offer a glimpse of the bitter emotions rampant in Tbilisi; tensions are only rising as more Russian migrants enter the country.

Competition for jobs was high in Georgia even prior to the influx of Russians. So the arrival of tens of thousands of working-age, often high-skilled individuals from an antagonistic country could, if it has not already, lead to further frustration among Georgians, particularly youth seeking high-paying job opportunities in the country. These frustrations, combined with disillusionment over the lack of EU integration compliance by the Georgian government, could lead to change or strain in domestic politics. The ongoing and growing Russian migrant crisis is likely to continue to dominate the nightly news cycle as one of the main topics nationalist politicians and Russia itself can exploit or weaponize for political gain.

Like in many countries, personality politics largely dominate the political sphere in Georgia, and disinformation is rampant. During times of political turmoil, disinformation frequently seeks to exacerbate existing issues, as seen in the Kremlin’s attempts to perpetuate falsehoods during the COVID-19 pandemic against the Azerbaijani minority communities in Georgia. Whether or not disinformation is homegrown or perpetrated by Russia, it is imperative for citizens and the Georgian government to be aware of this threat and take preventative steps against it. Given the tense political situation in Georgia due to the Russo-Ukrainian war and the influx of Russian migrants, there is certainly potential for further destabilizing media narratives and political exploitation of this turbulence.

In Georgia, talking about the increasing number of Russian migrants is not a comfortable conversation, particularly in light of all of the history and trauma (for Georgians especially) that has transpired between the two states. But that is exactly why it is imperative that policymakers in Georgia and the international community start having open and honest discussions about the impact of this population wave and its longer-term prospects. As the settlement of the Russian migrants becomes more permanent, there is an increasing need for social programs to address the growing ethnic tensions, since to date few, if any, have been attempted. International and non-governmental organizations need to work on peaceful communication-based settlement programs between Russians and Georgians to allow for dialogue between the two groups so that tensions do not lead to outright violence. Regardless of whether the influx of Russians escaping the war by coming to Georgia is characterized as a “migrant crisis,” clearly the tensions this situation has generated in Tbilisi need to be diffused. By directly addressing the influx of Russian migrants into Georgia and the potential implications that this may have for Georgian society, the international community can seek to promote policies or programs to facilitate dialogue and communication that could help to mitigate the above-mentioned risks. Until then, it should be our responsibility to encourage asking uncomfortable questions about the impact of Russian migrants in Georgia.

Allison Hart is a Black Sea State Department Title VIII Fellow with MEI’s Frontier Europe Initiative. She is also a graduate student at the American University in Cairo studying Political Science with a specialization in International Relations.