Is there room for reconciliation on Syria? 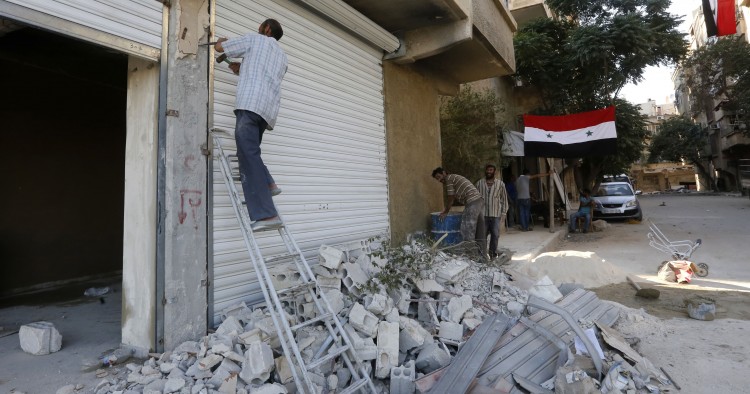 As the military phase of the Syrian conflict winds down, the political one is gaining momentum. This is not to say that the most complicated part of the civil war is over, but rather the opposite: The conflict is now entering a more difficult period in which the parties will be forced to address the most sensitive issues about postwar Syria, including reconstruction, return of refugees, political reforms, reconciliation, spheres of influence, and other challenges.

International meetings in Sochi, Tehran, and Istanbul have pushed for the launch of a political process and intra-Syrian reconciliation. It is important that this stage is also accompanied by reconciliation between Damascus and regional Arab states that cut diplomatic ties with Syria over six years ago. In this regard, the trilateral Astana format misses one important factor: representation of regional Arab states. Although Russia, Iran, and Turkey formed a partnership and took the lead in the Syrian crisis, they lack support from the Arab states. For now, it appears that non-Arab powers want to push their own vision of post-conflict development in Syria, one that does not fully reflect the plans and aims of regional Arab actors.

This is why reconciliation between Damascus and other Arab capitals is a prerequisite for a sustainable resolution to the Syrian conflict. Although the task looks increasingly challenging, if not impossible, without it the conflict will likely drag on. Eventually, political, economic, and diplomatic ties between Damascus and regional actors must be restored, and Syria will need to be reintegrated into the “Arab family.” The Gulf states––mainly Saudi Arabia, the UAE, and Qatar––are essential to achieving these goals, and they need to be included as participants in the political phase of Syria’s reconstruction and reconciliation.

There is a fair degree of skepticism about the reconciliation process. Saudi Arabia, the UAE, and Qatar began to call for the resignation of President Bashar al-Assad from the first months of the Syrian uprising and were strong backers of various opposition groups and armed militias, providing them with financial, logistical, and political support. Overcoming this hurdle will be a challenge, and both sides will need to want to reconcile for compromise to occur.

The Saudi-led Gulf Cooperation Council (GCC) perceives Iran as a major rival that has gained influence across the region in recent years. Iran’s growing economic, military, and political presence in Iraq and Syria has been a serious cause for concern. The partnership between Damascus and Tehran is seen as a significant obstacle to Syria-Gulf reconciliation and is viewed warily by other regional actors as well, including Israel, Jordan, the U.S., and the EU.

For its part, the Syrian government still remains quite reluctant to compromise with the Gulf states, even though they could be helpful in the country's reconstruction and reintegration into the regional economy. The government has not forgotten that Iran sided with it early on in the uprising, at a time when everyone else abandoned it.

Light at the end of the tunnel?

At the same time Syria's heavy reliance on Iran could also be positive factor in helping to promote reconciliation between Damascus and its Arab counterparts by creating an opening for the GCC states to play a greater role.

In the last 15 years, Tehran has benefitted from regional changes such as the U.S. invasion of Iraq, the Arab Spring, and the wars in Syria and Yemen. Non-Arab powers like Iran and Turkey have increased their influence in the Middle East at the expense of traditional Arab powers. The same applies to Riyadh, however. As Iraq, Egypt, and Syria declined, Saudi Arabia emerged as the strongest Arab actor, filling the vacuum of power. Eventually though, this put Saudi Arabia in the difficult position of countering the rising influence of its non-Arab rivals, Iran and Turkey.

Iran, Russia, and Turkey effectively sidelined all of the major global and regional actors, limiting their capacity to influence the conflict in Syria. After Russia deployed its military in the fall of 2015, the GCC states began to realize that the Assad regime was there to stay and that they were going to lose most, if not all, of their “investments” in the country. To secure their influence in postwar Syria, the Gulf states had to develop better ties with Moscow. In addition to that, to minimize their losses in Syria, the Saudi-led GCC states might want to reconcile with Damascus and to participate in the country’s reconstruction and economic development. To make Damascus less politically and economically reliant on Tehran, the UAE and Saudi Arabia could co-opt Syria by offering financial aid and joint economic projects.

Even though it sounds quite ambitious, there is a strong rationale for a Gulf partnership from the Syrian side. Iran’s economy is in dire straits and the new U.S. sanctions will have a further negative impact. In turn, this will also affect the Syrian economy, which is increasingly dependent on Iran. In addition, there is no prospect that sanctions on Syria will be lifted if Damascus stays in Tehran’s close orbit. It also remains unclear if the Europeans will decide to go against Washington and implement a special purpose vehicle (SPV) as a sanctions workaround to maintain trade with Iran. This too suggests bad news for Syria. Damascus would benefit from diversifying its economic partners. Being tied to Iran economically, politically, and militarily limits Damascus’s ability to reconcile with countries in the EU and GCC that can offer much-needed money and technology to aid in reconstruction and development.

There have been signs of movement, however. Syria's foreign minister, Walid al-Moallem, had a surprisingly warm encounter with his Bahraini counterpart, Khalid bin Ahmed al-Khalifa, on the sidelines of the United Nations General Assembly in September 2018. In November reports emerged suggesting that the UAE could re-open its embassy in Syria, which has been shut for  six years. This has raised questions as to whether the Gulf countries are reconsidering their relations with Damascus as Syria’s war moves into a new political stage.

While it may seem surprising, such a move is inevitable for several reasons. First, after Russia’s military deployment, Saudi Arabia, the UAE, and Qatar realized that they lost the war in Syria. Second, Moscow seems to have convinced the GCC that the stronger the Syrian state is, the weaker Iran’s presence will be. Third, a stable, strong, and independent Syria will hinder the rise of Tehran’s influence in the region. Fourth, the GCC needs to compensate for its losses in Syria through reconstruction and economic projects. Fifth, it is crucial for the region’s new security architecture that the GCC secure a degree of influence in defining Syria’s future.

Certain questions still need to be answered though. How is Iran going to react to a potential Syria-GCC reconciliation? How will Turkey respond to the GCC’s aim of co-opting the Syrian government, especially given that Saudi Arabia and the UAE oppose the Muslim Brotherhood? All of these issues will play an important role in determining the future of the Syrian conflict. However, as things stand now, it is more rational for all actors involved to take the path of compromise than to pursue any road that prolongs the confrontation.