Time to flip the script on Iran 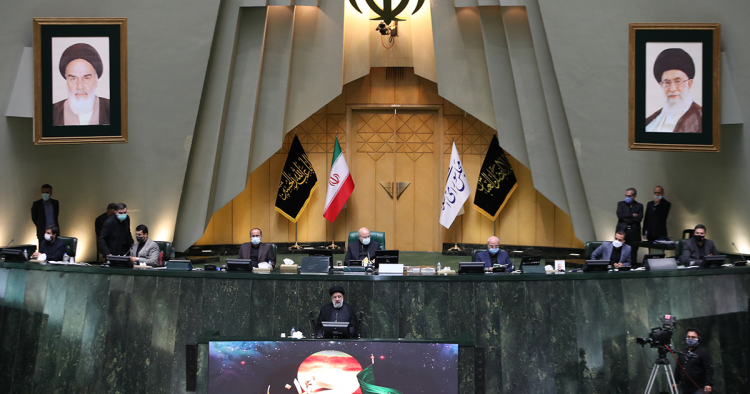 Since 1979 U.S. policies toward Iran have alternatively ranged from some version of “maximum pressure” to appeasement and back again while maintaining the same assumptions and calculus: the clerics would ultimately fall when the elite and middle class had enough and were willing to pay the price for revolting. The logic was that Iranians were Persians first, and even those who had supported the revolution’s ideals would ultimately lose faith with the clerics for having betrayed them in a quest for power at the expense of the country’s history, culture, and fortunes. Today, however, the landscape is evolving. While Iran’s leaders appear to be adapting, U.S. thinking is rooted in the past.

America’s Iranian policy has swung with the ebbs and flows of leaders who debated whether it was better to allow internal Iranian opposition to develop organically, or to help it along, whether the goal was regime change, or influencing behavior. And if an active rather than passive approach, was it better to covertly facilitate those willing to challenge the clerics, or provide overt political and material support while confronting the regime head on with strangling economic sanctions and military muscle?

Cycling in and out of Iranian operations for much of my 34-year career in the CIA’s Clandestine Service, I was privileged to enjoy an intimate understanding of Iranian dynamics and perspectives through the Iranian agents I ran across the strata of society and the subject matter experts with whom I worked throughout the U.S. Intelligence Community. And like many of my colleagues, I experienced the frustration from a repeating pattern of miscalculations, emotions, and hubris in the actions taken by Iranian and U.S. decision makers despite how well those in the Iranian and U.S. intelligence communities seemed to know one another — and we do. But that prevailing dynamic forged by an inordinate love-hate obsession among the two countries’ respective decision makers was consistently the ultimate difference maker when it came to policy.

Iranian and American politicians and pundits ironically share some of the same proclivities when it comes to their interaction, whether in the public’s eye, or through more discreet back-channel engagements. The experience is not unlike a Seinfeldian airing of the grievances that often becomes heated and trumps sober analysis and planning. Patience, predictability, and consistency can bear fruit when both sides are working off the same risk versus gain calculations and seek a pragmatic Aristotelian means to achieve mutual interests, as evinced with the 2015 Joint Comprehensive Plan of Agreement (JCPOA). Today’s danger stems from miscalculation owing to misunderstanding.

The U.S. Intelligence Community’s consensus has long been that Iran’s violent confrontation with the U.S. presented a credible national security threat. While Iran’s direct and proxy attacks against the U.S. and its allies and its support for al-Qa’eda senior leaders living in its capital escalated following former President Donald Trump’s May 2018 withdrawal from the JCPOA, the fundamental judgment remains valid today. But it was those same Trump White House policies that set in motion the conditions that altered Iran’s internal power dynamics and the key assumptions that long influenced our policy choices, as well as theirs.

The forces of change within Iran that the U.S. sought to empower are no longer found in the elite or middle class, but rather in its growing working class and poor. And Tehran’s increasingly conservative, confrontational, and isolationist direction aims to invest in that demographic even as U.S. actions still target a segment of society that has decreased in size, influence, and willingness to act.

U.S. maximum pressure has had devastating economic and humanitarian consequences for Iranians, but also served to increase the size and influence of poorer segments of society which Iran’s revolutionary leaders know helped bring them to power in the first place, and whose sheer numbers pose the greatest threat to their hold on power. Despite occasional flirtation with internal political liberalization and external outreach under Akbar Hashemi Rafsanjani, Mohammad Khatami, and Hassan Rouhani, 42 years of repression, intimidation, arrests, executions, and brain drain have reduced the number of opponents from the elite and middle-class communities that have shrunk in size, influence,or threat to the regime.

While it might be fair to suggest the Green Movement reflected this demographic’s potential, the U.S. gave only lip service and stood by as it was summarily crushed. And whatever momentum the 2019 riots might have generated was undermined by the U.S. strike against Islamic Revolutionary Guard Corps (IRGC) Quds Force Commander Qassem Soleimani, despite a subsequent hopeful outpouring of anger at the clerics and IRGC after their destruction of Ukraine International Airlines Flight 752.

The seemingly arranged 2021 presidential election of Supreme Leader Ali Khamenei’s prospective successor Ebrahim Raisi reflects decreasing regime concern for the threat from an unhappy and restive elite or middle class and recognition that the larger poor and working class segments of society require monetarily and politically less to manage their expectations. Iran’s leaders believe they can now decrease reliance on the broader global economic community and still meet this larger demographic’s basic needs by virtue of a concurrent tilt toward Russia and China, internal self-reliance, and IRGC covert procurement mechanisms.

For the time being at least, the decades-long competition between those in Tehran’s globalist and isolationist camps has been decided. The globalists who sought the benefits of constructive engagement with the U.S. and international economic integration to accelerate Iran’s economic fortunes — often mislabeled in the U.S. as “moderates” or “reformers” — have lost, thanks largely to President Trump’s maximum pressure policies. The isolationists among the clerics and IRGC embrace confrontation with the U.S. and reduced dependence on economic incentives the U.S. and its Western allies could leverage. The power and influence accrued from the flow of illicit commerce they facilitate makes them the big winners.

The new power dynamic, the country’s economic path, and the public’s ensuing conditioning to deprivation have allowed the clerics and IRGC to become more emboldened in solidifying their gains and dismissing even the pretense of pluralistic governance. An interesting behavioral outgrowth has been the hardliner’s increasing employment of Iranian nationalism as opposed to religious fervor in justifying and normalizing their actions. This direct appeal to the larger poor and working-class elements of Iranian society capitalizes on a community that is not innately inclined to embrace the U.S., the West, or its values and is more receptive to the cleric’s narrative of standing up for them against imperialists and bullies who seek to exploit and strangle Iran.

This new dynamic does not come without opportunities on which the U.S. can capitalize, and the hardliners might regret getting what they wished for, at least, prematurely. Increasing Raisi’s ownership of Iran’s economic fortunes, its deteriorating health conditions, and national security challenges both near and far, also removes the protective layer of a president who could heretofore play the fall guy for government misfortunes and failure when he’s perceived to be Khamenei’s hand-picked successor. There’s similarly no buffer for the IRGC and its most senior current and former leaders whose greater public profile and responsibility for governance require them to own the results, for better or worse, and could make them the lightning rod for anger and discontent.

It’s also well worth remembering that while Iran’s hardliners hold an increasingly dominant position, exploitable rivalries and competition for power among them also provide entry points the U.S. can manipulate, and must at least understand. In Iran’s history, the pursuit of power has often been achieved through pragmatism and deal making rather than ideology. That translates into opportunities for the U.S. to achieve progress addressing Iran’s malign behavior and nuclear program even with Tehran’s current leaders.

Among the approaches the U.S. could take would be playing rivals off one another, stirring up public agitation, and nurturing opportunistic pragmatists from within the hardliner camp. There might even be an Iranian version of Poland’s Lech Walesa who the U.S. could promote from among the people.

Success depends on U.S. sang froid, accurate intelligence insights, and political realism to address Iran as it is, rather than how we would like it to be. For the U.S., that means the correct message and tools for the appropriate elements of Iranian society, be it delivered by covert or overt means. And with that, the right mix of carrot and stick, and a consistent, predictable, and credible reliability to deliver either.

Douglas London retired from the CIA in 2019 after 34 years as a Senior Operations Officer. He teaches at Georgetown University, is a Non-resident fellow at the Middle East Institute, and is author of the book “The Recruiter,” concerning the CIA’s post 9/11 transformation. Follow him @DouglasLondon5. The views expressed in this piece are his own.