TurkStream 2 or Balkan Stream? Either way, Moscow is the main beneficiary 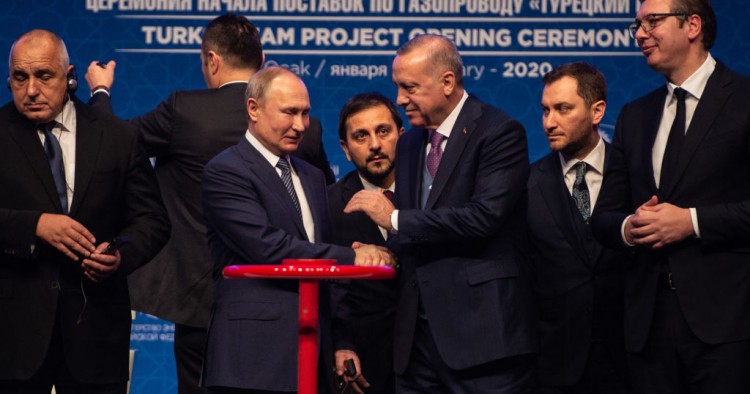 TurkStream, the much discussed gas pipeline across the Black Sea, is now a reality. In January, President Recep Tayyip Erdogan and President Vladimir Putin presided over the launch ceremony in Istanbul. Gas shipped over the so-called “Western route” is now pumped into the Turkish grid through TurkStream rather than via Ukraine, Romania, and Bulgaria as before.

But what of TurkStream 2, the pipeline’s extension into the Balkans? Once the subject of heated debate, it seems to have slipped out of minds courtesy of the political and economic stir caused by COVID-19. But just like NordStream 2 – the controversial pipeline connecting Russia with Germany – the prospect of Gazprom securing an export route through Southeast Europe does provoke consternation in Washington, D.C. Last July, the U.S. State Department updated its public guidance on Section 232 of the Countering America’s Adversaries Through Sanctions Act (CAATSA), opening the possibility to impose sanctions on firms and individuals involved in “the second line of TurkStream.”

America’s tough rhetoric does not preclude diplomatic and legal hairsplitting, however. According to the Bulgarian government, there is no such thing as TurkStream 2. Prime Minister Boyko Borisov has long insisted that the new transit infrastructure being built over the stretch from Bulgaria’s border with Turkey to Serbia is a self-standing project and should be known as “Balkan Stream.” In early August, he went a step further by claiming that what was underway amounted to an expansion and upgrade of the Bulgarian grid to enable the shipment of extra volumes of gas from Turkey to the Western Balkans and onwards to Central Europe. On paper, this endeavor is part and parcel of Sofia’s efforts to establish a Balkan Hub sourced with gas from a variety of suppliers, including Russia, Azerbaijan, a liquefied natural gas (LNG) terminal in Northern Greece, and indigenous offshore production in the Black Sea. Borisov pitched this argument to President Donald Trump during their meeting at the White House in November 2019. The “second line of TurkStream”, according to Borisov’s interpretation, refers to one of the two parallel pipes laid over the Black Sea seabed and terminating at Turkey’s border with the European Union (EU).

Facts on the ground paint a different picture. Even if Bulgartransgaz, Bulgaria’s state-owned grid operator, is the primary investor and retains ownership over the new East-West pipeline, Russia stands as the ultimate beneficiary. Gazprom has booked close to 90 percent of the throughput capacity over the next 20 years. It did so in a public tender where it faced no serious rival bidder. Critics furthermore point out that Balkan Stream/TurkStream 2 rests on no economic rationale other than the continuation of the already operational Russian-Turkish pipeline. Half of the latter’s capacity, 15.75 billion cubic meters (bcm), is reserved for the Turkish market. The other half, by its very design, is bound for the EU and the Western Balkan countries. Essentially, Bulgaria is investing in infrastructure on Russia’s behalf. It is also bearing the financial risk; Bulgartransgaz has taken loans meant to be repaid by the transit fees paid by Gazprom over two decades. Needless to say, future demand for natural gas and level of market prices are uncertain.

Russia seems to also have profited in business terms, not just geopolitically. Journalists in Bulgaria have dug deeper into the case of Arkad, the Saudi consortium in charge of Balkan Stream’s construction. Though it won the tender in 2019 (not without legal tussles), Arkad has subcontracted the work to four state-owned companies – three Russian and one Belarusian. In addition, the Russian outfit TMK, whose subsidiaries originally bid against the Saudis, had supplied the steel pipes before Bulgartrangaz and Bulgaria’s Ministry of Energy finalized the selection procedure. This suggests that Sofia and Moscow had struck a direct deal from the very start. In all likelihood, Saudi Arabia’s Arkad had no say on the matter. It’s worth also noting that billionaire owner and Chairman of TMK, Dmitry Pumpyansky, was blacklisted by the U.S. Treasury Department in April 2018.

In short, a good chunk of the $1.82 billion spent on Balkan Stream will be channeled to Russia. That is in addition to money generated in Serbia where Gazprom controls 51 percent of TurkStream 2/Balkan Stream and where IDC, a Russian engineering construction company is doing the building. In early February, Arkad subcontracted to IDC a 100 km section in western Bulgaria. The concession came after Putin himself castigated the government in Sofia for deliberately holding up work on the pipeline. Now Bulgaria is rushing to finish up by the end of 2020.

Dimitar Bechev is a non-resident scholar with MEI's Frontier Europe Initiative. He is also a senior fellow with the Atlantic Council’s Eurasia Center and a research fellow at the Center of Slavic, Eurasian, and East European Studies at the University of North Carolina. The views expressed in this piece are his own.