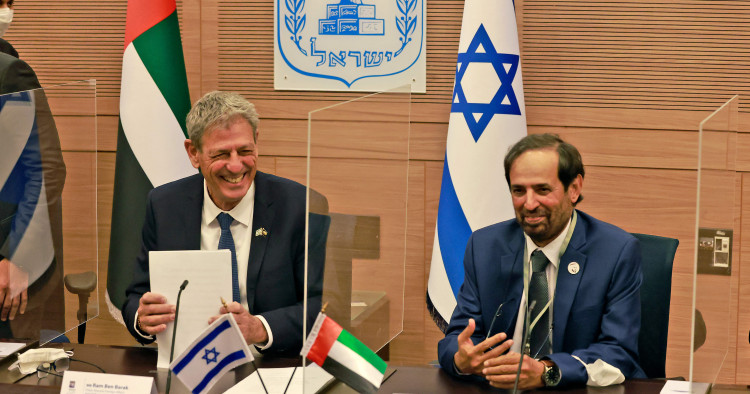 Two years after the Sept. 15, 2020, signing of the Abraham Accords, which normalized diplomatic relations among Israel, the United Arab Emirates, Bahrain, Morocco, and, potentially, Sudan, progress in developing relations has achieved mixed results. As anticipated, normalization has opened new opportunities for defense and security cooperation, especially among Israel, Bahrain, and the UAE, which share a common perspective on the security threat posed by Iran. The subsequent agreement to organize the Negev Forum, which also folded Egypt into the Abraham Accords coalition, offered additional possibilities for cooperation on shared interests, including energy, food and water security, health, and other issues.

But there are shortcomings in the level of cooperation as well. Most notably, despite the initial goal of the Arab organizers, cooperation among Israel and its Arab partners has failed to produce tangible improvements in the Israeli-Palestinian calculus. That may change, as the Negev Forum includes as an element of its agenda taking steps to improve living conditions for Palestinians. Moreover, the Israelis are now, arguably, more cautious about managing relations with the Palestinians to avoid conflict with their newfound Arab partners. But any real change for Palestinians has so far been nearly invisible, and the potential that the Nov. 1 elections in Israel will produce another swing to the hard right could make even a positive change in tone a relic of the past.

The scope of the Abraham Accords has also failed to bring in new members. Despite some softening in its position on bilateral relations, including in the area of defense cooperation and the opening of its airspace to Israeli aviation, Saudi Arabia has held firm in its commitment to the pre-existing Arab Peace Initiative (API). As Adel al-Jubeir, the Saudi minister of state for foreign affairs, elaborated over the summer, the API posits that “peace comes at the end of the process, not at the beginning.” Even those Gulf states like Oman and Qatar that have long maintained nearly de jure relations with Israel have thus far declined to follow the UAE and Bahrain into formalizing their ties.

From an Israeli perspective, incremental improvements in its links to the Arab Gulf states may be sufficient. Despite their expressed adherence to the API, the Saudis have been willing to take slow, small-scale normalization measures before there is a full resolution of the Israeli-Palestinian issue. As noted above, security cooperation in the Red Sea littoral is one area where the Saudis have demonstrated a willingness to work with Israel. And Saudi agreements permitting overflights of its airspace for Israeli civil aviation as well as accepting direct travel for Hajj pilgrims from Israel are additional indicators of a more relaxed Saudi position on cooperation with Israel. Israeli policymakers may also consider developing relations with Saudi Arabia outside of the Abraham Accords box.

Similarly, both Oman and Qatar have continued their long-standing practical engagement with Israel. Although Doha criticized the Abraham Accords and reiterated its support for the API, the Qatari government has maintained its under-the-radar “working relationship” with Israel. For its part, Oman has sustained warm, if quiet, relations with Israel for nearly 50 years, perhaps the oldest such relationship between Israel and a Gulf state. Today, it is most notably characterized by Israeli participation in the Muscat-based Middle East Desalination Research Center, the last of the Madrid Process initiatives still extant.

After two years, the participating governments continue to see the Abraham Accords positively as advancing their national interests; and normalization has opened the door to private-sector elements, especially in the UAE, that were well-positioned to take advantage of the resulting bilateral trade and commerce opportunities. But the Accords have yet to find a firm rooting in the attitudes of Arab populations. Except for Morocco, where recent Arab Barometer polling data found that only 11% of the population considers Israel a threat, Arab publics generally continue to view Israel in a negative light, based largely on the latter’s failure to resolve the Palestinian issue. This negative perspective undoubtedly makes decision-makers in other Arab capitals, especially Riyadh, reluctant to move forward on normalization. The risk, therefore, is that the absence of progress on the Palestinian front will ultimately lead to the Abraham Accords being perceived as another cold peace.

Amb. (ret.) Gerald Feierstein is a distinguished senior fellow on U.S. diplomacy at the Middle East Institute (MEI) and director of its Arabian Peninsula Affairs Program.

Dr. Yoel Guzansky is a Senior Research Fellow at the Institute for National Security Studies (INSS) and a Non-Resident Scholar at MEI, specializing in Gulf politics and security.