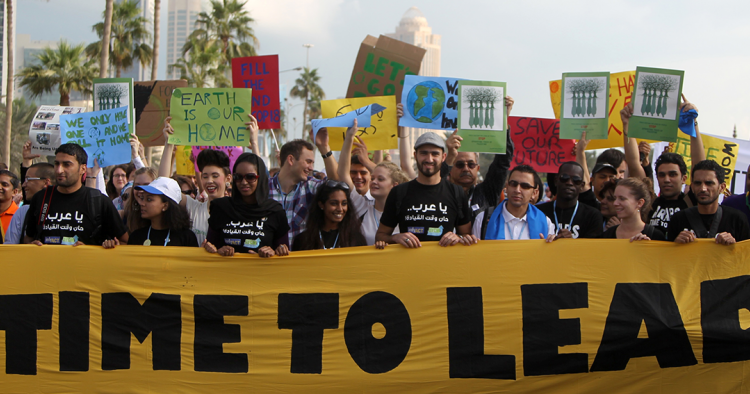 It’s worth considering how youth in the Arab region have fared and are expected to fare in terms of climate activism. While this has historically been excellent, there are some disparities masked by the glossy big picture in the global climate movement.

The Middle East and North Africa (MENA) is home to some of the hottest climates in the world and the region's high temperatures — in some countries exceeding 55° Celsius — make it particularly vulnerable to climate change-related extreme weather events. As climate change takes a heavy toll, the region’s young people are pushing for bolder action to address the problem. As the outcomes from the COP26 U.N. Climate Change Conference made clear though, leaders are not doing enough beyond offering empty words, and what was hoped to be “the most inclusive COP ever” instead ended up being the exact opposite. Historically youth from MENA are underrepresented with limited media visibility and many were unable to participate and contribute to the global climate conversation.

Young people (0-25) in the MENA region currently account for nearly half of the population and have the potential to become agents of change, contributing to a more prosperous and stable future for themselves and their communities. However, unleashing this potential requires urgent and significant support to create opportunities for meaningful learning, social engagement, and work — all of which are currently limited — at the local, regional, and global levels. Middle East youth want to build awareness of the truth about the climate crisis, as it seriously deserves, but it appears that political leaders are only now waking up to the reality of the situation. This does not mean that the Middle East youth climate movement has not been changed, or that it won’t.

The youth climate movement in the Middle East

In a region plagued by youth unemployment and conflicts, daily survival is more important to many young people than fighting climate change. Moreover, because quasi-state systems and semi-authoritarian governments are still prevalent in the MENA region, and public protests can be prohibited even if they’re peaceful, it is not surprising that there aren’t many climate protesters or marches in the streets like Fridays for Future or Extinction Rebellion, and media stories, coverage, and attention are limited. That does not mean that youth climate activism or a youth climate movement in the Middle East does not exist though. While street protests may not be their modus operandi, educational, awareness, policy, and lobbying activities are increasingly becoming essential tools for young Arabs to voice their concerns about climate issues and influence their governments and communities.

Today’s Arab youth are the first generation to come of age amid rapid climate change and they have the most at stake in how society responds to it. Climate change will bring economic and environmental challenges as well as opportunities. Young people in the Middle East are waking up to the existential threat the climate crisis poses and have significantly increased efforts to respond to it. However, the climate movement faces limitations in a region that is beset with numerous other crises, including wars, refugees, deadly sectarian divisions, economic stagnation, and authoritarianism. But despite these challenges, the actions of young people give hope that grassroots initiatives may galvanize actors to fight the problem of climate change in the MENA region.

COP18, where it all started

Qatar’s hosting of the annual conference to implement the U.N. Framework Convention on Climate Change (UNFCCC) in Doha in 2012, known as COP18, was a pivotal milestone as it was the first time that a U.N. climate meeting was held in a Middle Eastern country. It was also the first time that Arab youth turned out in full force to protest inaction on climate change by Arab and global leaders. In addition, Qatar saw what was probably its first public protest on Dec. 1, 2012, when 800 people attended a climate march through the busy streets of Doha. While this protest had support and was a state-orchestrated event, it was still a symbolic moment. The protest was notable for the presence of around 100 young activists from the Arab world, who came together and called for Arab heads of state to take the lead in climate talks. Thus, the climate movement in the Middle East started long before the Western movement, but their work was almost completely ignored by the Western media, which rarely recognizes progress outside of its own part of the world.

In the nine years since COP18, youth activists, researchers, and entrepreneurs in the Arab world have been playing an important role in designing and driving innovative bottom-up solutions to reduce the impact of climate change, raising awareness, and building resilience in their communities. This work has been instrumental in implementing climate change education, awareness, and action in the MENA countries — activities that are never in the headlines of global and regional media outlets. There is hope that the upcoming COP27 and COP28 meetings, which will be held in Egypt in November 2022 and the UAE in November 2023, respectively, will help highlight the issues as well as the exemplary work of the youth movement in the region. Moreover, these meetings could also change the perspective of how the youth movement in the Global South works and help create new avenues for partnership and close coordination in the global climate movement.

Civic engagement levels among youth in the MENA region are the lowest in the world, as there are limited opportunities for them to collaborate and develop a sense of shared responsibility and they have few platforms where they can innovate and work together. Regardless, over the years the youth movement in the region has made huge efforts when it comes to advocacy and activism, even though this has received little media attention.

Young people in the Middle East should therefore be given opportunities to take an active part in decision-making at the local, national, and global levels. Ultimately, we need to further identify opportunities, gaps, and challenges that youth climate actors in the Middle East region experience regarding disseminating knowledge, funding, and capacity building. It is essential to conduct major studies among youth regarding awareness of climate change as well as the role of youth in combating it.

The tendency of the media to present only the Global North climate movement is problematic, especially for those activists from the MENA region whose media invisibility leads to them not being noticed by organizations whose help they could greatly benefit from. Young people in the Global South have been tackling the climate crisis for years, and they should be celebrated too. While youth from the Middle East continue to work toward the common goal of fighting climate change and advocating climate justice issues ahead of COP27 in Egypt and COP28 in the UAE, Western and regional media must also highlight their contributions. That way, when future generations talk about the youth climate movement, it will not be the story of a single narrative and will make it clear that youth taking to the streets to protest climate change inaction is not the only way forward for climate activism. A collective and inclusive movement will help show how young climate leaders are an unstoppable force, equipped with the necessary policy knowledge and awareness that will help put forward their pressing climate priorities ahead of the COP summit as it returns to the Middle East.

Neeshad Shafi is an environmentalist, speaker, and policy-oriented social change advocate, best known for his work on environmental and climate change education, advocacy, and policy in the Gulf region. He is also a non-resident scholar with MEI’s Climate and Water Program. The views expressed in this piece are his own.