An unequal present and future in a COVID-19 world: The pandemic’s impact on refugee women in Lebanon 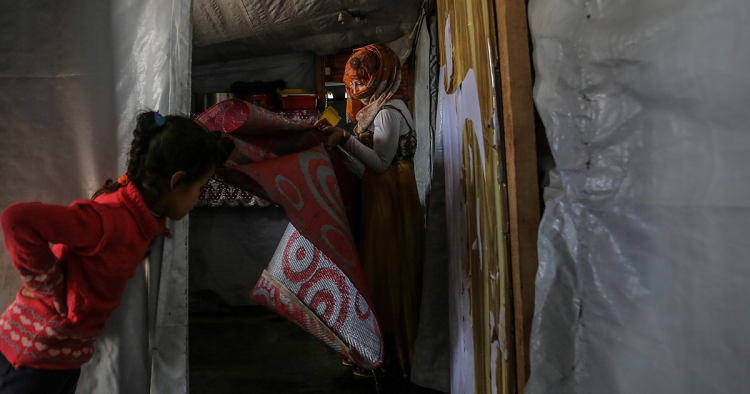 March 8 marks International Women’s Day and this year’s theme is “Women in Leadership: Achieving an Equal Future in a COVID-19 World.” However, refugee women and girls in Lebanon remain far behind the aspirations of the U.N.’s theme. This difficult situation is unlikely to change unless Lebanon ends its discriminatory policies toward refugees.

Lebanon has maintained a COVID-19 lockdown for nearly a year now. With the continuous renewed closures, refugees face increased risks not only from the spread of the virus but also from the lack of adequate health services in their fragile communities. According to the United Nations Relief and Works Agency (UNRWA), the mortality rate from COVID-19 among Palestinian refugees is three times that of the country’s general population, and among Syrian refugees it is likely even higher. The number of infections continues to rise, especially among children. Even before the most recent crises, Lebanon lacked a clear plan to reduce the risk of infection spreading in refugee camps. Once again, refugee and displaced women and girls will bear the heaviest burden of the pandemic and the lockdown.

In mid-February, Lebanon received the first batch of the two-dose COVID-19 vaccine. With $34 million in World Bank funding, the Lebanese Ministry of Health committed to vaccinate everyone in the country, including Syrian and Palestinian refugees. Because of its endemic corruption, Lebanon signed an agreement with the International Federation of the Red Cross and Red Crescent Societies to monitor the vaccination process and to ensure fair and equitable access for all. Yet politicians and their families were still able to bypass the process and receive the first round of vaccinations. Meanwhile, some right-wing politicians have insisted that only Lebanese citizens should receive the vaccine. In addition, the planned number of doses is only sufficient to vaccinate 2 million people out of the total population of 6.5 million, including around 1.5 million Syrian refugees and roughly 300,000 Palestinian refugees. As a result, the Lebanese-Palestinian Dialogue Committee and UNRWA recently requested that the Lebanese Ministry of Health import an additional 300,000 doses for Palestinian refugees. So far, however, funding for only 35,000 doses has been secured.

Even after the pandemic is over, COVID-19 will have a disproportionate impact on refugee women in Lebanon. According to a report from the U.N. Economic Commission for Western Asia (ESCWA), negative repercussions for refugee and displaced women go far beyond just the risk of infection, including increased violence, exploitation, and sexual abuse. This is compounded by poor living conditions, including overcrowded camps, poor infrastructure, and a lack of water, sanitation, and sexual and reproductive health care services.

A difficult situation made worse

Although refugee women already suffer from a lack of basic rights and patriarchal relations within families as well as within camps, the lockdown has made things much worse. They live in small dwellings in crowded camps, with no outdoor spaces, and often with large, multi-generational families. Homes that should be safe spaces for women and girls have instead become violent environments.

This was confirmed in a report by the Najdeh Association, a Palestinian non-governmental organization (NGO). Based on a study conducted in seven Palestinian refugee camps in Lebanon, the report found that there has been a large increase in the physical, verbal, sexual, emotional, and financial violence due to the pandemic and lockdown. It also revealed that young girls have been forced into early marriages. Roughly 89% of Palestinian refugee women surveyed experienced domestic violence from a male family member. In addition, 58% were subjected to verbal violence and 40% reported physical violence. Finally, 15% experienced financial violence and 5% were victims of sexual violence. The pandemic has also had repercussions on informal labor performed by refugee women. Many lost jobs that don’t provide health care or social protections but were a vital source of income for their families.

The problems facing women refugees in Lebanon cannot be separated from the broader condition of refugees — and the discrimination against them. Lebanon does not have an official, legal description or definition for refugees in general or for Palestinian refugees who have been living in the country for over seven decades. In practice, the latter have been treated as “refugees,” or “foreigners,” or as persons who do not hold the nationality of a recognized state. Similarly, Lebanon considers Syrian refugees to be “temporarily displaced persons” to avoid its obligations under international law if they were officially recognized as refugees. UNHCR, however, identifies them as such. As Lebanon is not a party to the 1951 Refugee Convention and does not provide support to refugees, foreigners, or displaced persons, there are very few legal protections for individuals in these categories.

Gender-based violence has long been a threat to women and girls, particularly refugees, the internally displaced, and asylum-seekers. Women are affected differently than men by crises and conflict, and refugee women and girls face a greater risk of domestic and other forms of violence. For refugee women, judicial interventions to solve gender-based violence are not always a first choice. Leaving the cycle of violence is very difficult because of the societal framework that governs their lives. Typically, there is an intervention by respected members of the community or a popular committee to resolve the issue. Although these community structures work on reconciliation with battered women, they also return them to the cycle of permanent violence. Some married women have used the Lebanese court system to resolve issues of domestic violence, but lost custody of their children as a result.

The pandemic has also impeded women's access to assistance and protection. The lockdown weakened the structures, legal mechanisms, and judicial protection systems that ensure women access to social justice. The closure of Lebanese government offices concerned with legal follow-up in cases of violence exacerbated the crisis of battered women. It also paralyzed domestic violence shelters as they were unable to receive new cases. The pandemic thus contributed to the loss of essential support structures for women and girls.

As the impact of the pandemic and ongoing financial crisis have made clear, Lebanon can no longer ignore its obligations under international law. The government must make greater efforts to ensure that refugee women and girls have access to legal aid as well as to health care services and sexual and reproductive rights. Lebanon must implement the Convention on the Elimination of All Forms of Discrimination against Women (CEDAW), including for refugee women. At the same time, U.N. agencies and NGOs must conduct the appropriate due diligence to protect women and girls that receive assistance from all forms of violence and exploitation. In addition, programs and services around gender-based violence should be expanded to account for greater need due to the pandemic. Otherwise, International Women’s Day will be just another day for women who are suffering from poverty, injustice, and violence.