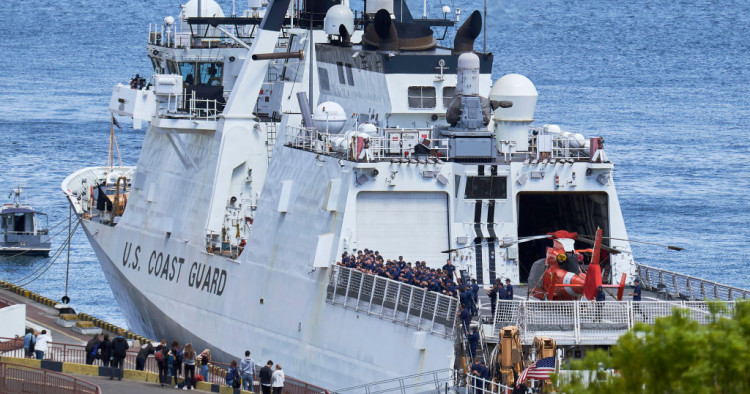 The USCGC Hamilton recently completed a visit around the Black Sea. This visit was notable for a couple of reasons. First, this was the first time the United States Coast Guard has operated in the Black Sea since 2008 when Russia invaded Georgia. Second, this U.S. deployment to the Black Sea came on the heels of a sizable Russian military buildup in the region.

Russia deployed tens of thousands of troops along its border with Ukraine during this recent military buildup. These military deployments were spontaneous and unrelated to any scheduled training exercises. Unlike major U.S. and NATO training exercises in Europe, Russia gave no prior notification to the Organization for Security Cooperation in Europe. Unsurprisingly, Russia’s actions were watched with alarm across Europe.

Most of the attention on the Russian military buildup was on the dozens of social media videos showing Russian tanks and armored vehicles traveling toward Ukraine. However, Russia's activity was not limited to land. There was also a Russian buildup at sea. Recently, four Russian warships from the Baltic fleet have moved to the Black Sea. In addition, 15 vessels from the Caspian flotilla have relocated to the Sea of Azov via the Volga-Don Canal. This brings a total of at least 50 Russian warships now operating in the waters around Ukraine.

For the U.S. and NATO, what Russia does in the Black Sea matters. The Black Sea sits at an important crossroads between Europe, Asia, and the Caucasus. Many important oil and gas pipelines, as well as fiber optic cables, crisscross the sea. Throughout the history of the region, the Black Sea has proven to be geopolitically and economically important.

In recent years, both Ukraine and Georgia have experienced direct Russian military aggression and occupation on their territory. In 2008, Russia invaded Georgia and continues to occupy 20 percent of that country, including the region of Abkhazia along the Black Sea. During the conflict in 2008, Russia destroyed the Georgian Navy. In recent years, Georgia has focused resources on building an effective Coast Guard force instead of a Navy. Russia is acutely aware of Abkhazia’s strategic importance along the Black Sea. Not only does Abkhazia contain hundreds of miles of coastline, but Moscow also maintains a large military presence there, estimated to be around 4,000 troops.

Russia’s annexation of Crimea in 2014 was an unprecedented act of foreign-state aggression in the 21st century. It was the first time that borders in Europe had been changed using military force since 1945. The annexation has de facto cut Ukraine’s coastline in half and has helped Moscow with its long-term goal of turning the Black Sea into a Russian-controlled lake. Russia has since claimed rights to underwater resources off the Crimean Peninsula previously belonging to Ukraine. Russia has also taken steps to strengthen its grip on Crimea through a major effort at increasing capabilities, especially anti-access and area-denial (A2/AD) capabilities.

The Alliance is expected focus on the Black Sea at the upcoming NATO summit in June. As the Alliance develops its Black Sea strategy focusing on NATO members Romania, Bulgaria, and Turkey, it should not forget the importance of Georgia and Ukraine.

The number of days spent by the U.S. Navy in the Black Sea has steadily declined since a peak in 2014 after Russia's annexation of Crimea. It is time to increase U.S. and NATO presence in the Black Sea using 2014 as a baseline. It is vitally important that when the U.S. Navy does enter the Black Sea, it calls into at least one port in either Georgia or Ukraine. A visit to both would be preferable. The U.S. should also explore opportunities to increase the number of cadets from Ukraine and Georgia that attend the U.S. Naval Academy and the U.S. Coast Guard Academy to help build the future leadership in their respective navies. The same could be done for other professional military schools within the U.S. Armed Forces.

A strong Ukrainian Navy and a capable Georgian Coast Guard is in America’s interest. After years of delay, the U.S. finally transferred two Island-class former Coast Guard ships to Ukraine. Three more Island-class ships for Ukraine is planned. This is a good first step in rebuilding Ukrainian maritime capability. The U.S. should accelerate providing inactivated warships, such as recently retired Cyclone Class patrol ships through the Excess Defense Articles program. While Georgia's maritime aspirations remain limited, the U.S. should work closely with Tbilisi to find areas of cooperation regarding maritime security issues. After Russia's invasion of Georgia in 2008, the Georgian Navy was all but destroyed. The U.S. should consider Georgia as a possible recipient of former U.S. Navy and Coast Guard ships leaving service.

The U.S. should also help both countries with their maritime defensive capabilities. For example, the U.S. can help fund and speed up research to get Ukraine’s domestically produced Neptune anti-ship missile in operation faster. In addition, the U.S. should consider appropriate off-the-shelf options for anti-ship missile platforms for Ukraine. The U.S. should also help to improve Ukraine and Georgia’s maritime security by providing improved radar and appropriate surveillance capabilities, such as unmanned aerial vehicles.

Perhaps most importantly, the U.S. must make sure that NATO’s door remains open for Georgia and Ukraine. These are two Black Sea countries that know what it is like to suffer from Russian aggression. They also aspire to join the Alliance someday. As long as they aspire to join the Alliance, the U.S. should help them along the way. No non-NATO country, such as Russia, should have a veto on their future potential membership.

Any proposals to increase U.S. and NATO presence in the Black Sea should include the involvement and consultation with Turkey. Turkey is a NATO member with sovereign control of the straits entering the Black Sea. Turkey also has very good relations with both Ukraine and Georgia. Turkey has been a vocal supporter of Ukraine’s territorial integrity and has done a considerable amount of work to raise the plight of the Crimean Tartars on the international stage. Crucially, Turkey and Ukraine recently agreed to a multimillion-dollar defense deal that, among other things, will result in Ukraine receiving very effective and battle proven Unmanned Ariel Vehicles from Turkey.

As for Georgia, Turkey is one of Tbilisi’s strongest supporters of membership into NATO. The two countries share a land border and enjoy close economic relations. This is particularly true in the energy sphere where the oil and gas traveling from the Caspian Sea to Turkey transits through Georgia.

The operation of the USCGC Hamilton in the Black Sea, and her visit to both Georgia and Ukraine, served as a reminder that the U.S. has an interest to help build the capacity and capabilities of partners in the Black Sea. While Georgia and Ukraine are not formally in NATO, both contribute greatly to regional stability and serve as a key piece of the regional security puzzle.

Therefore, it is in America and NATO's interest to engage with both countries and help them develop and maintain a robust maritime capability. No Black Sea Strategy can work without them.