As violence flares up in Daraa, control can be an illusion 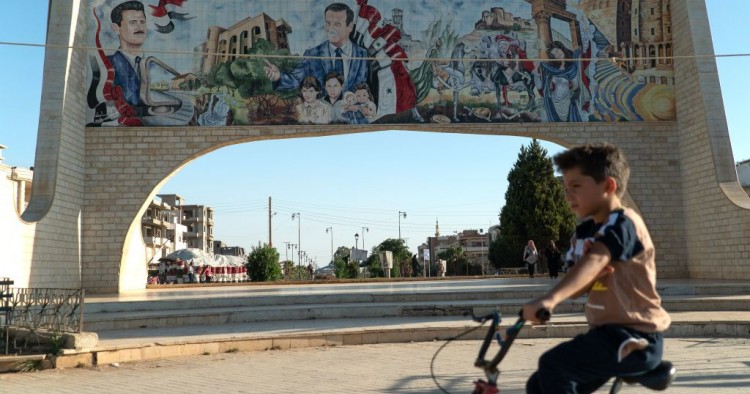 Violence has been flaring up at an alarming rate in the southern Syrian province of Daraa, amid dozens of unclaimed attacks by gunmen. Over the last three months, assassinations, checkpoint attacks, fires, and sporadic clashes have wreaked havoc in the area and signaled a potential return of conflict.

A year ago, in July 2018, the strategic province was recaptured by the Syrian army after a lightning-quick offensive brought the whole of southern Syria officially under government control. This was not entirely due to military means, however, as many of the major towns and cities across the province entered into reconciliation deals brokered by Russia.

According to the agreement, government security forces were not allowed to enter “reconciliation” areas; Daraa was under state control in name only. As such, many of the towns and cities now witnessing an upsurge in violence never really changed hands. Most areas remained effectively under opposition control — the only difference was that the official Syrian flag was raised and administrative buildings came back into service.

Between the Idlib offensive and the increased focus on northern Syria, Daraa has gone under the radar; however, hit-and-run strikes on government checkpoints, assassinations, and a general sense of lawlessness have created something of a predicament for Damascus, and the list of attacks grows longer by the day. On June 10th one soldier from the 4th Armored Division was killed and two were wounded when gunmen opened fire on a checkpoint at al-Ouja near the Zizun military camp in the Daraa countryside. That same month, Khaled al-Latifiya — a former rebel commander and chief supporter of the reconciliation agreement in the town of Nawa in western Daraa — was assassinated by “unidentified assailants.” Days later in Nawa, an attack on the local councilor Mohammad Sa’id Asawdeh at his house saw him barely escape alive after sustaining several gunshot wounds.

The killings are not believed to be entirely politically motivated, as some may be related to personal and local issues, yet the violence is growing at an alarming rate. On June 23rd, a group of 10 gunmen riding motorcycles attacked checkpoints around the town of Nawa with automatic rifles, leading to a 15-minute clash with local police. On June 24th, Mohamad Rashrash was killed in the town of Jasem after a suspected local feud, while in the governorate of Herak in east Daraa a government building was blown up, and the local police station was attacked by militants.

The violence in June is a continuation of a trend seen the previous month. In May, a security officer for 15th Division Brigadier General Jamal Ahmad was assassinated in Daraa. Before that, two gunmen riding on a motorcycle attacked a government checkpoint with a grenade and small arms near Sheikh Miskeen. Similar attacks and assassinations were reported in the towns of Dael, Jalin, Sanamen, Tafas, and Tel-Shihab to name but a few.

The gradual return of small-scale guerrilla fighting in Daraa poses many problems for Damascus. First, this seems to be the largest case thus far of violence occurring in reconciliation areas recovered by the Syrian government, with some local sources suggesting that at least 30 confirmed attacks have taken place in the last three months alone. This has raised some alarm bells within pro-government circles. Activist Yaha Kousa noted that Idlib isn’t the only province generating concern for Damascus at the moment: “The situation in Idlib is not the only subject on people’s minds. There is talk behind closed doors that the situation in Daraa is not good at all. Security incidents, military positions getting targeted, assassinations, and kidnapping among other infractions are threatening the security of the state in the province.” So far, Damascus’ attempts to address the situation have been limited, although not entirely absent. On May 23rd, a special amnesty was granted in Daraa, leading to the release of 15 detainees and the exemption of 1090 men from military service.

However, as state control remains weak, crime and petty theft have increased — civilian Tariq Ziad Hariri was beaten nearly to death by a group of thieves who forcibly entered his house in the al-Seil district in central Daraa, looting it and stealing his gold and valuables. The culprits were never found. The attack and robbery prompted Daraa-based pro-government reporter Firas al-Ahmad to post on social media, “How can this be, people’s homes being robbed in broad daylight, no word on culprits, no explanations, and no police force to hunt these people down?” Daraa also has not been exempt from the new phenomenon of crop fires with a large section of agricultural land southeast of the city destroyed in late May.

Areas of Daraa have considerable autonomy and this will continue to create tensions in the province. Yet, ultimately, the question remains: To what extent will security forces and government entities allow this autonomy to continue? And how long will it be before there is some sort of re-negotiation or an attempt to project the state’s power and sovereignty onto areas that are “with” the government in name, but technically just outside its jurisdiction?

Aymenn al-Tamimi, an independent analyst who maintains close contacts in Quneitra and Daraa provinces, predicts that the Syrian government may take more action to exert control in Daraa. “The government will try to use regular forces to impose control at the expense of the influence of some auxiliary groups that were formed out of former rebel factions. For instance, in the town of Tafas, it’s entirely 5th Corps formed out of the former rebel group Jaysh al-Mu’atazz bi-Allah,” he said. Tamimi viewed the escalation in Daraa as a culmination of many factors, including a “combination of general lawlessness and very small pockets of insurgency in certain areas, such as al-Sanamayn and Da’el.”

Although there is little desire to see outright conflict break out in Daraa, the rising violence poses a new challenge and raises significant questions about its future. Speaking about the latest cycle of violence, Ruwan al-Rejoleh, CEO of a Syria-focused consultancy based in Washington, said, “It is unlikely to see those areas turning into fully opposition-held again. There are elements of insurgency remaining in those areas, however, and on a regional and international level, there is no intention at all to re-open the south front again.” Rejoleh continued, “What we are seeing in terms of violence is expected because of two reasons: First, the reconciliation agreements were breached by the regime and locals felt again betrayed, especially by being drafted back to 5th Corps and other pro-regime forces. Additionally, those areas are still considered conflict areas and the economy there hasn’t actually transferred to ‘post-conflict’ stage. The southern front needs a collection of tools to be stabilized again over a course of time with serious efforts from regional and international players.”

Daraa is both strategically and symbolically important. It is close to the main crossings on the Jordanian border, but it is also where the Syrian uprising began in March 2011. Retaking it had special significance for the government, and a potential re-ignition of violence and other problems there would have serious consequences.

Anti-government sentiment in Daraa flared up back in March as well, when dozens of demonstrations took place across the countryside to protest the erection of a statue of Hafez al-Assad, late father of the president. The protests were in areas without a Syrian security force presence. Reprisals have been an issue as well: Human Rights Watch has documented 11 cases of detention or harassment in areas taken back in the province. Such cases are likely to increase in number as unclaimed attacks continue.

According to Hadeel Oueis, a geopolitical analyst covering Syria, there was a sense of unavoidability about the return to violence. “Escalation was [an] inevitability since the province fell and the attacks and street-fighting are something expected to occur, especially in areas taken back — at least officially — from the opposition,” he said. Oueis argues that “the opposition was unable to economically secure a good standard of life for the population, which allowed the regime back. But for many militants in Daraa and across Syria, fighting has become a profession with an income, and as the wheel of economic life has stopped, it is likely a return to fighting will happen in some way.”

The state of post-conflict Daraa is slowly regressing and the province seems to be on a collision course. The Syrian government is finding out the hard way that ruling large swathes of territory that were previously held by the opposition is a difficult task — and one that could prove dangerous if not handled carefully.

Danny Makki is a journalist covering the Syrian conflict. He has an M.A. in Middle East politics from SOAS University, and specializes in Syrian relations with Russia and Iran. The views expressed in this article are his own.