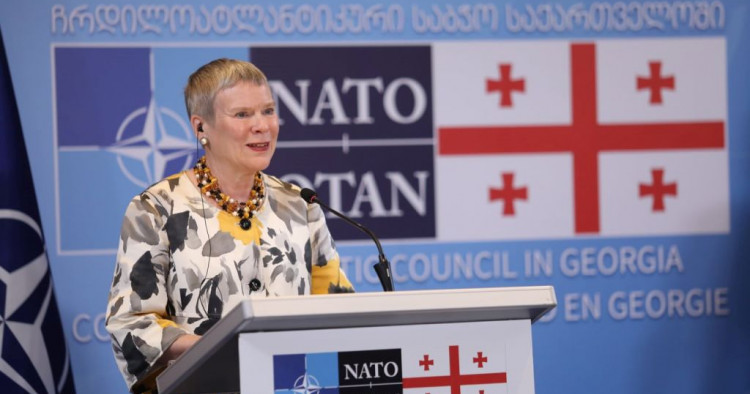 It has been more than a decade since Georgia was promised eventual membership in the North Atlantic Treaty Organization (NATO) at the 2008 Bucharest Summit. At the time, NATO did not act decisively on granting Georgia a Membership Action Plan (MAP). A few months after the Summit, Russia invaded Georgia and continues to occupy Abkhazia and the Tskhinvali region (more commonly known as South Ossetia). After years of economic, governance, and military reforms, this partial occupation remains the primary roadblock to meaningful progress on Georgia’s NATO aspirations. Other NATO members do not want to risk a confrontation with Russia by inviting Georgia to join the Alliance.

Russia has perfected a formula to block the Euro-Atlantic aspirations of its neighbors: invasion and partial occupation. Moscow applied this formula to Georgia in 2008 and Ukraine in 2014 on the eve of that country signing an Association Agreement with the European Union (EU). Moldova shares a similar situation over Transnistria.

Although NATO leaders repeatedly state that the door is open for new members, in recent years Georgia's progress toward membership has plateaued. The latest NATO summit in Brussels was a great illustration of this point. The summit communique contained the same old and stale wording found in past communiques about Georgia's aspirations to join the Alliance. As with previous summits, there was a debate about whether to give Georgia a MAP. As with previous summits, the answer was no.

Sadly, the issue of Russia's occupation of 20 percent of Georgia's internationally recognized territory has all but fallen off the international agenda. During the meeting between President Joe Biden and President Vladimir Putin in Geneva, the topic of Georgia was not discussed between the two leaders. And when each leader held their own press conference, the word Georgia was not mentioned once.

Frankly speaking, there is a lack of vision, creativity, and leadership to get Georgia into the Alliance. In order to change this situation, and inject new enthusiasm in Georgia's NATO aspirations, NATO and its leaders must do two things. First, it is time to change the debate about Georgia and MAP. Second, consider amending Article 6 of the North Atlantic Treaty as a way to get Georgia into the Alliance. This article will examine these two points in turn.

MAP is a NATO program that offers assistance and practical support to the individual needs of countries wishing to join. At every NATO summit since 2008, Georgia had hoped to receive a MAP but did not. As the most recent summit declaration states: “We reiterate the decision made at the 2008 Bucharest Summit that Georgia will become a member of the Alliance, with the MAP as an integral part of the process; we reaffirm all elements of that decision, as well as subsequent decisions.”  It should be stressed that the declaration states that MAP is an integral part - not the integral part - of the membership process.

The MAP process worked well 15 to 20 years ago when the question of NATO enlargement centered on relatively straightforward cases of Central and Eastern European nations that did not have a partial Russian occupation on their territory. Thirteen years after the Bucharest Summit, it is clear that the MAP is not helping to create a realistic, reasonable, and responsible pathway for Georgia’s NATO membership.

What started out as a technical way to bring an aspirant country into the Alliance is now, in the case of Georgia, used as a technicality to stop enlargement. Some countries hide behind the more than a decades old MAP language in each summit declaration as a reason not to move forward with Georgia’s membership aspirations. There is no requirement for a candidate country to either receive or complete a MAP before joining the Alliance. The MAP process was created in 1999, and there is no mention of MAP in Article 10 of the 1949 North Atlantic Treaty. The majority of NATO’s members never completed a MAP.

When a MAP is granted to an aspirant country, this marks the start, and not the end, of the membership process. As NATO states: “Participation in the MAP does not prejudge any decision by the Alliance on future membership.” Due to a name dispute with Greece, North Macedonia’s MAP process lasted 11 years. Bosnia has had a MAP since 2010 with no prospect of membership in sight. Therefore, there is no good reason to continue denying Georgia a MAP.

NATO’s leaders should consider amending Article 6 the 1949 North Atlantic Treaty to get Georgia into NATO. This proposal is not as radical as it might first seem. Under this scenario, all of Georgia’s internationally recognized territory, including the Russian-occupied regions of Abkhazia and Tskhinvali, could be invited to join NATO. However, only the areas outside the two occupied regions would get NATO’s Article 5 security guarantee -”for now.

To make this work, NATO would amend Article 6 of the 1949 North Atlantic Treaty, which defines where Article 5 applies, to exclude - only temporarily - the Abkhazia and Tskhinvali regions. This amendment to the treaty can be made during Georgia’s accession-protocol process. However, it should be made clear that amending Article 6 in this way would only be a temporary measure, expiring when Georgia’s full and internationally recognized territory is restored by peaceful means.

There are several reasons why this strategy could be successful. First, this plan is consistent with Georgia’s non-use-of-force pledge for regaining control of the occupied regions. As the Georgian government has already pledged not to use force to regain its occupied regions, an Article 5 security guarantee is unnecessary.

Second, there is a precedent of amending or modifying Article 6 in the North Atlantic Treaty. In 1951, just two years after NATO’s formation, the article was amended just before Greece and Turkey joined the Alliance. In 1963, the meaning of Article 6 was modified when the North Atlantic Council acknowledged that the article no longer applied to the Algerian Departments of France due to Algeria’s independence. The council decided to keep the wording of the article but stripped the phrase Algerian Departments of France of its legal impact.

Third, several other NATO members do not have all their territory under the protection of Article 5. Examples include the United States with its territory of Guam or the state of Hawaii in the Pacific, the United Kingdom with the Falkland Islands in the south Atlantic, and France with Reunion Island in the Indian Ocean.

Admittedly, amending Article 6 is not without challenges - or even controversy. For it to work, real political leadership is needed in Washington, Brussels, and Tbilisi. The United States will need to convince Europeans that this proposal successfully heads off an automatic war with Russia. The Georgian government will need to explain to its people that it is not abandoning the two occupied regions or the non-use-of-force pledge.

Russia will spin this idea as a choice between Georgians joining NATO and giving up on the two occupied regions. This is a false dichotomy. NATO should never suggest that the Georgian people give up on their territorial integrity in exchange for NATO membership. Thankfully, this is neither what NATO is asking nor what this article is proposing.

Right now, Russia knows that all it must do to prevent a country from ever joining NATO is to invade and then partially occupy it. Temporarily amending Article 6 would deny Moscow this veto, starting with Georgia.

In the meantime, the Alliance needs to change the terms of the MAP debate as it pertains to Georgia. At the next NATO summit next year in Spain, NATO should omit the phrase “with MAP as an integral part of the process” from the section about Georgia in the text of its communique. This would allow the Alliance to have a real debate about the applicability and role of MAP for Tbilisi.

Georgia cannot join NATO because the Kremlin wants to keep Georgia out of the Alliance more than the Alliance wants Georgia in. NATO and Georgian policymakers can either get creative to chart out a realistic and reasonable path to get Georgia into NATO, or they can continue to allow Russia to veto NATO enlargement. The only question is whether leaders on both sides of the Atlantic have the required creativity and political will to do so.