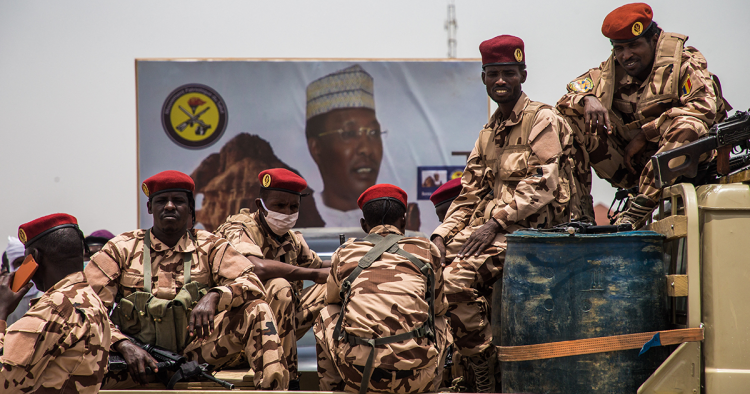 On April 20, Chadian President Idriss Déby was killed by Front for Change and Concord in Chad (FACT) rebels in the country’s northwestern Tibesti region. The sudden death of Déby, who seized power in Chad via a military coup in December 1990 and was re-elected on April 11 with 79.3% of the vote, risks plunging Chad into a state of prolonged instability. FACT rebels view Chad’s new Transitional Military Council, which is headed by Idriss Déby’s son Mahamat Idriss Déby Itno, as an illegitimate entity and plan to march on Chad’s capital N’Djamena.

Chad’s state of instability has alarmed France and the African Union, which are on the frontlines of the counterterrorism struggle in the Sahel, but it also threatens the geopolitical interests of Middle Eastern regional powers. Chad is a flashpoint in the Egypt-Turkey struggle for influence in Africa, and also possesses a robust partnership with the UAE and growing relations with Israel. Chad’s expanded economic, diplomatic, and security integration with the Middle East and North Africa (MENA) region will persist after Déby’s death and could strengthen the transitional government’s hold on power.

The intensifying Turkey-Egypt rivalry in Chad

Although Turkish influence in Africa markedly expanded after Recep Tayyip Erdoğan’s 2005 continental tour, the Turkey-Chad partnership formed during the Cold War. Turkey and Chad’s shared aversion to communism created bonds between the two countries. However, Turkey’s cordial relations with Libya, which began with Moammar Gadhafi’s supply of spare parts to the Turkish military during its 1974 invasion of Cyprus, explained its non-aligned stance during the 1978-87 Chad-Libya War. Chad relied on assistance from Arab countries, such as Egypt and Iraq, during this conflict. However, Turkey established cordial relations with Idriss Déby’s regime by supplying humanitarian aid to Chad during the early 1990s drought.

After a quarter-century of relative dormancy, Erdoğan’s historic December 2017 visit to N’Djamena took Turkey-Chad relations to new heights. During this trip, Erdoğan encouraged Turkish companies to invest in Chad’s economy and emphasized that Turkey was seeking win-win cooperation with Chad, which contrasted with the ambitions of Western colonial powers. Turkey viewed Chad’s gold reserves and agricultural markets as especially appealing investment destinations but its landlocked location and poor infrastructure created complications for would-be Turkish entrepreneurs. Turkey views Chad as a long-term economic partner in West Africa rather than a source of fast revenue, and Ankara highlighted its commitment to N’Djamena by supplying two tranches of COVID-19 medical assistance last year on May 22 and June 18.

Since 2019, Egypt has viewed the Turkey-Chad partnership with trepidation. Egyptian officials fear that Turkey could leverage Chad’s proximity to Darfur and Libya to threaten Egypt’s security. Concerns also persist in Egypt and the UAE about FACT’s links to Turkish-aligned militias in Misrata, Libya. The recent de-escalation of tensions between Egypt and Turkey might ease these mistrusts, but Egypt still views Chad, along with Senegal, as a major theater of competition with Turkey in West Africa.

In October 2019, Egyptian President Abdel-Fattah el-Sisi met Idriss Déby on the sidelines of the Russia-Africa Summit in Sochi and discussed the need to promote “African solutions to African crises.” Idriss Déby’s opposition to Turkey’s January 2020 military intervention in Libya facilitated closer Egypt-Chad cooperation. The head of Egypt’s General Intelligence Service Abbas Kamel regularly engages with Chadian officials on counterterrorism in northwestern Africa. Egypt also wants to create road links with Libya and Chad that would facilitate regional economic integration. This project is imperiled by instability in Chad and therefore, Egypt is earnestly watching what unfolds in the post-Déby era.

Chad’s burgeoning partnerships with the UAE and Israel

To complement its historic partnerships with Turkey and Egypt, Chad has established a robust partnership with the UAE and repaired its historically tense relationship with Israel. From 2015 to 2019, Chad-UAE bilateral trade links expanded from $177 million to $412 million. This figure dwarfs Turkey’s $72.4 million in trade with Chad in 2019. In September 2017, the UAE Minister of Economy Sultan bin Saeed al-Mansouri addressed the UAE-Chad Business Forum in Abu Dhabi and singled out Chad as a target country for UAE investments in Africa.

Chad’s military support for Libya National Army (LNA) chieftain Khalifa Hifter also strengthened its partnership with the UAE. In December 2019, the UAE recruited 200 fighters associated with the Chadian Rotation and Reconciliation Movement, and in June 2020, Chad reportedly authorized the deployment of an additional 1,500 troops to fight for the LNA. Chadian forces in Libya hail from a diverse array of ideological backgrounds, as FACT also has a non-aggression pact with Hifter. An escalation of political violence in Chad could cause these troops to return home or create discord within the ranks of Chadian mercenaries in Libya. This might weaken the foundations of the UAE’s leverage in eastern Libya.

Although Chad and Israel had no diplomatic relations from 1972 to 2019, relations between the two countries improved during Idriss Déby’s last two years in office. This thaw was reflected in Israeli Prime Minister Benjamin Netanyahu’s praise for Idriss Déby’s “bold leadership.” During his January 2019 visit to N’Djamena, Netanyahu described Chad as a partner and struck a series of commercial deals with Déby. In August 2019, a delegation of Israeli government officials travelled to Chad to talk about agricultural and mining cooperation. Chad and Israel also discussed the exchange of ambassadors in a September 2020 meeting in Jerusalem. While Mahamat Déby will likely continue his father’s engagement with Israel, Chadian civil society espouses anti-Israeli sentiments. Therefore, Israel will seek to preserve the political status quo in Chad and likely does not see FACT gains or a democratic transition as desirable.

After Déby’s assassination, officials across the MENA region set aside their differences and presented a united voice of solidarity with Chad. This suggests that MENA countries will rally around Mahamat Déby’s leadership and refrain from the proxy rivalries that have subsumed other African states, such as Sudan and Somalia. The MENA region’s united support for “authoritarian stability” in Chad dovetails with the views of France, Russia, and China, and could thwart faint hopes for a democratic transition resulting from Déby’s unexpected demise.