What does Trump’s Golan proclamation mean for UNDOF? 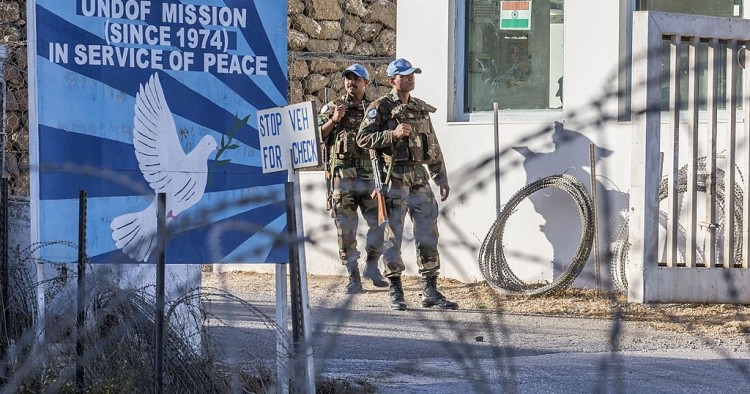 Sometime in June the UN Security Council will vote to approve another six-month renewal of the mandate of the 1000-strong UN Disengagement Observer Force (UNDOF) deployed in the Golan Heights.

For more than four decades, the UN Security Council has unanimously renewed the mission’s mandate to maintain the ceasefire between Israel and Syria, to supervise the disengagement of opposing forces, and to monitor adherence to the areas of separation and limitation of forces agreed upon in the U.S.-mediated 1974 Disengagement Agreement.

In a region famously fractured and endemically unstable, UNDOF, and the international consensus supporting it, stand out as a resilient example of the enduring value of internationally sanctioned understandings aimed at defusing conflict.

The border region remains unstable. In recent months Syria and Israel have fired across the ceasefire line and violated agreements regulating the force limitation zones. UNDOF is only now reconstituting itself along the ceasefire line that runs from Jebel as Sheikh in the north to the Jordanian border. It is reopening closed checkpoints, restoring patrols, and rebuilding observation posts on the Syrian (Bravo) side of the frontier abandoned after Damascus lost control of the area to opposition forces during the civil war.

Notwithstanding tremendous animosity and lack of trust, Israel and Syria remain committed to the force’s ability to both rebuild and to restore a system that has proven itself over many decades.

Having survived the challenges posed by the civil war, UNDOF, and more broadly the structure of relations between Israel and Syria, now face a challenge of a different sort. On March 25, President Donald Trump signed a proclamation recognizing Israeli sovereignty over the area of the Golan Heights west of the Alfa (Israeli) line.

The U.S. move changes everything. It removes the United States from an international consensus that Washington itself once led and that put an end to the October 1973 war, established a ceasefire that still holds, and enabled UNDOF’s establishment one year later.

Trump’s decision to recognize Israel’s annexation of Syrian territory repudiates these conventions. Almost as an afterthought, nearly two months after the proclamation, Secretary of State Mike Pompeo offered a pale defense of the decision as consistent with UN Security Council Resolution (UNSCR) 242. There is an international audience of one — Israel — that stands prepared to endorse this spurious and ill-constructed claim.

The U.S. decision stands as an act of unilateralism that flies in the face of the internationally recognized terms for the resolution of Israeli and Syrian claims set out in UNSCR 242 and reaffirmed in UNSCR 338.

Indeed, the U.S. action recognizes Israel’s annexation of the Golan — a claim that Israel itself has never asserted! The Israeli Knesset’s swift passage of the Golan law in 1981 deliberately avoided proclaiming Israeli sovereignty over the plateau conquered in June 1967. Instead, the law endorsed the extension of Israeli “law, jurisdiction, and administration” — no more, no less.

In some respects, however, Trump’s Golan proclamation changes nothing at all. With or without U.S. recognition, no one in Israel envisions negotiating with Syria over the return of the Golan Heights as part of a peace agreement. Israel applauds the U.S. decision as “historic” and the U.S. issues new maps showing the Golan as sovereign Israeli territory, but day to day life on the plateau will not change. Israel has administered the area not as an occupier but as the de facto sovereign for decades. The U.S. declaration will not change that.

Will UNDOF’s mandate be renewed or modified in these new circumstances?

On March 27 at a Security Council briefing the U.S. representative insisted that the U.S. decision “does not affect the 1974 Disengagement Agreement, nor do we believe that it undermines UNDOF’s mandate in any way. UNDOF continues to have a vital role to play in preserving stability between Israel and Syria, most importantly by ensuring that the Area of Separation is a buffer zone free from any military presence or activities other than those of UNDOF. This decision is of critical strategic and security importance to the State of Israel, and the U.S. believes it can contribute to stability.”

Syria, not surprisingly, has condemned the U.S. move. But Damascus too still supports UNDOF, and more broadly the ceasefire that, notwithstanding the new U.S. policy, reflects international backing for “land for peace” and an abiding interest in preventing a descent into war. The renewal of UNDOF’s mandate will undoubtedly receive unanimous Security Council support, support made all the more relevant because of the challenge asserted by the Trump administration.