Whither the MFO? The US presence in Sinai has seen its best days 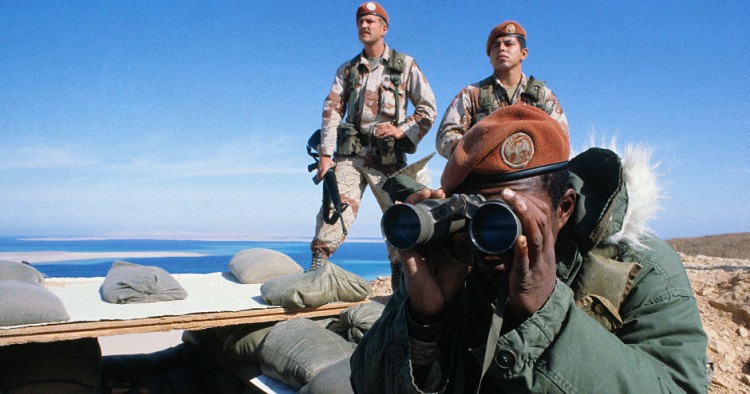 This article is part of an ongoing debate about the MFO. Read the response from Amb. (ret.) Gerald Feierstein.

The Sinai-based Multinational Force & Observers (MFO) will soon celebrate its 39th anniversary. Like most of what the MFO does, recognition will be low key and understated. The MFO has always operated under the radar, but this may soon be changing.

The organization was established by the U.S., Israel, and Egypt to monitor the separation of forces agreements at the heart of the 1979 Israel-Egypt Peace Treaty. Almost two decades after U.S. officials first raised the prospect of ending U.S. support for the mission, the Trump administration, with critical backing from the Pentagon, may now be poised to close the books on the MFO.

Signed in 1979 by Egypt’s Anwar Sadat and Israel’s Menachem Begin, the Israel-Egypt Peace Treaty was a milestone in the conflict between Israel and the Arabs, removing Egypt from the Arab military calculus against Israel. The MFO was not only a tangible expression of the central U.S. role in maintaining the new relationship between the two former enemies. More broadly, it was also the concrete expression of Washington’s status as the premier, “indispensable” power in the region.

Throughout most of its existence, the organization has been an exemplary example of a successful U.S.-led effort in the international arena to match a well-conceived mission with operational effectiveness.

This record was in large part a function of its modest duties and purpose. The MFO is not a peacekeeping organization. The one U.S. combat battalion assigned to the mission was never envisioned as a combatant in a contested battlefield, but rather as an agreed upon monitor, charged with overseeing and confirming implementation of the separation of forces terms of the peace treaty.

Success in this mission was all but guaranteed in an era when both Jerusalem and Cairo were committed to honoring the treaty terms, and when Cairo’s writ went unchallenged in Sinai. Secondment to the MFO for regular and increasingly, National Guard forces, was almost the opposite of a hardship posting. Life at the office, just north of Tel Aviv in the swanky seashore town of Herzliya, was almost idyllic.

The MFO’s routine became a bit more complicated during the second intifada, when Palestinian operations across the Gaza-Egypt frontier occasionally engaged Israeli, Palestinian, and Egyptian forces in short-lived, contained conflict.

After almost a quarter century of peace, however, Secretary of Defense Donald Rumsfeld argued that it was time to declare victory and go home. Already, during Rumsfeld's first meeting with Prime Minister Ariel Sharon in May 2002, he suggested that the Sinai forces be reduced.

American officials proposed withdrawing the logistics battalion while leaving behind the infantry battalion, made up of some 509 soldiers and 27 American command personnel.

Opponents of the Pentagon’s effort successfully argued against any revision of the force posture or mandate. Israel and Egypt agreed then, as today, that the status quo was an important expression of American power, symbolically if not materially, and a demonstrative symbol of the continuing U.S. commitment to the Israel-Egypt axis.

The MFO avoided getting the axe, but the context in which it operated was about to be transformed.

Chaos enveloped Egypt during the last years of the regime of Egyptian President Hosni Mubarak. Sinai became a battlefield, the scene of what is still a dirty war against a stubborn local insurgency animated by popular, parochial complaints of mismanagement and discrimination alongside a full-blown insurrection by forces claiming allegiance to ISIS.

As Sinai moved out of Cairo’s control, Egypt argued successfully with Israel to loosen, on an ad hoc basis, the treaty constraints on Egypt’s military deployment in Sinai. To mollify Egyptian anger at Israel’s unilateral decision to withdraw from the Gaza Strip in 2005, Israel had reluctantly agreed to the deployment of a small contingent of Egyptian military forces, rebranded as police, along the Sinai border with Gaza. In the face of a growing insurrection Egypt now successfully sought Israel’s approval to deploy combat aircraft, tanks, and regular forces through the peninsula.

Rather than modify the treaty prohibitions on such actions, the signatories agreed to ignore them.

What then of the MFO’s mission to monitor compliance with a treaty that the two parties had agreed to violate? And more broadly, how was the MFO to conduct its monitoring mission when Sinai was a battlefield?

Preoccupied with force protection, the organization has increasingly adopted technical and more expensive means of monitoring compliance with the treaty’s separation of forces restrictions, which have in any case been overtaken by the weaponry deployed by Egypt, with Israel’s agreement, to wage its counterinsurgency campaign.

Perhaps as a reflection of its predicament the MFO website appears stuck in time. No recent annual reports are on file and there is a glaring absence of contemporary reporting. Japan’s recent posting of two officials, the first time the country is participating in a monitoring mission outside the UN, rates top billing.

What cannot be ignored, however, is that two of the MFO’s three central tasks — monitoring and verification — have been transformed by the ongoing Egyptian counterinsurgency campaign on the peninsula.

According to a 2018 Army study, “The MFO made many significant changes from 2013-2016, such as abandoning or turning over ten OPs due to security concerns and moving their force headquarters from North Camp to South Camp. They moved all non-essential personnel from North Camp to South Camp, renaming the former HQs Forward Operating Base North, and started a process of automating the task of observing with camera sites. This process began slowly, but accelerated quickly in 2016, bringing transformational change to the MFO as they adjusted the strategies for accomplishing their core mission.”

The MFO’s remaining task — ensuring the freedom of international marine navigation in the Straits of Tiran and unhindered access to the Gulf of Aqaba — has been secured by a precedent-setting trilateral understanding, blessed by Washington, between Israel, Egypt, and Saudi Arabia. A small MFO contingent is today based on Tiran, one of the two main islands guarding access to the Red Sea, now controlled by Saudi Arabia.

The Saudi agreement to honor the terms of the Israel-Egypt treaty attests to the dramatic changes in the regional strategic environment that have occurred in the MFO’s area of operations during the last four decades. The Pentagon’s look at U.S. global deployments is meant to reassess the contemporary relevance of such commitments, which, in many cases, were made when the world was a very different place.

The MFO, explained Chairman of the Joint Chiefs of Staff Gen. Mark Milley at a Feb. 26 hearing of the House Armed Services Committee, is part of this “blank slate review” of U.S. deployments across the globe undertaken as the United States continues to “pivot” to Asia.

Gen. Milley knows Sinai well. His operational deployments include a tour with the MFO. In his testimony before the House Armed Services Committee Milley highlighted the MFO deployment in Sinai in the context of the global review now being undertaken by the Pentagon. “Is [the MFO] still a valid military mission for U.S. forces? Yes/No. Arguments are being made by both sides. ... If [it is] not, then we delete it.”

Is the MFO a fading echo of a world transformed or a still-relevant example of U.S. international leadership? That is the question now being addressed by the Trump administration in Washington. No matter the decision, one thing is certain: The MFO’s best days are behind it.

Correction: April 7, 2020
This version of the article corrects details about the MFO and its deployment of forces in the Sinai.

Photo by Bettmann/Contributor via Getty Images