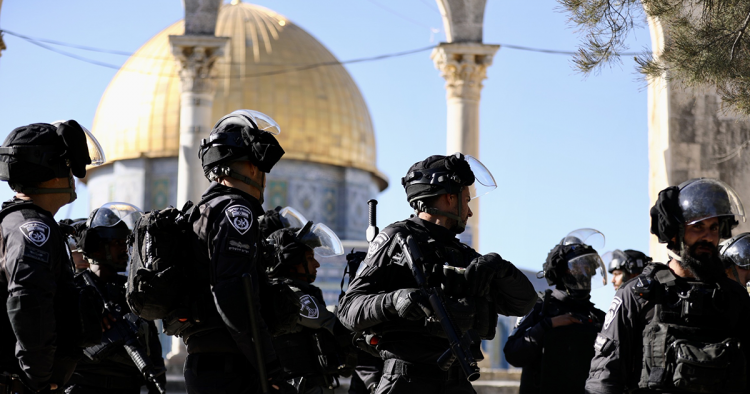 On Friday, April 15, Israeli forces stormed al-Aqsa Mosque in Jerusalem’s Old City, leading to the injury of more than 160 and the arrest of more than 400 Palestinians. The raid took place in the context of increasing violence and a series of events in Jerusalem, some West Bank cities, and individual operations in Israel over the past two weeks. Domestically, the Palestinian Authority, along with Hamas and other resistance factions, condemned the successive incursions and blamed the occupation for the escalation, as have a number of Arab and other states.

Almost exactly one year ago it was precisely this sort of raid on al-Aqsa, amid the forced displacement of Palestinian families in East Jerusalem, that prompted Hamas to respond by firing rockets at Israel, setting off an 11-day war — the fourth major aggression against the Gaza Strip and conflict between Hamas and Israel since 2008. While the events now taking place in Jerusalem and the West Bank are very similar to those of May 2021, the political contexts are different on all sides. Although Israel carried out an airstrike on April 18 following rocket fire from the Gaza Strip, the situation is unlikely to lead to a repeat of last year’s Gaza war. There are four main reasons for this.

While the violence in Jerusalem, where events have been escalating since 2015, may not affect Gaza more broadly this time around, the situations in both Jerusalem and Gaza remain fragile and highly volatile and could blow up at any time. To prevent future outbreaks two things are urgently needed: ending the internal Palestinian division and imposing some constraints on Israeli actions, particularly the use of force, against Palestinians, their properties, and holy sites. Otherwise the cycle of violence will continue to play out over and over.

Omar Shaban is the founder and director of PalThink for Strategic Studies and an analyst on the political economy of the Middle East. The views expressed in this piece are his own.