The Yemen government reorganizes, but will it open the door to end the conflict? 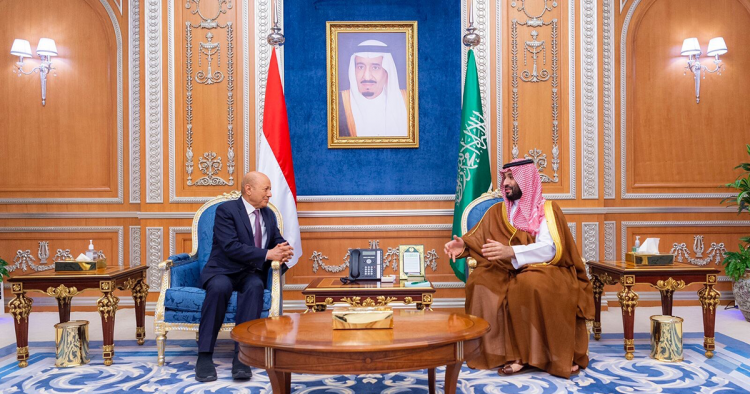 At the conclusion of a week of Yemeni-Yemeni internal deliberations hosted by the Gulf Cooperation Council (GCC) in Riyadh, the government of Abdo Rabo Mansour Hadi announced sweeping changes meant to clear away obstacles to cooperation among the anti-Houthi forces in the country and, perhaps, open the door to negotiations to end the civil war now in its eighth year. Most significantly, Hadi announced he would step aside in favor of a Presidential Council headed by the well-regarded Rashad al-Alimi, who served in the Ali Abdullah Saleh government as deputy prime minister for defense and security. He also removed the controversial vice president, Islah-aligned Ali Mohsen al-Ahmar. Saudi Arabia and the UAE quickly responded with a desperately needed $3 billion cash injection that can help stabilize the Yemeni economy and stem rampaging inflation.

On its face, the move appears to advance the long-stalled implementation of the 2019 Riyadh Agreement that was to bring the secessionist Southern Transitional Council (STC) into alignment with the Hadi government, appoint new cabinet members, and integrate militia elements into the Yemeni armed forces. Earlier efforts in 2020 and beyond failed to move that needle. With Hadi and al-Ahmar sidelined, prospects for implementation may be improved. But the new effort will likely confront many of the same challenges that my colleague Ibrahim Jalal identified in his analysis of the Riyadh Agreement a year ago. In particular, with the inclusion of Aydarous al-Zubaidi, head of the STC, and Sheikh Sultan al-Aradah, governor of Marib, in the Presidential Council, will al-Alimi be able to organize a coherent leadership structure or will this remain a “team of rivals” pursuing disparate goals and objectives? The inclusion of UAE-backed militia commanders Tareq Saleh and Abdel Rahman Abu Zarah in the council will also raise questions about the prospect for greater coordination and cooperation among government-aligned forces on the battlefield.

Beyond the ability of the new government to paper over differences in the anti-Houthi coalition and provide the degree of governance needed to carry Yemen into a political process is the question of Houthi reaction. Specifically, will the Houthis see the changes in government leadership as an invitation to engage in the U.N.-led peace process? The initial reaction by Houthi spokesman Mohammed Abdulsalam was unpromising as he called for a continuation of the Houthi “battle for national liberation,” according to press reports. As I noted in my earlier piece, “A Glimmer of Hope in War-Torn Yemen,” Houthi intentions following the U.N.-brokered two-month truce remain unclear. Although there has been some optimism that the truce may be extended and serve as a prelude to a return to the negotiating table, the Houthis have provided no clear evidence of that intent. Having suffered setbacks in their military operations in Shabwa and Marib governorates in the first few months of 2022, the Houthis may see this period as an opportunity to re-group and re-equip for a new round of fighting after Eid al-Fitr. Today’s announcement may provide them with an opportunity to evaluate the significance of the government reorganization and determine whether they will confront a more coherent, better organized push-back going forward.

When the Houthis refused to participate in the proposed Riyadh Conference, arguing that they would not attend a meeting in the capital of a “party to the conflict,” there was a broad assumption that the meeting had been sapped of significance. Instead, the Houthi boycott may have been a blessing in disguise as it changed the focus of the conclave away from what would likely have been a fruitless attempt to advance a political negotiation to one that offered a new opportunity for the non-Houthi Yemeni political leaders to attempt to unify and agree on a way forward. In that sense, if this effort is successful, it would put the government in a far stronger position when they do sit across the negotiating table from the Houthis to speak credibly on behalf of the majority of Yemenis who do not want to see the Houthis rebuild a theocratic state. To be clear, the success of this latest effort is far from assured. The attempts at papering over differences and relying on ephemeral alliances to govern have failed repeatedly, beginning with the transition government organized under the GCC Initiative in 2011. Hopefully, al-Alimi, the former police official, senior government minister, and high ranking member of President Saleh’s General People’s Congress, can provide the unifying direction that all too often failed Hadi. Beyond the confidence of Yemeni colleagues, al-Alimi, grievously wounded in the June 2011 mosque bombing that targeted Saleh, enjoys as well long-standing and positive relations with the U.S. and other international partners. That will stand Yemen in good stead should there be a return to negotiations and in building a post-conflict future for the Yemeni people.