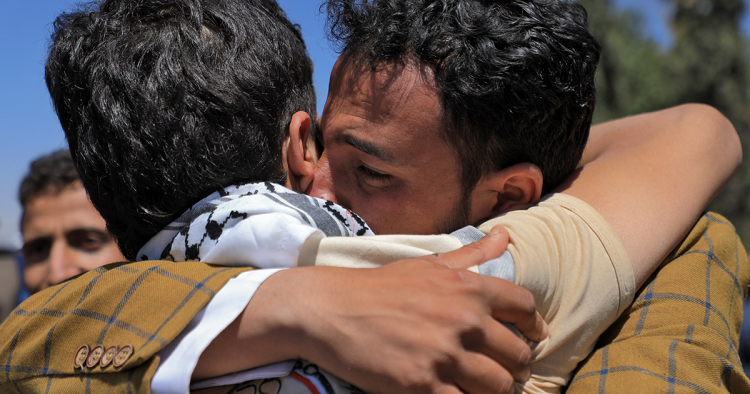 The Feb. 18 briefing by U.N. Special Envoy for Yemen Martin Griffiths included a note that prisoner exchange efforts that started in Jordan in January are still ongoing. To Yemenis who are directly affected by this issue, however, this note is not enough. Despite the success achieved last October with the release of more than 1,000 detainees, the sheer number of detainees remains a major cause for concern — and it continues to increase.

Prisoners of war and political and civilian detainees are two of the most important humanitarian issues in Yemen. As a result of the armed conflict, prisons were filled with thousands of prisoners and civilian detainees. The current conflict in Marib is said to threaten the lives of more than 500 prisoners, in addition to the risk it poses to prisoner exchange mediation efforts more broadly. A recent report on the situation facing detainees in Taiz’s Saleh Prison, the fate of whom is tied to the prisoner exchange lists, confirms seven prisoners have already died as a result of torture and medical negligence. This is out of a total of 956 abductees and detainees, of whom 60 are children.

As early as 2015 the Yemeni government submitted a list of 8,567 detainees to be released in exchange for 7,000 from the opposing side, the Houthi movement known as Ansar Allah. The fate of these men had been linked to each other for years, despite the apparent difference between an armed combatant captured on the front lines and a civilian illegally detained on political and security grounds. In both cases, Yemenis are held in various prisons and subjected to abuse, forced disappearance, and torture, including sexual violence. Of late they face the added risk of sickness or death as COVID-19 spreads rapidly within the prisons. All of this comes against the backdrop of a complete denial of the real number of prisoners and their places of detention, a total lack of humanitarian standards, and a complete disregard for the extent of the spread of the virus among them. Information from our sources suggests that in the central prisons of Ibb, Sanaa, and Taiz the degree to which the virus has spread is truly frightening.

One of the reasons why internationally led mediation efforts are not able to make much progress is that they limit themselves to identifying lists of prisoners and detainees to be exchanged instead of going into the root causes of the conflict and the reasons behind the non-implementation of previous agreements. For example, the cease-fire draft known as the Joint Declaration, which was published last July, did not address the issue of prisoners and detainees, but instead referred to the previous mechanism resulting from the Stockholm Agreement, which itself faced a dead-end.

That mechanism lacked realistic procedures and safeguards that would ensure implementation by the parties. One of the most important mistakes made by the Office of the U.N. Special Envoy from the outset was to turn the file into a regional-international issue and insist on acting alone in managing it in isolation from influential Yemeni actors who are not involved in the conflict, such as civil society organizations and women leaders working in this field, both as peace mediators and in relief work.

By contrast, local mediation has had impressive results, and local mediators, including women, have become key players in resolving this humanitarian issue. Local mediation efforts, some of which I personally co-led since the beginning of the conflict, have succeeded in releasing hundreds of prisoners from all sides.

I can say this because I know it from my own experience. After a seven-month-long intensive effort, on Dec. 17, 2015 I successfully achieved the exchange of 480 prisoners as a first batch out of 560 prisoners between the Houthis and the Yemeni government.

To complete this exchange, I first had to compile the names of prisoners from various prisons and verify their information from the disclosures submitted by the warring parties. These totaled more than 6,000 prisoners of war, including children, some of whom were between 13 and 18 years old.

This was not easy. I faced a lot of challenges, including some directed at me as a woman who succeeded in a traditionally male domain. I received death threats and faced attempts by powerful figures to stop the exchange. In addition to practical and logistical challenges such as financial conditions, I was completely let down by international organizations, including U.N. offices in Yemen such as UNICEF and the Red Cross, to whom I had turned to support me in my mediation efforts.

There were also contextual difficulties because of the complexity of the conflict itself. The multiplicity of parties and the continuing fighting have led to a constant rise in the number of prisoners, with the parties speculating about the real numbers involved and the fact that there are those whose whereabouts are still unknown and those who were forcibly disappeared.

One of the most important lessons I have learned in my experience is that Yemeni society and local social leaders must be involved and that the discussions should not be limited to just the warring parties. In my efforts, I have always made sure that everyone with whom I negotiated understood that I was extremely passionate about this issue and that to me this was not just a job or a temporary project. I also leaned on local values and supporting customs in my mediation work, taking into account the specificity of Yemeni reality and the tribal and political system. Needless to say, I used my social network and contacts to support this process.

Achieving tangible results on the ground in the case of prisoners and detainees requires the international community, the United Nations, and the Office of the U.N. Special Envoy to integrate their efforts with Yemeni peace makers, particularly female activists and influential local leaders.

Not only did Yemeni women leaders manage to break stereotypes and change the perception of the role of women in conservative Yemeni society, but Yemeni society, including the parties to the conflict, also became more trusting and respectful of politically balanced women leaders. The parties are assured of the women mediators’ genuine desire to reach a fair solution, above and beyond personal or political interests. Finally, including women in all stages of the peace process and beyond is a universal right in accordance with U.N. Security Council Resolution 1325 and supporting resolutions. We are not asking the international community and the parties to the conflict to do us a favor — we have the right to be included.

Experience has shown that to bring an end to the war in Yemen, international mediators need to stop ignoring and excluding local efforts and peace builders. Achieving sustainable peace will not happen without the equal involvement of women leaders and the inclusion of those who had no hand in the war. We can effectively contribute to achieving trust-building measures and facilitate an environment conducive to sustained peace. The world needs to stop going about business as usual and listen to us because we have a record of success that is much better than that of the international mediators. At the end of the day, this is our home and we will not rest until we fix it.

Laila Lutf al-Thawr is the Assistant Secretary-General and Head of the Political Bureau and Relations of the Arab Hope Party. She is also president of Sam, a political, human rights, and peace-building organization. Laila is an expert in negotiating and resolving armed conflicts, a member of the Women Solidarity Network, and a recipient of the Peace Track Initiative Feminist Leaders Fellowship. The opinions expressed in this piece are her own.

For Yemen’s Houthis, the status quo is the key to power