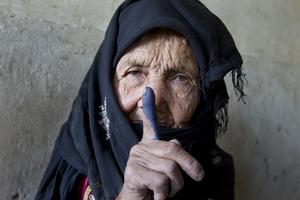 The Middle East Institute's Louis R. Hughes Lecture Series is pleased to present Ali A. Jalali (National Defense University),  Andrew Wilder (United States Institute of Peace), Amanullah Ghilzai (Senior AfPak Journalist), and Amb. Omar Samad (New America Foundation) for a panel discussion on Afghanistan's presidential election and its implications for the country's political future. Afghanistan's April 5 presidential elections have the potential to be the most consequential in the country's recent history, determining not just who emerges as the successor to Hamid Karzai, but also the economic and political viability of the Afghan state that emerged in 2001. Drawing on their collective experience observing Afghanistan's society and electoral politics, this distinguished group of panelists will address the election's outcome, its bearing on chances for Afghan reconciliation, and the implications of the election for Afghanistan's future ties with its regional neighbors, the United States, and the West.

Ali A. Jalali is currently a distinguished professor at the Near East South Asia Center for Strategic Studies (NESA) and a researcher at the Institute for National Strategic Studies (INSS) at NDU. He served as Interior Minister of Afghanistan from January 2003 to October 2005. Prior to assuming the ministerial post in Kabul, Mr. Jalali served as the Director of Afghanistan National Radio Network Initiative and Chief of the Pashto and Persian Services at the Voice of America in Washington D.C. A published writer in three languages (English, Pashto, Dari/Farsi), Mr. Jalali is the author of numerous books and articles on political, military and security issues in Afghanistan, Iran, and Central Asia including topics related to Islamic movements in the region.

Andrew Wilder is the vice president of the Center for South & Central Asia at the United States Institute of Peace (USIP). Prior to joining the Institute, he served as research director for politics and policy at the Feinstein International Center at Tufts University. Previously, Wilder served as founder and director of Afghanistan's first independent policy research institution, the Kabul-based Afghanistan Research and Evaluation Unit (AREU). This was preceded by more than 10 years managing humanitarian and development programs in Pakistan and Afghanistan. Wilder is the author of  The Pakistani Voter: Electoral Politics and Voting Behaviour in the Punjab (Oxford University Press, 1999), and has written numerous other publications. He has conducted extensive research exploring issues relating to state-building, development and stabilization efforts in Afghanistan and Pakistan.

Amanullah Ghilzai has 18 years’ experience in the Afghan and Pakistani politics. He has worked with the BBC in London, Voice of America in Washington D.C., and Radio Free Europe in Prague. As a senior journalist from the Afpak region, Amanullah has contributed numerous articles to the BBC, VOA, and the Daily Dawn of Pakistan.

Amb. Omar Samad is senior Central Asia fellow at the New America Foundation in Washington, D.C. He is also founder and president of Silkroad Consulting, L.L.C. He was senior Afghan expert at the U.S. Institute of Peace (2012-2013). He served as ambassador of Afghanistan to France (2009-2011), and ambassador to Canada (2004-2009). He was the spokesperson for the Ministry of Foreign Affairs in Kabul (2001-2004). He has a master's degree in International Relations from The Fletcher School of Law and Diplomacy and a BA in communications and international studies from American University.

Marvin G. Weinbaum (Moderator) is professor emeritus of political science at the University of Illinois at Urbana-Champaign, and served as analyst for Pakistan and Afghanistan in the U.S. Department of State's Bureau of Intelligence and Research from 1999 to 2003. He is currently a scholar-in-residence at the Middle East Institute in Washington DC. He is the author or editor of six books and has written more than 100 journal articles and book chapters. Dr. Weinbaum was awarded Fulbright Research Fellowships for Egypt in 1981-82 and Afghanistan in 1989-90, and was a senior fellow at the United States Institute of Peace in 1996-97. He has been the recipient of research awards from the Social Science Research Council, the Ford Foundation, the American Political Science Association, and other granting agencies.