World Bank Report Launch | A New State of Mind: Greater Transparency and Accountability in the Middle East and North Africa 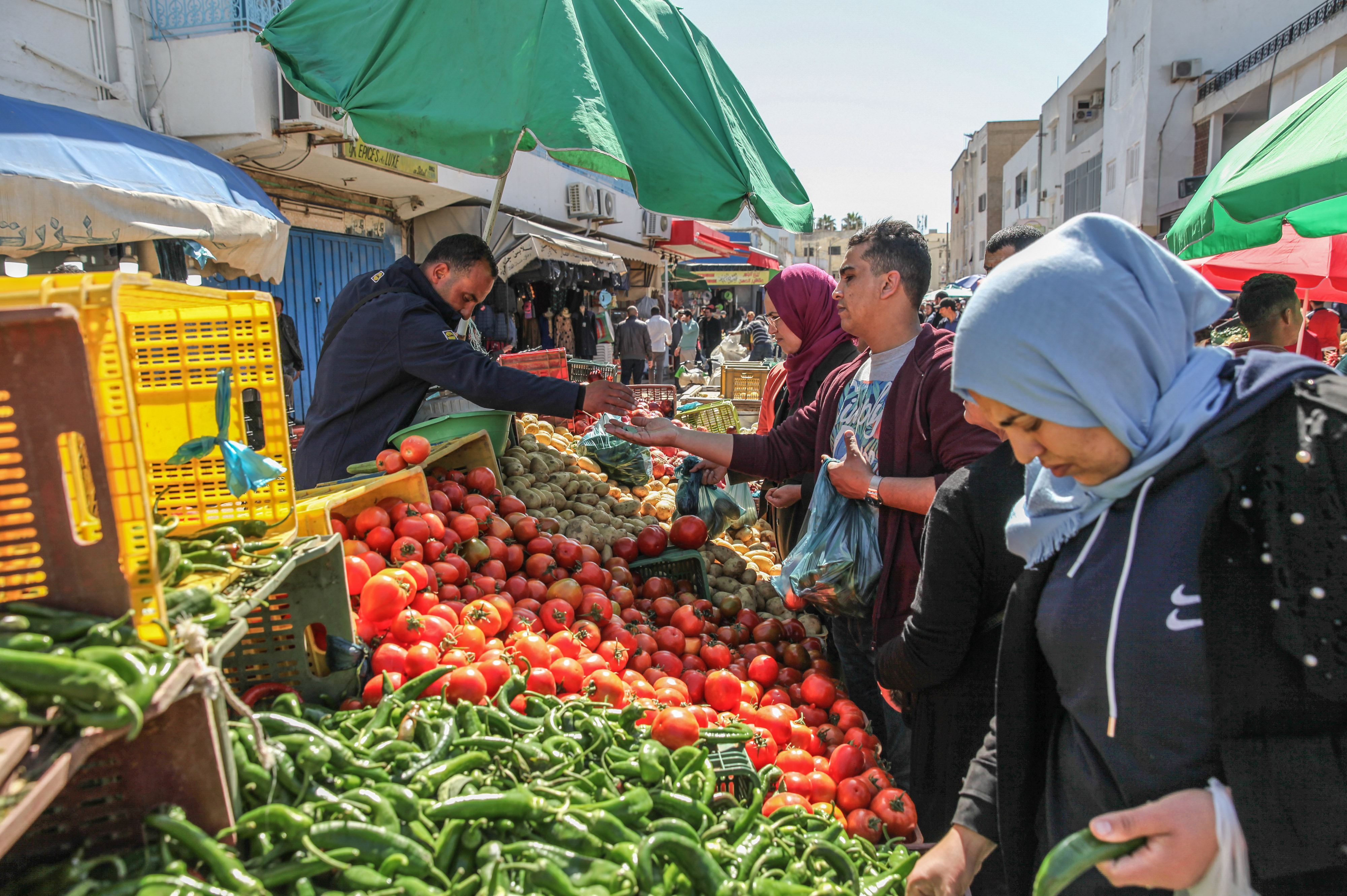 Please join us for the launch and presentation of the World Bank’s latest Middle East and North Africa Economic Update, a twice-yearly forecast that looks at growth prospects for the region. Titled “A New State of Mind: Greater Transparency and Accountability in the Middle East and North Africa,” the most recent edition underscores how many MENA countries are struggling to overcome the lasting impact of the pandemic while facing new shocks from high oil and food prices, rising global interest rates, and slowdowns in major world economies.

Join a vibrant discussion and hear directly from the authors of the report, which also looks at the upside of improving governance and how reforming MENA institutions can better prepare the region’s countries for future challenges.

Ferid Belhaj
Belhaj took up the position of World Bank Vice President for Middle East and North Africa on July 1, 2018. Prior to this, Mr. Belhaj served 15 months as the Chief of Staff of the President of the World Bank Group.

From 2012 to 2017, Mr. Belhaj was World Bank Director for the Middle East, in charge of World Bank work programs in Lebanon, Syria, Jordan, Iraq and Iran, based in Beirut, Lebanon. In this capacity, he led the Bank engagement on the Syrian refugee crisis and its impact on the region, including the creation of new financing instruments to help countries hosting forcibly displaced people; the ramping up of the Bank drive towards the reconstruction and recovery of Iraq during and after the ISIS invasion and the scaling up of the Bank's commitments to Lebanon and Jordan.

Before taking up his Mashreq assignment, Mr. Belhaj served as World Bank Director for the Pacific Department (2009-2012), where he developed a regional strategy that scaled up Bank engagement in small and fragile states, and tripled lending operations of the International Development Agency, one of the five institutions under the umbrella of the World Bank Group that provides interest-free loans and grants for Low-Income Countries.

From 2007 to 2010, Mr. Belhaj was the World Bank’s Special Representative to the United Nations in New York, where he engaged with various UN agencies on a range of programs, mainly climate change, the Millennium Development Goals, fragile and post-conflict states and the global financial and food crises.

Ferid Belhaj served as World Bank Country Manager for Morocco (2002-2007), where he developed a new and multifaceted dialogue with one of the best performing Middle-Income countries.

A Tunisian national, Mr. Belhaj joined the Bank in 1996 as Senior Counsel in the Legal Department, managing a number of legal and judicial reform projects. He also served as Bank Counsel for countries, including Egypt, Morocco, Iran, Algeria and Thailand.

Roberta Gatti
Gatti is the Chief Economist of the Middle East and North Africa (MENA) region of the World Bank. In that role, she oversees analytical work to support the Bank’s operations and economic surveillance in countries in the region. In her previous capacity of Chief Economist for the Human Development practice group, she co-led the conceptualization and release of the World Bank Human Capital Index and oversaw the Service Delivery Indicators data initiative. Roberta joined the World Bank in 1998 as a Young Professional in the Macro unit of the Development Research Group. She has since led analytical agendas on growth, firm productivity, gender, social inclusion and labor markets, including as the Global Lead for Labor policies. She has also managed teams and lending portfolios in both the MENA and the Europe and Central Asia regions.

Roberta’s research is published in top field journals such as the Journal of Public Economics, the Journal of Economic Growth, and the Journal of Development Economics. Roberta is also the author of numerous flagship reports, including Jobs for Shared Prosperity: Time for Action in the Middle East and North Africa; Being Fair, Faring Better: Promoting Equality of Opportunity for Marginalized Roma; The Human Capital Project; and The Human Capital Index 2020 Update: Human Capital in the Time of COVID-19.

Roberta holds a B.A. from Università Bocconi and a Ph.D. in Economics from Harvard University. She has taught at Georgetown and Johns Hopkins Universities.

Paul Salem
Salem is president and CEO of the Middle East Institute. He focuses on issues of political change, transition, and conflict as well as the regional and international relations of the Middle East. Salem is the author and editor of a number of books and reports including Escaping the Conflict Trap: Toward Ending Civil Wars in the Middle East (ed. with Ross Harrison, MEI 2019); Winning the Battle, Losing the War: Addressing the Conditions that Fuel Armed Non State Actors (ed. with Charles Lister, MEI 2019); From Chaos to Cooperation: Toward Regional Order in the Middle East (ed. with Ross Harrison, MEI 2017), Broken Orders: The Causes and Consequences of the Arab Uprisings (In Arabic, 2013), "Thinking Arab Futures: Drivers, scenarios, and strategic choices for the Arab World", The Cairo Review Spring 2019;  “The Recurring Rise and Fall of Political Islam” (CSIS, 2015),  Bitter Legacy: Ideology and Politics in the Arab World (1994), and Conflict Resolution in the Arab World (ed., 1997).  Prior to joining MEI, Salem was the founding director of the Carnegie Middle East Center in Beirut, Lebanon between 2006 and 2013.  From 1999 to 2006, he was director of the Fares Foundation and in 1989-1999 founded and directed the Lebanese Center for Policy Studies, Lebanon's leading public policy think tank.

Salem is also a musician and composer of Arabic-Brazilian jazz. His music can be found on iTunes.

Karen Young
Dr. Young is a political economist focusing on the Gulf, the broader MENA region and the intersection of energy, finance and security. She is a Senior Research Scholar at the Columbia University Center on Global Energy Policy. She was a Senior Fellow and Founding Director of the Program on Economics and Energy at the Middle East Institute, and currently serves as chair of the program's advisory council. She was a Resident Scholar at the American Enterprise Institute, and has been a professorial lecturer at George Washington University, teaching courses on the international relations of the Middle East. She regularly teaches at the US Dept of State Foreign Service Institute. Earlier, she was Senior Resident Scholar at the Arab Gulf States Institute and a Research Fellow at the London School of Economics and Political Science, Middle East Centre. She led a seminar series on emerging markets in MENA at Johns Hopkins SAIS. At the American University of Sharjah, she served as Assistant Professor of Political Science from 2009-2014. Prior to joining AUS, she held research and administration roles at New York University in NYC.

Her second book, The Economic Statecraft of the Gulf Arab States: Deploying Aid, Investment and Development Across MENAP, is due out at the end of 2022 with IB Tauris/Bloomsbury. Her first book, The Political Economy of Energy, Finance and Security in the United Arab Emirates: Between the Majilis and the Market, was published by Palgrave Macmillan in 2014. She founded and wrote dozens of articles for Market Watch at the Arab Gulf States Institute in Washington. She has published articles in the Financial Times, Bloomberg, Foreign Affairs, Foreign Policy, Lawfare, Al Monitor, ORIENT, Oxford Analytica, Washington Institute for Near East Policy, the Conservative Middle East Council, The National and Gulf News, Journal of Arabian Studies, Georgetown Journal of International Affairs, Current History, Gulf Affairs, Security Dialogue, Internationale Politik and Middle East Policy, among many academic and analytical outlets. Her comments have been featured on NPR, CBS, CBC, AFP, in the New York Times, Financial Times, Bloomberg, Wall Street Journal, the Washington Post, Reuters, Al Arabiya, Arab News, Debtwire, MEED and MEES.

Her work has been supported by grants from Smith Richardson Foundation, the Carnegie Corporation of NY, the Fulbright Program (Ecuador 1997-99; Bulgaria 2005-06), the International Research and Exchange Board (IREX), the American Council of Learned Societies (ACLS), the Woodrow Wilson Center, US State Department Middle East Partnership Initiative (MEPI), APSA MENA Fellows Program and Emirates Foundation (via LSE). She holds a PhD in Political Science from the City University of New York Graduate Center, an MA in Political Science from Columbia University, an MA in International Economics from the Universidad Andina Simon Bolivar in Quito and a BA in Anthropology from Wellesley College.