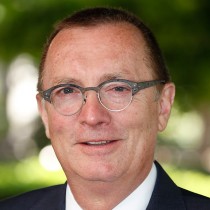 Jeffrey Feltman is a member of MEI's Board of Governors. He is also the John C. Whitehead Visiting Fellow in International Diplomacy in the Foreign Policy program at the Brookings Institution. His research includes examining United Nations and other mediation efforts to draw lessons about potential improvements in multilateral conflict prevention and resolution in an increasingly polarized global context. He is also a senior fellow at the Washington-based United Nations Foundation.

He previously served for nearly six years as the under-secretary-general for political affairs at the United Nations in New York. In that capacity, he traveled extensively and was the chief foreign policy advisor to both Secretary-General Ban Ki-moon and Secretary-General Antonio Guterres. Feltman frequently briefed the Security Council in both public and closed-door sessions on a wide variety of peace and security issues, including on thematic issues such as terrorism and nuclear proliferation, as well as on country-specific conflicts. From 2016 until his April 2018 retirement from the U.N., he also was the special envoy for the implementation of Security Council Resolution 1559 (2004).

As part of his U.N. responsibilities, Feltman was the chairperson of the U.N.’s Counter-Terrorism Implementation Task Force and the executive director of the U.N. Counter-Terrorism Center from July 2012 until July 2016. United Nations special envoys and special representatives heading U.N. political missions reported to the secretary-general through Feltman and received guidance from him. He oversaw U.N. mediation and conflict prevention work and also served as the U.N.’s focal point on election assistance to approximately 50 countries annually.

Feltman was a U.S. foreign service officer for over 26 years, focusing largely on the Middle East and North Africa. Feltman was the assistant secretary of state for Near Eastern affairs from 2009 until his retirement from the State Department, with the rank of career minister, in May 2012. Before his 2004-08 tenure as U.S. ambassador to Lebanon, Feltman also served in Erbil, Baghdad, Jerusalem, Tel Aviv, Tunis, Amman, Budapest, and Port-au-Prince. Feltman is a two-time winner of the Presidential Service Award, as well as a recipient of State Department awards, including several Superior Honor Awards and the James Clement Dunn Award for Excellence in Leadership. The American Foreign Service Association conferred the Christian A. Herter Award for Constructive Dissent and also the Sinclaire Language Award.