Afghan Hazara Refugees in Indonesia: In “Transit” or in “Limbo”? 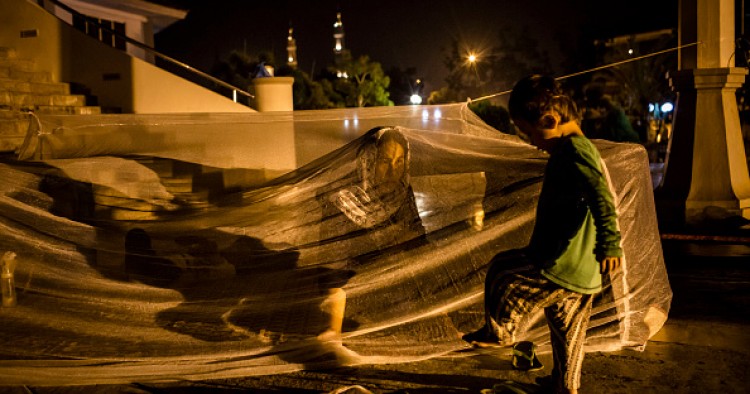 Over the past 20 years, Indonesia — the world’s fourth most-populous country and the largest Muslim-majority nation — has evolved into a democracy based on tolerance and a moderate interpretation of Islam, and has emerged as one of Asia's fastest-growing economies. This essay is part of a series on “Indonesia and the Middle East: Exploring Connections,” which examines the nature, scope, and implications of Indonesia's ties with the MENA region. See more ...

Refugees and asylum seekers, including Afghans, currently residing in Indonesia, have few choices and face many uncertainties and difficulties. Theoretically, there are three options available to them, the so-called “durable solutions”: resettlement to third countries, return to their own countries (repatriation) or integration in transit countries. However, in practice, none of these options can be exercised easily.

There is no guarantee that a third country will resettle Hazaras. As Puong has noted, one of the difficulties encountered by refugees lies in the obvious gap between the existence of a right to asylum and the lack of a corresponding state duty to grant asylum.[2]International law clearly does not provide for a duty to grant asylum.[3]

Whereas states are under no obligation under international law to grant asylum to refugees, they are still bound by the principle of non-refoulement as defined in article 33 of the 1951 Refugee Convention and now considered to be part of customary international law, which provides that no refugee shall be returned to any country “where his life or freedom would be threatened on account of his race, religion, nationality, membership of a particular social group or political opinion.”[4]

Although Indonesia has not ratified the 1951 Convention, the country has generally honored the principle of non-refoulement. With only rare exceptions, Indonesia — the central government, as well as many municipal authorities, non-governmental organizations (NGOs), and local communities — have traditionally provided temporary shelter to refugees and asylum seekers. This was the case, for example, from the 1970s to the 1990s, when Galang and Rempang islands in Riau Island Province served as temporary homes for Vietnamese and Cambodian refugees.[5]

Nevertheless, it is important to emphasize that Indonesia lacks a legal mechanism and comprehensive policy for the protection of refugees. Indonesia is a party to the Convention against Torture and Other Cruel, Inhuman or Degrading Treatment or Punishment (since 1998) and to the International Covenant on Civil and Political Rights (since 2005) and is, therefore, bound by the obligations, including non-refoulement, imposed by those treaties.[6] However, Law No. 6/2011 on Immigration, which governs the legal status of immigrants, does not refer to asylum seekers or refugees.[7] Instead, the law describes any person not in possession of a visa as an “illegal immigrant” and requires that individuals without documentation be held in detention, unless they are children, sick, women about to give birth, or victims of human trafficking or smuggling.[8]

Presidential Decree (Peraturan Presiden) No. 125 Concerning the Handling of Foreign Refugees, issued in 2016, provides a much-needed definition of refugees under Indonesian law, in line with the Refugee Convention, but does not offer a pathway to protection. Instead, it provides that all protection claims must be referred to the UN High Commissioner for Refugees (UNHCR).[9] The decree does not establish a domestic legal mechanism. Given the absence of a coherent policy for refugee protection, Decree No. 125 falls short of offering the legal certainty that refugee advocates had hoped for. Many points remain vague, including responsibility for funding activities after initial reception. As in the past, most costs are likely to be borne by the International Organization for Migration (IOM), whose largest donor is Australia.

Meanwhile, as Fiske has shown, refugees in Indonesia, who are not housed in UNHCR camps, lead precarious lives: they are not entitled to move freely around the country, are not permitted to work or engage in business activity, and lack access to welfare, health, and other social services.[10] Missbach has shed light on the daily hardships faced by Afghan and other refugees and asylum seekers living in “limbo” in Indonesia.[11]

The Plight of Afghan Hazaras

According to the United Nations High Commissioner for Refugees (UNHCR), there were 14,405 refugees and asylum-seekers in Indonesia at year’s end in 2016 — an increase of more than 3,000 from the previous year.[12] However, as of July 1, 2017, just 322 refugees had departed for resettlement in a third country.[13] The rest were still stranded in Indonesia.

Roughly half of the refugees and asylum seekers living in Indonesia are from Afghanistan, and most of those are members of the Hazara ethnic minority.[14] Hazaras have been the victims of systematic discrimination and often repeated targeted violence and resulting displacement from Afghanistan.[15]

The largest concentration of Hazaras in Indonesia lives in the town at the foot of Mount Gede — an active volcano that last erupted in 1957 — in Bogor Regency.[16] For purposes of this analysis and borrowing from Fiske, the Hazara transit migrant community can be roughly divided into three groups.[17]

The first group can be found in the small town of Cipayung. Most of these individuals are classified by the UNHCR as “single males,” though many of these men in fact have wives and children who are not with them in Indonesia. Most refugees in Cipayung largely survive on some form of private financial support from their families in Pakistan, Afghanistan, and among their respective diaspora. This meager support is barely enough to cover the cost of food and shelter.

A second group can be found in Cisarua, further up Mount Gede, past Cipayung. Like the Cipayung refugees, these individuals have little or no access to financial aid and must rely on family and diaspora support. However, members of this group have adjusted to their changed circumstances with remarkable success.  The community was formed around a refugee-run school that opened in August 2014 and now has 200 students and 17 volunteer staff. The school has provided the community a focal point and shared project in which all are heavily involved. Many other activities have grown from this, including men’s, women’s and mixed soccer teams, art exhibitions, a karate club, and at least two more independent schools. The community has a strong social media presence and manages its own public representation, focusing on a narrative of refugee capacity rather than need. The community development approach in Cisarua is yielding significant benefits in this respect. Pioneering community-building and self-help efforts have been a source of pride within the transit migrant community, as well as a practical vehicle for developing skills and knowledge, such as English-language abilities, organizational management, teamwork, and public communications.[18]

A third group of refugees can be found in the laneways behind the UNHCR offices in Jakarta, sleeping on the street and imploring security guards for an audience with officials.[19]

In addition, an indeterminate, though presumably much smaller number can be found scattered in urban areas elsewhere around the country, as for example, a Hazara family of six without any clear path to the future that this author encountered in Jakarta City Center in July 2018. Since arriving in Indonesia from Quetta, Pakistan three years ago, the family has lived in temporary shelter in West Jakarta without any clear indication as to whether they might be resettled in a third country. Members of the family are barred from working. The children have been provided no access to education. Fortunately, some NGOs and refugees-initiated organization have arranged for informal education (mainly English- and Indonesian-language acquisition) for them and other transit migrants in the Jakarta area.

Some accounts of the plight of Hazaras in Indonesia have reported instances where young boys have been accosted by male predators, subjected to intimidation or threats of violence.[20] Others have documented cases of homelessness.[21]

The struggles of Afghan refugees of ethnic Hazara “stranded” in Indonesia are compounded by the bias and ostracism they sometimes face due to their religious affiliation. Whereas most Hazaras are Shia, Indonesia is a predominantly Sunni Muslim country that has experienced sporadic waves of sectarian tension and violence. Some Muslim news portals have published distorted, if not inflammatory accounts of Hazara refugees, labeling them as “Shia immigrants,” casting doubt on the legitimacy of their claims to refugee status, portraying them as freeloaders, or as being irreligious, deceitful, and disruptive.[22] Hazaras cannot freely practice their religious ceremonies; and fundamentalist groups such as National Anti-Shia Alliance (ANNAS) have stirred up anti-Shia sentiment.[23]

The Outlook for Afghan Refugees in Indonesia

As the country of last embarkation for most unauthorized maritime arrivals in Australia, Indonesia is a transit country. However, Indonesia has few formal policies in place to deal with the increasing inflow of “transit migrants.”

Afghan Hazaras, who represent a significant number of arrivals to Indonesia, hoping to arrange onward passage to Australia, face many of the same difficulties that other asylum seekers and refugees do. However, they are a particularly vulnerable population given their religious minority status.

The outlook for Hazaras and other refugees and asylum seekers languishing in Indonesia has further darkened, as the UNHCR staff have begun to inform them that, given the remote prospects for resettlement, they ought to prepare the best they can to assimilate into Indonesian society or return home.[24] Yet, to date, most Hazaras living in Indonesia remain “a community apart.”[25]

[5] These responses are generally held up as examples of Indonesian humanitarianism, though some accounts have shed light on violence, corruption, and other problems associated with the processing and treatment of Indochinese refugees. See, for example, Sindhunata Hargyono, “Ugly Sanctuary,” Inside Indonesia, April-June 2016, http://www.insideindonesia.org/ugly-sanctuary.

[9] The decree requires that refugees and asylum seekers intercepted by officials in Indonesia be taken to the nearest detention center or immigration office. Upon entering detention, they must undergo various identity checks, and must declare an intention to seek asylum to be referred to the UNHCR. See Hirsch and Doig, “Outsourcing control.”

[14] According to Minority Rights International, relatively recent estimates have suggested that Hazaras make up around nine percent of the population of Afghanistan. See profile of Hazaras, http://minorityrights.org/minorities/hazaras/.