Afghanistan brings Trump and Khan together 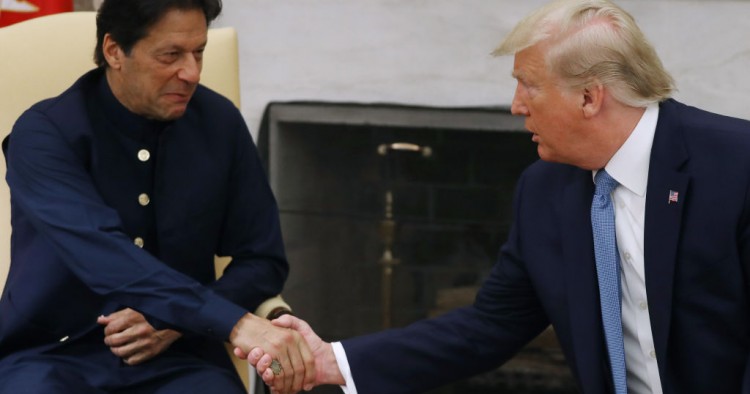 The long-awaited summit between U.S. President Donald Trump and Pakistani Prime Minister Imran Khan raised more questions than it answered. Nevertheless, the message emerging from the meeting has major implications for regional stability and the Afghan peace process.

In immediate terms, the meeting seems to have broken the ice between Washington and Islamabad. It was nothing less than a diplomatic triumph for Khan, a target of Trump’s verbal fire not long ago, to meet the U.S. president as an honored guest at the White House. However, what brought the two leaders together is the intractable Afghan conflict, and it appears Trump now sees Pakistan as part of the solution, rather than the source of the problem.

According to Trump, Washington’s bilateral ties with Islamabad are “much better now than before.” This assertion is a significant departure from his previous bitter remarks, which held Pakistan responsible for the worsening situation in Afghanistan. During the White House meeting, Trump said that Pakistan can save “millions of lives in Afghanistan” as “they have a power that other nations don’t have with respect to Afghanistan.” This must have been music to the ears of Pakistan’s security establishment.

Trump has sought Pakistan’s help to “extricate” the U.S. from the Afghanistan imbroglio —by which he means “bail out.” In other words, Trump requires Pakistan’s help to solve a problem that Pakistan played a role in creating in the first place. In fact, that the superpower needs Pakistan’s help to extricate itself from Afghanistan after nearly two decades is nothing short of a defeat for the U.S. It is also a clear admission that America’s “shock-and-awe” tactics in Afghanistan, along with its attempts to engineer a political structure there, have failed miserably.

The dramatic turnaround in Trump’s position on Pakistan should not be taken lightly. His articulation of the resolution of the Afghan conflict is diametrically opposite to his own South Asia policy, announced with much fanfare in August 2017. He had publicly criticized Pakistan for taking “billions and billions of dollars” from the U.S., and simultaneously “housing the same terrorists that we are fighting.” He even asked India — long Pakistan’s enemy number one — to help the U.S., especially by providing more economic assistance to the Afghan government, setting off alarm bells in Pakistan. Increasing the pressure on Pakistan in January 2018, Trump continued his hardline approach; lambasting the country’s “lies” and “deceit,” he lamented that the U.S. spent billions of dollars while Pakistan subverted American interests in Afghanistan. Washington’s suspension of military assistance to Islamabad was aimed at signaling that there is no free lunch.

But gradually, Trump’s patience began to wear thin as his Afghan strategy started to unravel in the face of a brutal Taliban insurgency. In December 2018, the U.S. president was forced to seek Pakistan’s “support and facilitation” for reaching a negotiated settlement in Afghanistan. The content of Trump’s letter to Khan was first revealed to the media by Pakistan’s foreign office. Now, instead of calling Pakistan out for providing safe havens for the Taliban and urging it not to interfere in Afghan affairs, Trump has changed his tune. He seems unable to wield the big stick vis-à-vis Pakistan that he promised two years ago.

Moreover, Trump’s references to his decision against “winning the war” by “killing 10 million” Afghan people are shocking. Whatever he meant to convey, the U.S. president’s comments have come across as — at best — extremely insensitive in Afghanistan, where the population is understandably extremely nervous about a potentially abrupt U.S. departure. Trump’s intemperate views come at a delicate moment as Zalmay Khalilzad, the U.S. special envoy, is deeply engaged in shuttle diplomacy between Kabul, Doha, and other cities to persuade the Taliban to sign a peace deal. To forge a regional consensus, Khalilzad can take credit for starting a trilateral U.S.-Russia-China dialogue, which at the latest meeting in Beijing invited Pakistan to join as well.

Without understanding the complexity of the Afghan conflict and its ramifications for peace and stability in South Asia, Trump’s dependence on Pakistan to ensure an exit deal for American troops reflects his need to appease his political base ahead of the upcoming election in 2020. In an apparent effort to flatter Khan, Trump also mentioned the issue of Kashmir, to the shock of the Indian government, which maintains that it is a bilateral issue between the two countries that does not require third-party mediation. Few believe these remarks were made in ignorance. Trump’s reasoning seems to be that if New Delhi feels outraged, he can always appease Indian Prime Minister Narendra Modi in a one-to-one meeting in the near future and claim that he was not adequately briefed on the issue.

The Khan government claims to have played a key role in facilitating peace negotiations between the U.S and the Afghan Taliban, but major question marks remain over Pakistan’s ability to meet American expectations. Although Islamabad seems confident that the Taliban can be persuaded to talk to the Ghani government, there does not seem to be any indication that the insurgents are softening their stance. Afghanistan remains as divided along ethno-linguistic lines as ever, and the Taliban controls nearly half of the country.

Earlier in July, a group of prominent Afghans, including some government officials acting in their personal capacity, held talks in Doha with the Taliban at the same time as the separate U.S.-Taliban talks. That came after a previously planned meeting in April had to be cancelled at the last moment due to controversies over the size of Afghan delegation, and its status as a government body. However, despite the breakthrough on intra-Afghan dialogue, the Taliban has continued to launch daily assaults, mainly targeting security forces. Last week, a series of blasts, claimed by the Taliban, has killed dozens of people, including Afghan security personnel. Moreover, the Taliban remains as inflexible as ever about acknowledging the legitimacy of a democratically-elected Afghan government. It will not be easy for Pakistan to persuade the Taliban to agree to a ceasefire.

The importance Khan accorded to his visit to the U.S. can be gauged by the fact that his delegation included the army chief and the head of the Inter-Services Intelligence. But there was more than regional security on the bilateral agenda. Improving trade ties was also up for discussion as well, and Pakistan badly needs American help to ward off the impending threat of blacklisting by the Financial Action Task Force (FATF) for failing to put its house in order on anti-money-laundering and terrorism-financing rules. Pakistan is required to implement its action plan to address these by October. American support is critical to prevent FATF from taking any decision that will have serious implications for Pakistan’s already-beleaguered economy. Faced with crippling financial pressures, Pakistan has reason to cooperate with the U.S.

The two countries need each other at the moment, and as long as both sides have something to gain, U.S.-Pakistani relations are likely to continue on a more positive footing. If either side is unable to deliver on its promises though, this could quickly change. Pakistan’s long-time “double game” in Afghanistan has been set to the side, but not forgotten, and America’s Faustian bargain with the Taliban is likely to embolden Pakistan’s security establishment if the Trump administration does not continue to apply sustained pressure on its economy. The missing element in Trump’s strategy, therefore, is balance; he seems to have gone from all stick to all carrot. Following the successful Washington visit, which has boosted his reputation, Khan said he felt like he’d just won the cricket World Cup. It remains to be seen if, and how, he will return the favor.

Vinay Kaura, PhD, is an Assistant Professor in the Department of International Affairs and Security Studies at the Sardar Patel University of Police, Security, and Criminal Justice in Rajasthan. He is also the Coordinator at the Center for Peace and Conflict Studies in Jaipur. The views expressed in this article are his own.