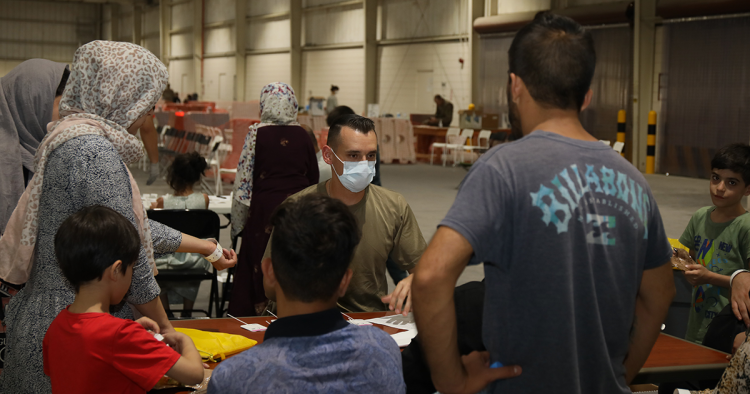 We rarely miss an opportunity to criticize our Gulf Arab partners — sometimes rightly so — for not doing enough to safeguard collective interests. The latest example is their meager military contributions to the U.S.-led, counter-ISIS campaign in 2014-19, which ended up delaying the territorial defeat of the terrorist organization and increasing the costs of war.

But one must acknowledge that on Afghanistan, and especially our just-completed exit from the country, most of our Gulf Arab partners absolutely shined. They deserve a ton of credit for the role they played in our large, challenging, and deadly evacuation — a role which was nothing short of indispensable.

Qatar, the UAE, Bahrain, and Kuwait were instrumental. Saudi Arabia and Oman played important roles in this process too, but the details are less clear. The Saudis have continued to share intelligence with Washington on terrorism threats emanating from Afghanistan and pursued quiet coordination on the evacuation with the Biden administration.

You have to hand it to the Qataris, who understood that this was a moment of crisis for the United States, and that we desperately needed help. They showed courage and determination in their efforts to provide assistance. We should never forget how the Qatari ambassador safely escorted Americans and others through the streets of Kabul, or how his colleagues evacuated a girl’s boarding school, an all-girls robotics team, as well as international journalists, and airlifted as many as 1,500 people. At al-Udeid Air Base in Qatar, the forward headquarters of U.S. Central Command, the Qataris built an emergency field hospital and handed out 50,000 meals a day to Afghan families waiting to be evacuated by the U.S. military. That’s not to mention the generous humanitarian aid Doha has given to Afghanistan for many years and the diplomatic role it played in hosting U.S.-Taliban talks.

The Emiratis were quick and effective with their assistance, too. Among other efforts, they supported the evacuation of over 39,000 individuals from Afghanistan, in addition to 8,500, including women and children, coming to the UAE through national carriers and UAE airports. The UAE established a transit hub and processing center in Abu Dhabi where travelers from Afghanistan underwent health and security checks before heading to the United States and other destinations. But the UAE’s contributions to Afghanistan date back to the early post-9/11 era. The UAE was the first Arab country to send troops to Afghanistan (where they stayed for almost two decades) and its 250 elite forces were the only Arab ones to have undertaken full-scale operations in support of U.S. objectives and trained Afghan commandos in Helmand Province.

Bahrain, home to the U.S. Navy’s Fifth Fleet, allowed flights to utilize the country’s transit facilities amid the evacuations. Its Gulf Air national carrier transported people from Isa Air Base to Dulles International Airport in Virginia. U.S. Naval Forces Central Command’s newly-formed Task Force 58 coordinated with the Bahraini authorities to temporarily facilitate the safe departure of Americans and evacuees from Afghanistan through the island kingdom.

Kuwait, which hosts roughly 13,000 American troops and the forward command of U.S. Army Central, approved passage for 5,000 Afghan evacuees on their way to the United States, and the first flight arrived in the country on Aug. 24. Since Aug. 16, more than 850 Americans and U.S. Embassy personnel transited safely from Afghanistan to the United States via Kuwait on five separate flights.

The Gulf Arab assistance for the United States in its ongoing rescue efforts is extensive and laudable. But there’s a lot more good these countries — and especially Qatar — can do in the post-evacuation phase.

Now that we’ve withdrawn completely, we’ve essentially lost all leverage with the Taliban. Other than applying brute force from over the horizon, there’s nothing else we can do to try to tame the Taliban or prevent them from partnering once again with al-Qaeda and brutalizing Afghan society. That’s not the case with Doha, however, which through its own communication channels and incentives can influence the behavior and governance approach of the Taliban. Saudi Arabia and the UAE, which along with Pakistan were the only countries in the world to recognize the Taliban when they last ruled Afghanistan, are perfectly capable of playing more active diplomatic roles in Kabul, too.

But first, we have to give our Gulf Arab partners a reason why they should continue to help us in Afghanistan. Yes, the entire world benefits from a less chaotic Afghanistan that doesn’t serve as a magnet for global terrorism, but stability in those faraway lands is not an immediate priority for the Gulf Arab states. Their chief security concerns remain Iran’s political violence and sectarian drive in their own Arab neighborhood (though the Qataris, the Omanis, and the Kuwaitis are less worried about Tehran’s ambitions than the Saudis, the Emiratis, and the Bahrainis). If we commit to a joint approach to the Iran threat, they will escalate their assistance not just in Afghanistan but in other parts of the world we care about too.

Bilal Y. Saab is a Senior Fellow and the Director of MEI’s Defense and Security Program. The opinions expressed in this piece are his own.

Sectarianism and ideology: The cases of Iran and Saudi Arabia