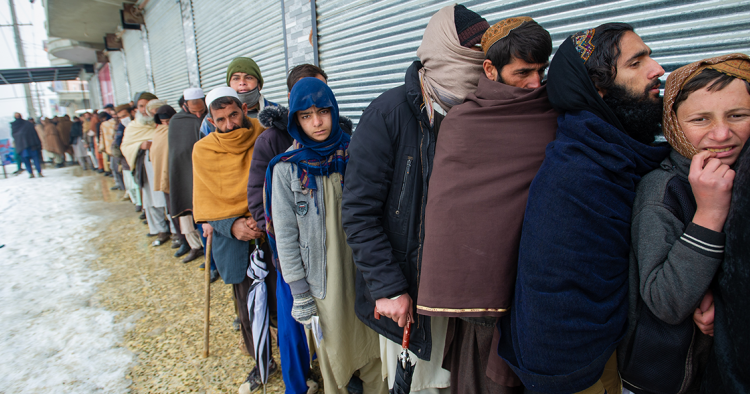 On Jan. 13, U.N. Secretary-General Antonio Guterres expressed alarm that millions of Afghans are on the "verge of death” thanks to a lethal brew of "freezing temperatures and frozen assets.” This was no idle warning. Notwithstanding the decline in fighting following the Taliban’s victory in August 2021, Afghanistan’s economy is in a deepening spiral of impoverishment and destitution.

Afghanistan has long suffered from an overreliance on foreign development and humanitarian aid, especially to pay for government agencies that provide vital public services such as health care, education, energy, sanitation, shelter, and food assistance. The country’s isolated geography, decrepit infrastructure, lack of indigenous technical capacity, and pervasive insecurity have deterred all but a few major foreign investors. Wealthy Afghans often kept their savings in foreign bank accounts rather than invest their capital in national development opportunities. Afghans’ per capita GDP has regularly hovered at the bottom of international rankings.

Developments over the past year have exacerbated these longstanding challenges. Many Afghans have long lived in extreme poverty, but the collapse of government services, curtailment of foreign aid, rising inflation and supply chain bottlenecks, disease and drought have pushed millions below it. Afghans with jobs are not getting paid, while those without them cannot find employment. Food insecurity has become ubiquitous, affecting more than half the country’s approximately 39 million inhabitants. The country is experiencing one of its worst droughts and winters at a time when Afghans lack heating fuel, electricity, and other energy sources. The COVID-19 pandemic and the Taliban’s restrictions on female medical personnel have amplified strains on the country’s overburdened health institutions.

The Taliban’s abrupt takeover of public institutions created a national governance crisis. Fearful of the group, many of Afghanistan’s most experienced civil servants and other skilled professionals have fled to other countries. The Taliban have replaced them with theologians and former fighters, many returning from Pakistan after years in exile. Whatever their ideological loyalties and combat skills, their lack of prior public service and civilian technical skills have diminished their effectiveness as bureaucrats. Many senior Taliban officials remain under international sanctions, impeding their foreign contacts and travel.

In response to the humanitarian emergency, the U.S. and other countries have provided sanction waivers to international agencies and non-governmental organizations to meet basic needs — such as food, education, and health care — for Afghanistan’s poor and at-risk populations. U.N. Security Council Resolution 2615 (2021), adopted on Dec. 22, 2021, carved out a humanitarian exception to the U.N. sanctions regime prohibiting financial transactions with the Taliban, permitting such assistance if provided directly rather than through Taliban-controlled state structures. The U.N. Development Program (UNDP) created a special trust fund and an emergency aid scheme to maintain minimum incomes to vulnerable Afghans, provide critical capital to failing small and micro businesses, and make cash payments to workers on natural disaster mitigation and small infrastructure projects. The World Bank transferred $280 million from its Afghan reconstruction trust fund to the World Food Program (WFP) and UNICEF to provide for the neediest Afghans. The WFP has supplied food, cash, vouchers, and commodities to millions of Afghans. The U.N. High Commissioner for Refugees has provided limited funds, food, and other assistance to the country’s approximately 4 million displaced people.

On Jan. 11, the U.N. and partner organizations made their largest aid appeal for a single country in history. They proposed $4.4 billion for the Afghanistan Humanitarian Response Plan to provide direct payments to Afghan civil servants such as educators and health care providers. They also appealed for over $600 million in additional funding for the U.N. Office for the Coordination of Humanitarian Affairs’ 2022 Refugee Response Plan, which helps internally displaced Afghans and Afghan refugees in the five neighboring countries of Iran, Pakistan, Tajikistan, Uzbekistan, and Turkmenistan. In all cases, the aid would flow through international organizations and partner NGOs rather than through Afghan government bodies.

The same day, the U.S. Agency for International Development pledged another $308 million in emergency assistance to deal with Afghanistan’s humanitarian emergency, raising the total U.S. humanitarian assistance provided to Afghanistan and Afghan refugees since October 2021 to $782 million — including millions of COVID-19 vaccine doses provided through the World Health Organization’s COVAX program. U.S. Secretary of State Antony Blinken explained that the Biden administration was looking for means “to get some more liquidity into the economy in ways that don’t go to the Taliban, but do go to people, into their pockets, so they can provide for themselves.”

Still, the money is not enough

Even so, influential members of the international community have called for additional steps to address the humanitarian crisis. Guterres called for “more money and more flexibility” for humanitarian operations in Afghanistan, including suspending conditions and rules impeding the use of funds to pay civil servants and for vital social services. Furthermore, the U.N. secretary-general maintained that the U.S. has “a very important role to play” in resolving the crisis given the centrality of the American dollar in the international economy and the approximately $7 billion of Afghan reserves in U.S. banks frozen since Aug. 15, 2021. The U.S. move contributed to decisions made by the International Monetary Fund, the World Bank, and other international financial institutions to curtail their own disbursements to Afghanistan.

Laurel Miller of the International Crisis Group accused the Biden administration of “opting to muddle along with half-measures amid an escalating humanitarian crisis.” Miller called on U.S. officials to “swallow the bitter pill of working with the Taliban-led government in order to prevent a failed state in Afghanistan,” which she maintained would lead to mass misery and a “fertile ground for extremist groups to thrive.” Conversely, some administration critics argue that the funds should instead go to evacuating more Afghans who worked with the U.S. and partner militaries from Afghanistan, as well as Americans and their families who were injured during the 9/11 attacks and other terrorist operations linked to the Taliban.

Yet, the deepening crisis cannot be solved simply by sending more money. The collapsing Afghan banking system has become dysfunctional for the country’s cash-based dollarized economy. Even though Afghans have been able to withdraw only a few hundred dollars at a time, these bank savings will soon be exhausted. Their hard-currency purchases are typically imported products, resulting in an outflow of dollars from the country. Inflation, currency depreciation, and other factors have sharply reduced Afghans’ buying power. Meanwhile, Afghanistan’s banks cannot make loans to businesses since they are not receiving deposits from Afghans or foreigners. International sanctions tightly regulate international transactions. Though waivers exist, many foreign commercial lenders decline to deal with any Afghan entities for fear of violating the regulations. Additionally, by focusing on mitigating immediate suffering through emergency assistance, foreign providers reinforce Afghanistan’s unsustainable dependence on foreign aid.

Working with the Taliban remains a wild card. The group has followed international injunctions to permit humanitarian organizations to provide aid directly to recipients rather than through Taliban-controlled public institutions. Due to the increased security following the Taliban victory, foreign aid providers — often with armed Taliban escorts — can now reach previously hard-to-access regions. On Jan. 12, however, the Taliban proposed establishing a body to supervise aid disbursements in which their representatives would join those of foreign donors. Though the group is dissatisfied with its exclusion from the aid disbursements, the international community has refused to give the Taliban such a role. There are understandable concerns that the group would exploit the aid to consolidate power, divert assistance to sanctioned entities, and discriminate against women, ethnic minorities, and other recipients. Still, the Taliban have circumvented some controls, such as by using foreign-donated wheat to pay civilian workers directly but in kind.

Though practices vary by location, the Taliban have barely moderated their policies from those the group enacted when it ruled Afghanistan from 1996 to 2001. The Taliban have moderated their rhetoric and some policies, but these changes appear tactical, opportunistic, and easily reversible. As before, the group has removed female judges, barred female lawyers from practicing, and restricted female doctors from treating male patients or female academics from teaching male undergraduates. Girls are routinely denied access to education beyond the sixth grade and even adult women must have a male companion for long-distance travel. The authorities continually harass journalists. Despite pledges of amnesty from the central Taliban leadership, civil servants and soldiers who served in the previous regime have been killed or otherwise persecuted in some localities. Civil society lacks representation in decision-making bodies.

Taliban leaders seem to anticipate that, as with their long-fought military victory, they simply need to stand firm and eventually the international community will recognize their government. Yet, there is no international consensus on what criteria the Taliban would need to meet to proceed even on a path toward recognition. Most foreign governments will remain aloof as long as the Taliban’s internal policies remain essentially repressive, its ties with foreign terrorist groups like al-Qaeda remain indeterminate, and positive incentives for comprehensive international engagement remain so elusive.

Richard Weitz is senior fellow and director of the Center for Political-Military Analysis at Hudson Institute. The views expressed in this piece are his own.