After Afghanistan: What’s next for Pakistan and the US? 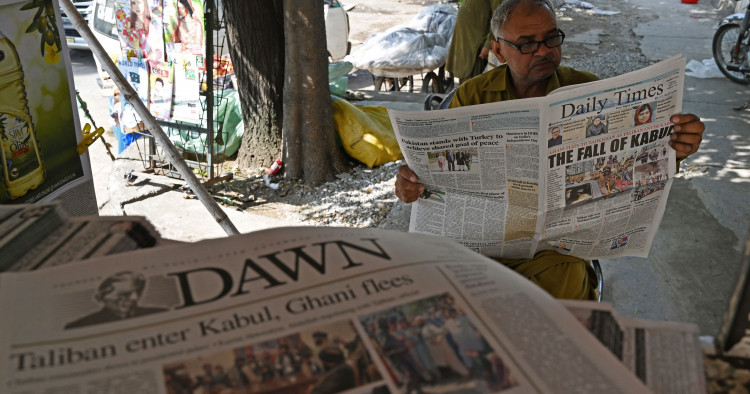 The evacuation crisis precipitated by the Taliban’s swift takeover of Afghanistan following the rapid withdrawal of American troops may further widen the divide between Pakistan and the United States. The Aug. 26 terror attack at Kabul airport claimed by Islamic State-Khorasan Province (ISKP), ISIS’s local affiliate, is a clear manifestation of Washington’s epic defeat in the two-decade-long “war on terror” and a sign that President Joe Biden is losing his grip on the Afghan narrative.

Biden’s Afghanistan policy is a confusing shambles. While it is too early to fully grasp the long-term foreign policy implications of this self-inflicted crisis, it threatens to undermine his domestic agenda, and most of the blame should be put at Pakistan’s doorstep. The awful scenes at Kabul airport only exacerbated the evacuation crisis, jeopardizing Pakistan’s efforts to enter the Biden administration’s good books.

It is obvious that two decades of violent conflict in Afghanistan have bled the U.S. far more than it could handle. Now the Biden administration is facing criticism, and rightly so, for its shockingly mismanaged retreat from Afghanistan. However, it is Pakistan that is largely responsible for many of Washington current predicaments in the country, and one of the main reasons U.S. power and prestige were so badly damaged in Afghanistan is because the Taliban found unassailable sanctuaries in Pakistan.

Strategic prudence demands that now that American troops have completed their exit, the Biden administration should hold Pakistan accountable for its inability to deliver what its generals and diplomats repeatedly promised: politically negotiated peace in Afghanistan. Pakistan’s security establishment is perhaps aware of this looming danger, and that is why National Security Adviser Moeed Yusuf has asked Washington not to treat Pakistan as a “scapegoat,” underlining their shared interest in Afghanistan. Yusuf asserted that he was “not asking for any sympathy for Pakistan,” but talking “in terms of pure U.S. selfish national interests.” Islamabad fears being caught between an embittered Washington and an emboldened Taliban.

Whether the Taliban has fundamentally changed is an open question. Nevertheless, the core proposition on which Washington’s Afghan exit strategy has rested — that it could meet the strategic challenge from a position of strength — was naïve. It is clear that when the Trump administration sent its special envoy to sit across the negotiating table from the Taliban and finally signed the peace agreement in February 2020, the war was already lost. The embarrassing deal was projected as the only way to ensure intra-Afghan negotiations between the Taliban and the U.S.-backed Kabul regime, but it ended up legitimizing the former without securing any concessions.

Pakistan claims to have played the most important role in persuading the Taliban to talk peace. However, it is still waiting to be rewarded — symbolically and materially — for this. A few days before the capture of Kabul, Yusuf vented his frustration over Biden’s reluctance to talk to Pakistani Prime Minister Imran Khan, boasting that Islamabad has “options” if the U.S. believes that a Biden-Khan phone call is a “concession.” But Biden’s cold shoulder to Islamabad is a result of the most shocking loss of American face in recent history; whatever progress Afghanistan had achieved over the past two decades is now being reversed by the Taliban. The absence of any interval between an American withdrawal and the collapse of Kabul only confirms the widely-held perception that the Taliban were merely pretending to talk peace in Doha, a fact of which Pakistani intelligence was surely aware.

Pakistan’s official stance has been that it preferred a politically negotiated outcome in Afghanistan, but nobody believes this. Khan may have further infuriated the U.S. by declaring that Afghanistan has “broken the shackles of slavery.” Does the current situation really look like liberation? Were that the case, Afghans would be celebrating, not desperately trying to get out of their country. What Khan’s schadenfreude essentially means is that America has been forced to surrender before Pakistan’s security establishment.

Despite Washington’s apparent displeasure over Pakistan’s failure to convince the Taliban to peacefully negotiate the terms of the future Afghan government, the Biden administration probably believes that Pakistan will continue to play a critical role in a Taliban-dominated Afghanistan. And many perceived humiliations and setbacks over the years notwithstanding, Pakistan’s ruling elite still values its relationship with the U.S. In the immediate aftermath of the American withdrawal, Pakistan is trying hard to reassert its value to the U.S. But Biden has still not found time to talk to Khan more than seven months after taking office, and Pakistan’s prime minister does not seem amused.

Given the current geopolitical scenario, it is not too difficult to understand what “options” Yusuf was referring to. Without a doubt, China has emerged as Pakistan’s number one option in recent years. Pakistan has also attempted to draw closer to Turkey, supporting the latter’s ambition of assuming the leadership of the Islamic world. Pakistan has taken steps to strengthen its ties with both Russia and Iran as well. However, these relationships don’t seem resilient enough for Pakistan to forge a stable regional security order because Afghanistan’s stability under the Taliban remains highly questionable. As Pervez Hoodbhoy, Pakistan’s noted scholar, rightly points out, “While the Chinese are said to be capable of eating everything that moves, they cannot stomach an unreformed Taliban; this would create hellish indigestion within Xinjiang. Former Taliban allies, Saudi Arabia and UAE, are wary of Taliban radicalism spilling over and wrecking attempts to liberalise their countries.” Renowned Indian journalist Shekhar Gupta perceptively remarks, “Anybody who thinks the Taliban, under the tutelage of the Pakistanis, will be able to secure a nation-state as amorphous as this against highly indoctrinated groups, is erring gravely.” These many contradictions will eventually become too large and complex to be managed in a Taliban-ruled Afghanistan.

Biden remains unconcerned about hurting Khan’s ego, and this probably makes Pakistan’s security establishment somewhat restless. Khan recently received a phone call from Russian President Vladimir Putin in which they discussed the situation in Afghanistan. Though Pakistan’s ties with Russia are on an upward trajectory, Islamabad is aware of the symbolic significance of a phone call from Biden, and U.S. Secretary of State Antony Blinken’s many calls with his Pakistani counterpart, Shah Mahmood Qureshi, and the Putin-Khan conversation are no replacement.

While President Donald Trump publicly expressed his frustrations over Pakistan’s double dealing in Afghanistan before making a U-turn, Biden has remained largely silent on the issue. But this silence can’t be interpreted as a willingness to forgive Pakistan. Will Biden forget that Islamabad exploited American dependence on ground lines of communication through Pakistan? One also can’t rule out the cynical calculation behind Biden’s motive to withdraw from Afghanistan: Pakistan would suffer the consequences of the chaos and vacuum left behind.

Shahid Javed Burki, Pakistan’s former finance minister and a noted columnist, recalled a conversation he had with Gen. Zia ul-Haq in July 1988, weeks before Haq died in a plane crash. Explaining why he dismissed Prime Minister Mohammed Khan Junejo, Burki reports Haq told him, “I took that action because I did not approve of his Afghan policy. He had concluded the ‘Geneva Accord’ which had the Soviet Union withdraw its troops from Afghanistan. I opposed such a move since it would leave a political vacuum in Kabul which would be difficult to fill by the mujahedeen groups who had fought the Soviet Union. I foresee a civil war.” The withdrawal of the Soviet troops eventually led to a civil war in Afghanistan. While Pakistan had little direct hand in the creation of the Taliban, its decision to climb on the bandwagon was borne out of the need to contain the infighting among the mujahedeen. As the Biden administration pushed the exit button, many senior Pakistani officials criticized the U.S. for its hasty withdrawal.

Hopefully, America’s “forever war” has ended. Pakistanis are now becoming increasingly aware of the political vacuum in Kabul. Islamabad seems desperate to make sure that the Taliban’s actions should not give the international community, particularly the U.S., any reason to isolate them diplomatically and cripple them financially. According to scholar Ayesha Siddiqa, Pakistan’s Army chief, Gen. Qamar Javed Bajwa, recently spoke to a private gathering of retired generals, journalists, and diplomats about his concern that Pakistan may end up being targeted by American sanctions. The rush among Pakistani officials to give the Taliban a certificate of good behavior and paint a doomsday scenario of what might happen should international engagement with Pakistan and Afghanistan not continue says less about the Taliban’s transformed character and more about Islamabad’s desperation to whitewash the “military solution” the Taliban imposed.

Despite Russia, China, Iran, and Pakistan wanting to play a role in the new great game in Afghanistan, the U.S. remains the most consequential and decisive actor. And continued instability in Afghanistan is the worst-case scenario for Pakistan. Moreover, it is becoming clear that Pakistan will not be able to separate itself from what happens in Afghanistan. It would be foolish to believe that the American intelligence community is not aware that ISKP was founded by representatives of ISIS, but has drawn its fighting strength from disaffected Taliban commanders and other Sunni sectarian groups once nurtured and later marginalized by Pakistan. Antonio Giustozzi believes that ISKP maintains some kind of relationship with Pakistan’s intelligence services. A U.N. Security Council report from 2020 has drawn attention to tactical coordination between ISKP and the Haqqani Network, which has been an integral part of the Afghan Taliban and was termed a “veritable arm of Pakistan’s ISI” by former Chairman of the Joint Chiefs of Staff Adm. Mike Mullen in 2011. Whether Pakistan likes it or not, the reality is that the world views an unstable Afghanistan as an outcome of Pakistan’s double game. How Pakistan will handle these diplomatic complexities, while also attempting to reset ties with Washington, remains to be seen. The perfect outcome for Pakistan would be to see the Taliban compromising with other political actors and stakeholders in Afghanistan.

A risk-averse Biden does not seem prepared to undertake any major military measures to reverse the setbacks in Afghanistan, including the tragic death of its 13 soldiers. A drone strike or two against ISKP leaders is irrelevant without targeting the terror network created by Rawalpindi. If Washington is expecting Islamabad to influence the Taliban’s state policies and provide counterterrorism cooperation going forward, such expectations are sorely misguided because Pakistan’s security establishment has escaped responsibility for instrumentalizing terrorism under a nuclear umbrella for far too long.

Pakistan not only duped the superpower for almost two decades by playing a double game, but it has been instrumental in orchestrating the rollback of civil liberties and women’s rights in Afghanistan. Washington’s failure to penalize Pakistan would further diminish America’s position as a global power while damaging its credibility among allies. If the U.S. is keen to retain a semblance of credibility on the world stage, there has to be a bipartisan consensus in Washington to act against Pakistan. Now that the evacuation is complete and foreign troops have left Afghanistan, the real test for Pakistan begins. If the Biden administration makes up its mind to take on Pakistan for its deceitful behavior in sustaining the insurgency in Afghanistan, then Pakistan must be ready for unpredictable terms of engagement with Washington.