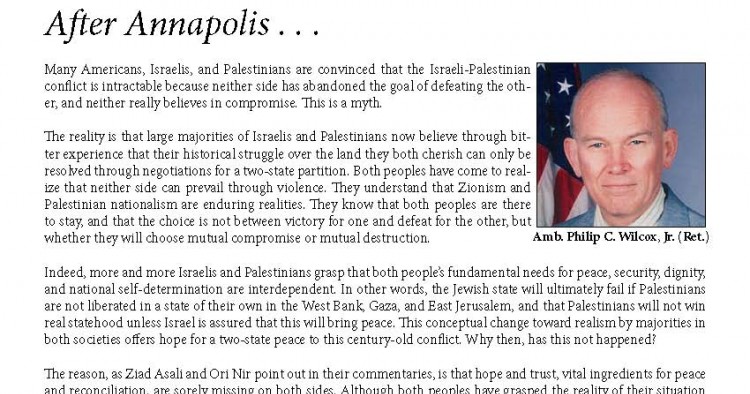 Even the most skeptical of us would have to concede that things are better now than they were a few months ago, as they hasten to add that we have been here before and that this too shall pass.

Yes, things are better: Palestinian and Israeli officials are talking, and not about the weather.  Final status issues are being discussed, though they are not being resolved.

Palestinian security forces are being trained by General Keith Dayton. These forces have already been deployed in Nablus and Tulkarem and have secured a peaceful Christmas in Bethlehem.  Enough law and order in these cities have returned to give their people a sense of hope and a taste of what might be if the present trend continues.

Pledges of $7.4 billion dollars have been made in Paris to rebuild Palestinian institutions and the economy with the stated goal of establishing a Palestinian state.

Nevertheless, astonishingly, settlement expansion continues, checkpoints have not been removed, Qassam rockets are still being fired, Israeli incursions and assassinations go on, and Gazans sink deeper into isolation and suffer economic and social degradation under siege.  Public and private racist discourse still rages —  everywhere.  It is still considered politically risky to ascribe anything but bad motives and nefarious designs to the “enemy,” be he an Arab or a Jew.

How do we keep the momentum for peace going beyond expressing wishes and hopes?

There are governmental policies and steps that need to be implemented and there is a wider sphere of private, institutional, and individual endeavors that have to be undertaken to put this aging monster of a conflict to its final rest:

1. Help build the underpinnings of a Palestinian state on the ground.

A.  A security system that imposes law and order and puts an end to lawlessness in the territory must be implemented and controlled by the Palestinian Authority (PA). The definition of security has to go much further beyond personal safety.  It has to include just and enforceable laws, with an independent judiciary, a functioning court system, and law enforcement agencies, as well as the development and activation of professional disciplined forces that are able to ensure safety and implement the law.  Creation and deployment of such forces under occupation has to be a cooperative, coordinated effort with the Israeli security system.   Without a political road leading to a viable state this effort will inevitably lead to accusations of collaboration, betrayal and a worse outcome than the miserable status quo.

Security has to extend to Gaza as well as the West Bank; the most promising policy proposed to end the deadlock is to turn over the crossings in Gaza to the control of the PA, thereby lifting the siege and boycott.  The Quartet adopted this position at the Paris conference, and  Israel and Hamas have to provide explanations should they oppose it.  The will of the people in Gaza will have to be expressed in free and fair elections to end the Palestinian political impasse.

B. An economic system that balances the immediate needs for jobs and the rebuilding of infrastructure with a sound development plan that aims to build institutions and policies leading to economic viability and independence that will put an end to hand-outs and subsidy.  The PA has put together such a plan for reform and development that was submitted to the Paris Conference.  Pledges that exceeded expectations affirmed the credibility of the Palestinian leadership that submitted the plan.

The private sector, i.e. global institutions, enterprises, and citizens have yet to assert their own role and defend their values as well as their interest in peace and in resolving this conflict.  Much can and should be done to invest in development initially as a peace dividend and ultimately as a capitalist investment with an eye towards returns. The returns on investment in a peaceful Middle East can and should be substantive.  Citizens of every country in the Middle East should benefit from these returns.  Power of the private sector, its reach and its talent, must come into play.  Ithe private sector can be the best expression of the global social responsibility if it helps buttress the economic underpinnings of a peaceful Palestine.  The newly founded US-Palestinian Public Private Partnership chaired by Walter Isaacson is the mechanism created by Secretary Rice to steer this effort.  A Palestinian private sector conference hosting business leaders and global private investors will be held for this purpose in Bethlehem this spring.

2. Defeat defeatism. Cynics on all sides may or may not be wise, but they are hurtful. The worst of them are beneficiaries of a status quo that leaves them privileged and free to utter words with no obligations or sacrifices.  The best have allowed past experiences of failure to foreclose all possibilities of change for a different future. Their attitude in sum serves to extend the dehumanizing and terrible status quo which is leading the Palestinian and Israeli people to catastrophe.  We need to clearly, publicly, and loudly support the stated international goal of the two-state solution.   Indeed an American national alliance with just this goal in mind should be mobilized to include strange bedfellows who agree on achieving a two-state solution no matter their motivation and their agenda.  It will be a national alliance for two viable secure states negotiated between the parties sanctioned and guaranteed by the existing instruments of the international community.

3. Speak up for the silent majority— the less strident, cowed majority that is defensive about being labeled as naïve and unrealistic or even traitorous. This majority refuses to believe that most human beings on “the other side” are evil but remains unwilling or incapable of checking and confronting its own extremists.  A violent young zealot full of sound and fury against the ”Muslims,” “Israelis,” “Jews,” “Arabs” or “Palestinians” needs no more to be “understood and defended” if he is on our side of the aisle than any racist criminal anywhere in the world.  More, much more, public discourse and courage to go against the parameters of political correctness is needed.  The media needs to uphold its own share of social responsibility to highlight the incredible efforts of so many decent people who toil for peace, at least as much as it covers the violent, fuming, or cold-blooded racists and their verbal and physical violence.  There is a story of decency and courage — one that deserves to be told.

4. Abandon, ridicule, and shun all moves that undermine the emergence of a viable state at this point in time. This is the first time that we have a true budding partnership between Palestinian and Israeli leadership.  To undercut this partnership by actions on the ground is to undermine the Palestinian leadership of Mahmud ‘Abbas and Salam Fayyad and boost their known political opposition.  Settlements must freeze, not just to leave room for a Palestinian state, but to retain the political viability of the present Palestinian leadership. Israel has a clear cut choice of dealing with a leadership that is committed to negotiate a two state solution or having to contend with one that refuses to recognize Israel.  Decisions made by Israel to support or withhold support from those who are trying to build a new Palestine will have existential consequences for both peoples.

The two peoples can gradually, and by choice, become normal citizens of normal nations, or they can descend further into their tribal, feudal conflict over grazing grounds and continue to fight over metaphysical symbols and their baggage of glory and suffering.  Now is the time to help sustain the momentum toward peace.