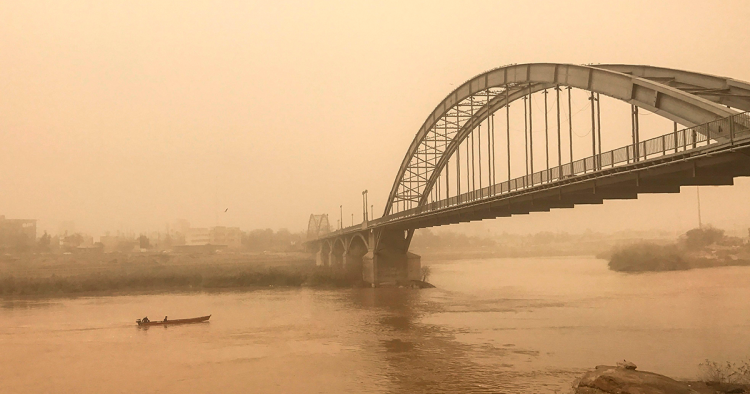 Water is slowly emerging as yet another potential cause for dispute between Ankara and Tehran. As of late, the two neighboring states have been at loggerheads over a number of issues, including Syria and Iraq, where they have opposing interests. After years of quiet diplomatic juggling, the issue of transboundary water management is gradually taking center stage in the two countries’ relations, a development that could, in the medium run, have serious repercussions for regional security, not least because Tehran has started to frame it in national security terms.

Last month, for instance, Iranian Foreign Minister Hossein Amirabdollahian and a number of Iranian MPs blamed Ankara’s ambitious dam-building projects for increased drought in Iraq and Syria and more frequent dust storms in Iran, calling Turkey’s approach “unacceptable.” Turkey, for its part, refuted the Iranian claims as unscientific and instead accused Iranian policymakers of trying to turn Turkey into a scapegoat to deflect public attention away from the regime’s own dire mismanagement of the country’s water resources.

At the heart of the issue is Turkey’s multibillion-dollar Southeast Anatolia Project, which has been in the making for the past five decades. Led by the government-owned State Hydraulic Works, the project includes 22 dams and 19 hydropower plants on the Tigris and Euphrates rivers that have caused severe drought in large parts of Syria and Iraq. Viewed from Tehran, however, it is the Ilisu Dam on the Tigris River that poses the most acute environmental threat to its resource-rich yet highly impoverished southern and western provinces. According to Iranian officials, the recent uptick in dust storms in these regions is the direct result of reduced water flows in the Tigris and subsequent droughts in Iraq caused by the Ilisu Dam.

Although Turkey and Iran hold regular meetings to jointly monitor water flow from the former to the latter, a practice that has its roots in their bilateral agreement dating back to 1955, one should not discount the likelihood of prolonged contestation between the two regional heavyweights over the issue of water in the coming years. Of paramount importance is the fact that the interests of four sovereign nations are at stake, and thus bilateral arrangements will only have limited utility. This issue is made even more pressing as Turkey, unlike the other three countries, is not a signatory to the 1997 New York Convention on the non-navigational use of transboundary waters, meaning there is no foundation for the development of a multilateral approach.

Even if Ankara were bound by an international convention, it is not at all clear how successful Tehran would be in generating support for its position given its status as a pariah on the global stage. Nor are Iraq and Syria capable of exerting any meaningful pressure on Turkey to address their concerns over its aggressive dam-building projects and its broader approach to water management. The Syrian government is still preoccupied with the ongoing civil war while political instability in Iraq, and Turkey’s own influence over some political constituencies in the country, severely limit Baghdad’s ability to demand policy changes from Ankara. In fact, some Iranian analysts argue that Turkey has taken advantage of Iraq’s weakness in recent years by accelerating its dam-building efforts, knowing full well that the government in Baghdad will not be able challenge Ankara as long as it remains preoccupied with recurring rounds of political crisis and turmoil.

Taken together, all of this leaves Iran with no option but to expand its bilateral arrangements with Turkey while simultaneously taking the lead on developing a joint approach with Iraq and Syria to exert collective pressure on Turkey. To be sure, there is no shortage of reasons for the trio to be keen on pursuing such an initiative. Dust storms endanger public health and necessitate the full shutdown of cities and businesses, harming economic productivity, while droughts directly reduce crop cultivation, negatively impacting the agricultural sector and weakening food security.

As the three countries embark upon this effort, however, they are likely to get entangled with the broader dynamics of Iran-Turkey strategic competition in the region. This, in turn, will only further complicate an already complex and dire situation. A look at Iran and Turkey’s water management dossiers reveals that their views on water resources are full of realpolitik language. They consider their ability to control the flow of water as an instrument of power and influence — one that can complement their grand strategies to become the leading player in their neighborhood. Therefore, Iran’s attempts at alliance building will almost certainly be perceived as an opportunistic endeavor aimed at clipping Turkey’s wings and reducing its influence in the region.

Already, some Turkish analysts have linked the water dispute with an increasing influx of Afghan refugees, accusing Tehran of trying to weaponize immigration to extract concessions from Ankara. Turkey is also likely to highlight Iran’s own dam building as a cause of drought in order to cast doubt on the sincerity of Tehran’s claims that it is seeking a win-win outcome for all parties. Doing so would be particularly easy in Iraq given that both Baghdad and Erbil have already made numerous complaints about Iran’s efforts to divert tributaries of the Tigris at their expense.

As Iraq and Iran prepare for another week of dust storms, one can be certain that the issue of transboundary water management will dominate relations between Iran and Turkey in the years to come. While the two states are likely to continue their bilateral efforts and expand the mandate of their established working groups, it is not at all certain if such efforts will lead to any meaningful result when it comes to addressing the root causes of the dispute. For that to happen, Iraq and Syria must be invited to participate, but as yet there is no sign of any move in that direction. More importantly, Ankara and Tehran need to opt for responsible statesmanship and avoid issuing emotional or rhetorical statements. Unfortunately, there seems to be little appetite for pragmatism at the moment as populist politics benefit the two governments, helping to galvanize nationalist sentiment and distract the public from the worsening economic situation in both countries. For Turkey’s ruling party, in particular, this would come in handy in an election year.

For its part, the United States government needs to pay close attention to the ongoing Iranian-Turkish tussle and treat it as an opportunity for developing and fine-tuning its approach toward the climate change-regional security nexus in the Middle East. On a bureaucratic level, the Departments of State and Defense need to set up a task force embedded within U.S. embassies and charged with establishing contacts and working with local and regional stakeholders to develop relevant frameworks to prevent disputes and manage water resources on the national and regional levels. To this end, it is prudent to be mindful of the significance of water management as a means for direct engagement with Tehran outside of the context of the Joint Comprehensive Plan of Action.

The U.S. government also needs to work with its allies and partners to set up regional bodies that can serve as a forum for discussions on environmental issues to prevent any one country from weaponizing water. Doing so will not be easy, but failure will certainly cost the U.S. more. According to the National Intelligence Council’s latest report, water shortages and environmental crises are likely to lead to armed conflicts in the Middle East, frustrating the U.S.’s goal of reducing its military footprint in the region.

Equally significant, failure could also cost the United States a great deal of strategic, diplomatic, and commercial influence in the region as Beijing might very well seek to fill the leadership vacuum. Speculation is rife that China is exploring the idea of setting up a collective governance body in the Horn of Africa aimed at, among other things, providing a venue for collective deliberation on the political and economic implications of an environmentally induced crisis, such as increased drought and water shortages. Beijing could very well do something similar in the Middle East too. Above all, however, Washington’s indifference toward the looming environmental crisis in the Middle East could have serious repercussions for its technological rivalry with China. Technologies like AI and smart infrastructure are set to play a key role in shaping states’ understanding of the effects of climate change as well as preventive efforts, and therefore passive engagement with regional actors could further boost China’s status as the region’s leading technology supplier and partner of choice.

Nima Khorrami is a research associate at the OSCE Academy in Bishkek and the Arctic Institute in Washington, DC.