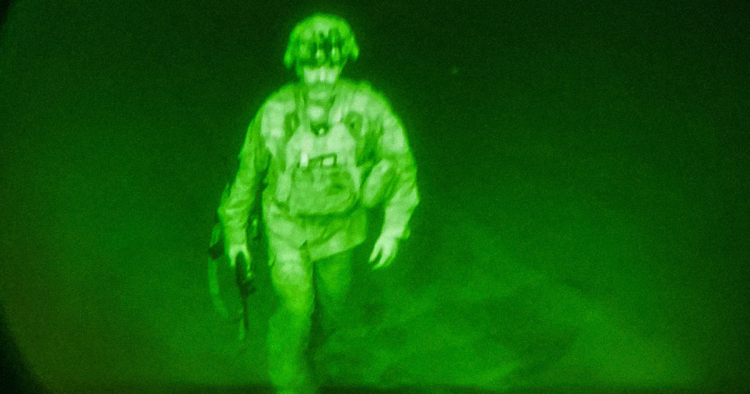 On Aug. 30, 2021, the commander of the 82nd Airborne Division, Maj. Gen. Chris Donahue, boarded the last U.S. military flight out of Hamid Karzai International Airport in Kabul, Afghanistan. For many, the image of the final American soldier stepping onto a C-17 military transport plane marked the end of the war. But even as we remember the chaotic end of America’s longest war, the seizure of power by our erstwhile Taliban foe, the desperate evacuation we all witnessed at Kabul airport, and the terrorist attack at Abbey Gate that claimed the lives of 11 U.S. Marines, a Navy Corpsman, an Army Special Operations soldier, and more than 100 innocent Afghans, we should also recall the sublime acts of loyalty and resolve that took place simultaneously.

First, let’s remember the herculean effort of U.S. service members to carry out this operation despite countless obstacles and a situation on the ground that deteriorated quicker than most imagined. Their balance of humanity and tenacity in those final days is something to be admired and lifted up as an example of American success, even if the decision to leave Afghanistan without any residual forces, which made a fraught situation even worse, was not.

We should also remember the volunteer effort to rescue and evacuate American citizens and our Afghan partners, who, having been promised our support, had worked and fought alongside us for two decades. Initially organized by groups of former military, intelligence, and diplomatic personnel seeking to save their former colleagues, this operation quickly grew into a substantial international movement that saved hundreds from certain death at the hands of vengeful Taliban. Funded by private donations and carried out by volunteers who often dropped what they were doing to offer their time and expertise, these actions sought to make good on the promises their countries made to thousands of loyal Afghans who trusted in those promises.

Finally, we should remember the critical assistance given to Americans and Afghans by our key partners in the region. A number of countries throughout the Middle East host the U.S. military, including Qatar, Saudi Arabia, Kuwait, and Bahrain. In multiple ways, they and others all play a critical role in supporting U.S. national security interests — and each of them helped in our hour of need last August. Some fail to appreciate that without these key partnerships, our military operations in the region would be exceedingly difficult, if not altogether impossible. No better example exists than al-Udeid air base in Qatar.

During last August’s final evacuation from Kabul, al-Udeid demonstrated its value when over half of the 124,000 people flown out of Afghanistan transited through the airbase, and almost 60,000 Afghans were given refuge there and humanitarian support provided by Qatar’s government. Even today, it continues to serve as a critical hub for pursuing America’s “over the horizon” counter-terrorism operations, exhibited most recently by the killing of al-Qaeda leader Ayman al-Zawahiri.

The U.S. has rightly focused on competition with great powers in Europe and the Pacific. But treating stability in the Middle East as a peripheral concern, separate from higher national security interests, poses considerable risk. China and Russia have substantially increased their presence and activities in this region. The U.S. must be prepared to compete with them in the Middle East over the long term, acknowledging that strategic withdrawals from the region create vacuums, which only entices competitors to fill the void and erodes our partners’ confidence in American resolve. The future policy, therefore, should be centered on sustaining regional partnerships and allies. Not only do they host our military bases, but they also share a collective vision of stability in the region. Maintaining deeply-rooted, ironclad ties in the region serves as a hedge against Iranian hegemony and a counterbalance to Russian and Chinese activities.

America and our partners sought a better future for Afghanistan and its people. That massive endeavor is not over, even though, for now, Afghanistan struggles under the brutality of Taliban rule. Learning to accept this reality will be easier if we pause to reflect on the transcendent sacrifices of those who served loyally and faithfully in Afghanistan, those who came together to honor an obligation to our Afghan partners in those final days, and the enduring value of our partner countries in the region.

Mick Mulroy, a former Deputy Assistant Secretary of Defense for the Middle East, a retired CIA officer and U.S. Marine, an ABC News analyst, a volunteer for Team America Relief and FamilUSA (organizations that worked to evacuate our Afghan partners), and a veteran of the Afghanistan War. The views expressed in this piece are their own.