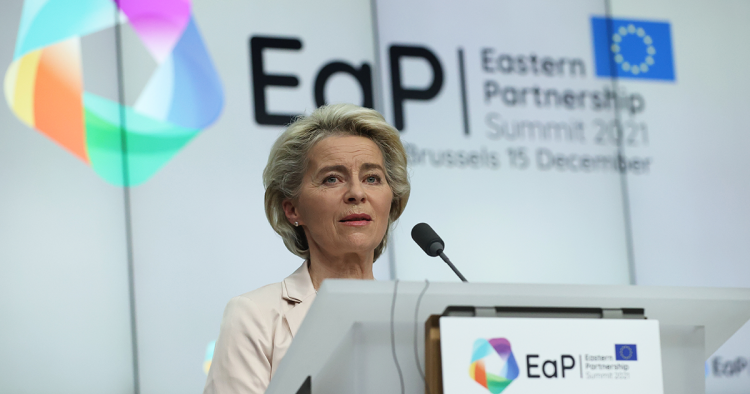 Last week, one day before the European Council, the sixth Eastern Partnership summit took place. For weeks, questions about a potential Russian invasion of Ukraine have been asked around the world. But the Eastern Partnership summit declaration, signed by Ukraine, Georgia, Moldova, Armenia, and Azerbaijan, includes no mention of Russia. The Partnership appears hesitant to commit to more security (or integration), perhaps because some members were hoping for a greater European Union commitment to Black Sea security.

A major accomplishment for the Black Sea region in 2021 was the Association Trio of Georgia, Moldova, and Ukraine, a vehicle to improve cooperation and coordination between the three countries (which signed the Association Agreement years ago) and the European Union. They rallied forces to speed up their integration, and the European Union belatedly “acknowledged” the Association Trio and promised a “streamlined architecture for multilateral cooperation” (read: differentiation) with Eastern Partnership members, but no more.

What this means concretely is that the Union seems to be shifting this problem to the bureaucratic level. EU membership was not on the table at the sixth Eastern Partnership summit, and the Partnership Declaration reads as if integration is merely a bureaucratic procedure in the hands of the countries that want to accede. This, of course, is not the case. What is not apparent in the Declaration is the continued lack of political will among EU member states to open the door for new members.

In the absence of political progress, the EU promises funding: €2.3 billion for regional investment and the potential of €17 billion in public and private investment. The areas of investment and enhanced cooperation primarily cover digital and physical connectivity. This economic pledge overlaps with the EU’s new Global Gateway (€300 billion) and with the much smaller, U.S.-supported Three Seas Initiative (that excludes Eastern Partnership countries). These three pledges have two things in common: infrastructure investment and strategic competition with China.

Eastern Partnership members welcomed more EU funding, as infrastructure is a major issue in the former Soviet Union. But Russia, not China, is the main problem in the Black Sea region, and the Partnership does not even mention this threat. This situation raises a vital question for the EU member states: Is the Black Sea European? If so, then the Union would have to take security measures against Russian aggression in the region. But last week’s European Council meeting only included the threat of vague economic consequences if Russia should further invade Ukraine.

Although the Eastern Partnership summit was disappointing for the Association Trio, it is not too late for the Union to bring Western security to the Black Sea region and the Trio. The possibilities are endless. Russia and its proxies have been successful in “borderization” (the movement of the border between Georgia and Russian-occupied territories through border marks and fencing) because the EU Monitoring Mission has a very limited mandate that enables only monitoring of borderization. The EU can easily change the mission’s mandate to a more active role that would prevent further borderization. Brussels could also establish a monitoring mission to ensure stabilization of the Caucasus in the aftermath of the 2020 Nagorno Karabakh conflict. The 2020 conflict outcome meant new borders were drawn with the West standing by, and Russia deployed yet another troop contingent (“peacekeepers”) on foreign ground. The EU should step up its presence in the Caucasus with at least a monitoring mission to ensure stability and Western influence. The EU Advisory Mission to Ukraine could be expanded to include monitoring of the border between Ukraine’s occupied territories and Russia. EU assistance for security and defense could be expanded in funding and scope, as requested by Eastern Partnership members.

The calls of the Eastern Partnership members, and particularly the Association Trio, for more active EU engagement in the Black Sea region are louder than ever. The EU has taken measures, mainly through financial assistance, to counter Russian aggression in different forms. But security is the most urgent problem for the region and its democracies, and Russian aggression is an attack on Western values and influence, which are increasing through the Eastern Partnership. The world must never forget Russia’s invasion of Ukraine in 2014, when Ukrainians took to the streets so that their country would sign the Association Agreement with the European Union. With Russia’s threatening buildup at the Ukrainian border, it is time for the Union’s member states to take decisive measures to protect their eastern neighbors.

lulia Sabina-Joja is a senior fellow with MEI’s Frontier Europe Initiative, the director of the Afghanistan Watch project, and an adjunct professor at Georgetown University. The views expressed in this piece are her own.