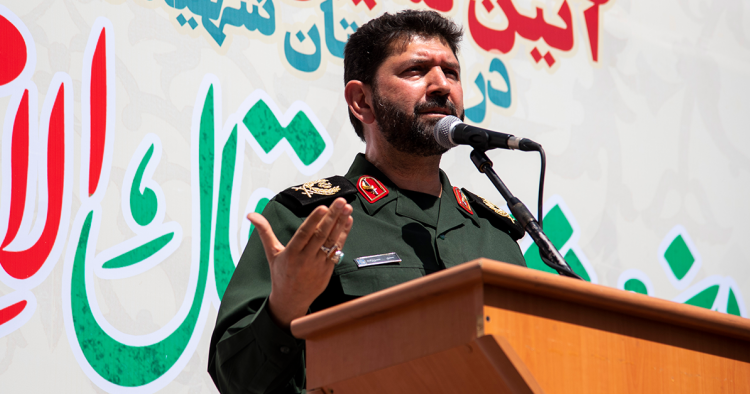 This is the first part of a two-part series. The second part is available here.

Tehran’s policy toward the Afghan Taliban has created new clashes within Iranian government circles. These clashes recently escalated as influential hard-line media and associates of the Islamic Revolutionary Guard Corps (IRGC) made public efforts to portray the Taliban in a positive light.

In one of the most controversial cases, the newspaper Kayhan, whose director is appointed by Iran’s supreme leader, wrote on June 25 that the existing Taliban “is different from the Taliban we knew before, and beheaded people.” Kayhan claimed that in the group's recent advance in Afghanistan, “there are no reports of horrific crimes similar to those of ISIS in Iraq,” and that the Taliban “have even stated that they won’t harm the country's Shiites.”

In a similar statement on June 26, a senior director of the Tasnim news agency, affiliated with the IRGC, stressed on a television program, “It should not be perceived that Shiites are being killed in Afghanistan ... there is no war between Shiites and the Taliban.” Hessam Razavi, head of Tasnim’s foreign offices, went on to criticize Afghan Shiites’ battle with the Taliban, calling it “in line with U.S. interests.” In an exclusive interview on June 24 with Taliban Spokesman Zabihullah Mujahid, Tasnim highlighted his remarks that the group “will assure Shiites that no discriminatory action will be taken against them.”

Then on July 6, an IRGC-affiliated newspaper, Javan, dedicated its front page to a big photo of Taliban fighters with the following headline: “Taliban: We Have Been Reformed.” “The group is reformed, its leaders are more mature, do not seek military occupation of Kabul, the capital of Afghanistan, and will no longer harm diplomats and foreign civilians," the newspaper reported, quoting Taliban officials.

However, the hard-line media's outspoken support for the Taliban was soon met with numerous reactions within Iranian government circles, which clearly indicated deep differences over the issue.

These reactions intensified after Taliban forces advanced toward Iran's eastern borders. On July 8, they captured the border town of Islam Qala in Herat Province, and videos were released of Taliban fighters standing alongside Iranian border guards. A few days later, Gen. Abdolrahim Mousavi, commander-in-chief of Iran’s regular army, the Artesh, visited the Iranian-Afghan border and warned, "Our armed forces are always ready to face any major threat."

Given the change in circumstances, even the Kayhan newspaper, in its July 10 editorial on the Taliban, adopted a completely different position from its stance just two weeks earlier. “The Islamic Republic of Iran will not allow the slightest aggression to its borders,” Sadullah Zarei, a figure close to the supreme leader's office, argued. He said that “the Taliban's method of using force to seize control of Afghanistan has raised concerns about “the future of the Shiites and our country's borders.”

At the same time, a journalist close to the administration of outgoing President Hassan Rouhani reported some authorities had advised certain media outlets not to “polish the Taliban’s image." The journalist Sara Masoumi did not elaborate on which authorities had taken this position. However, Iran's Supreme National Security Council, which includes the heads of the three branches of the government as well as other senior political, security, and military officials, is usually responsible for communicating with the media on security issues.

The growing concern over the Taliban, however, has not just resulted from their potential threat to Iran's eastern borders; in certain cases, religious factors are also at play. Some Shiite clerics have recently expressed concern over the Taliban's ant-Shiite actions in Afghanistan and the Islamic Republic’s approach to this Sunni jihadi group.

In one of the most outspoken remarks, Ayatollah Lotfollah Safi Golpaygani, an influential grand ayatollah, issued a statement on July 15: “Trusting a group [the Taliban] with such a clear history of evil and murderous acts will be a great and irreparable mistake.” Addressing the international community and the "Government of the Islamic Republic of Iran," the Qom-based grand ayatollah warned that if they remain silent against the Taliban, they will regret it in the future.

The new rapprochement with the Taliban has clearly disappointed some members of the Fatemiyoun Division, an Afghan Shiite militia force affiliated with the IRGC. The Quds Force, the IRGC’s extraterritorial branch, organized the militia during the Syrian civil war to fight alongside Assad regime forces. Given the close ties between the Quds Force and the Taliban in recent years, the Islamic Republic has so far shown no inclination to use the Fatemiyoun Division to defend the Shiite population in Afghanistan. Nevertheless, according to some media reports, a group of Fatemiyoun members have volunteered to fight the Taliban.

Zuhair Mujahid, the cultural director of the Fatemiyoun Division, is reportedly one of these volunteers. In an interview on July 15, he criticized those who “have made a strategic mistake to put all their eggs in the Taliban’s basket and to polish their image.” He blamed the defenders of the Taliban for ignoring the “blood of the martyrs of thousands of Afghan Shiites” in order to collaborate with this group.

In an unprecedented reaction on July 20, the Fatemiyoun Division issued an official statement to blame the “American-Zionist media“ for reporting that the army’s members were present on the battlefields of Afghanistan. “Those who take this path, willingly or unwillingly, are playing in the enemy’s field,” the statement indicated.

In the same statement, the Fatemiyoun Division stressed on its commitment to “following Ayatollah Khamenei's orders,” which implied that the supreme leader’s policy was that the Fatemiyoun should not clash with Taliban forces.

The Fatemiyoun position was clearly in line with Ayatollah Ali Khamenei’s remarks the day before, calling on the Afghan people “to be vigilant against the U.S.," without mentioning the actions of Taliban forces against the Shiite population. In his July 19 remarks, Iran’s leader described the withdrawal of U.S. troops as the “humiliation of America in Afghanistan.”