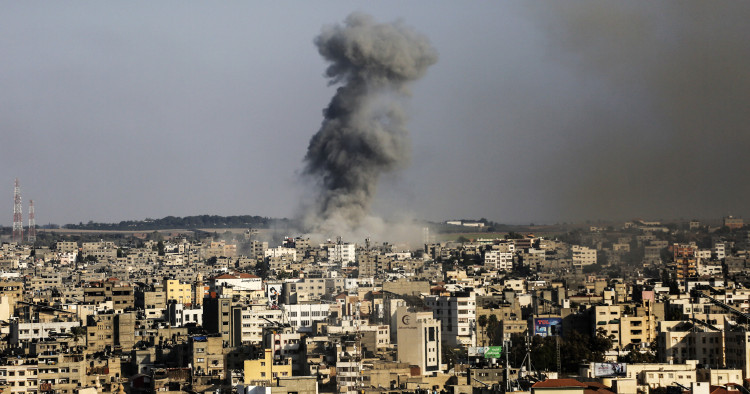 On Aug. 1, a short video circulated on social media showing Bassam al-Saadi, a 62-year-old Palestinian Islamic Jihad (PIJ) leader from the Jenin refugee camp in the West Bank, being dragged along the ground by Israeli soldiers, with traces of blood on the floor and a police dog biting him. The footage raised suspicions that he might have been killed. But before Israel published photos confirming that he was alive, the PIJ in Gaza threatened to retaliate. Al-Saadi is a major figure within the PIJ who led the negotiations between different Palestinian factions in Jenin leading to the formation of a joint operations room in the camp. He also financed the armed resistance inside the camp, according to Israeli sources.

Citing “intelligence information” of an imminent “anti-armor missile” attack by the PIJ, Israel then imposed a closure on Israeli towns adjacent to the Gaza Strip. Accepting the closure would mean granting the PIJ a propaganda victory, even without the latter group carrying out an attack. Nor would Israel accept the PIJ’s attempt to link events in Gaza to the West Bank. Israel, therefore, chose to take the initiative by striking at the Palestinian militant movement.

Motives of all sides

The Israeli offensive in Gaza began on Aug. 5 with the assassination of a high-ranking commander of the al-Quds Brigades, the PIJ’s military wing, and continued for two and a half days (55 hours). The al-Quds Brigades and other armed factions responded by firing nearly 1,000 homemade rockets at Israeli towns near Gaza. Hamas, which effectively governs the strip, did not intervene militarily. In total, 47 Palestinians were killed, including a second al-Quds Brigades commander along with 15 children and 4 women.

The PIJ’s motives for intensifying the pressure seemed clear, given the name it chose for this round of escalation: “Unity of the Arenas.” Viewing Israel’s actions in Jenin as an attempt to eliminate armed resistance in the West Bank, the movement concluded that urgent action was necessary to demonstrate to Israel that attacking the West Bank would be costly and could also open up other fronts.

As for Israeli motives, they went well beyond neutralizing a tactical threat and protecting the residents of the so-called Gaza envelope — populated areas of Israel within 7 kilometers of the Gaza border — from a supposed attack. They also included:

Marketing battle-proven weapons: High-ranking Israeli military sources boasted about using two new weapons to assassinate al-Jabari, whose apartment unit was destroyed without significant damage inflicted to the surrounding building and its other residents.

With regard to Hamas’s decisions not to join in the escalation, there are several reasons for this, foremost of which was its assessment that Palestinian public opinion in Gaza was opposed to another protracted war. In addition, Hamas, which is aware of its responsibility as the ruling authority for the welfare of the population, concluded that the reasons to join the battle — i.e., to defend the PIJ — were not as strong as those dictating hostilities in May 2021, following Israel’s raid on the al-Aqsa Mosque.

Consequences for the Hamas-PIJ relationship

The latest attack highlighted how dangerous the ongoing lack of a unified vision, strategy, and leadership is for the Palestinians. The PIJ fought this battle alone without the direct intervention of Hamas. Meanwhile, no one asked about the absence of the Palestinian Authority because its absence has become familiar.

Although leaving the PIJ alone in the battle certainly affected the relationship between the two factions, there is little doubt that the military wing of Hamas was a participant in the conflict, albeit in a cautious and unannounced manner. The PIJ could not have mounted the operation without a green light from Hamas. Moreover, field leaks and Israeli reports reveal a Hamas security “fingerprint” throughout the escalation.

At a Tehran press conference following the ceasefire, PIJ head Ziyad al-Nakhala insisted that Israel’s attempt to divide Hamas and the PIJ had not succeeded, describing Hamas as the “backbone of the resistance,” adding, “we are in a continuous alliance with it to confront the enemy, and we will remain united with all other resistance forces.”

On the other hand, the heavy blow Israel dealt PIJ in a confrontation that Hamas did not approve of may prove a harsh lesson for the group. Namely, the latest incident could ultimately end up strengthening Hamas’s control over the resistance in Gaza and bolstering its ability to keep the PIJ in line.

Hamas’s decision to act “responsibly” and prevent further escalation could attest to its willingness to enter into a long-term truce with Israel in order to work to improve the welfare of the residents of Gaza, allow international reconstruction aid, and perhaps even conclude a prisoner swap.

The popularity of the PIJ declined inside Gaza and rose outside

There was widespread popular resentment in Gaza at the idea of such a major ​escalation in response to an arrest in the West Bank, which are an almost daily occurrence there. Since 1967, a million Palestinians have gone to Israeli prisons. Escalation whenever someone is taken into custody would be more costly than Gaza can endure.

Gazans had no interest in another military confrontation, especially coming only 15 months since the last Israeli attack on their enclave, which had inflicted great human and material losses. Rather, Palestinians in Gaza would prefer to preserve the few gains they obtained since then, mainly the 15,000 Israeli work permits and other facilitations. The repeated failed rocket launches that caused a number of Palestinian casualties only added to popular resentment and frustration. At the same time, the absence of an effective media campaign by the PIJ to motivate or convince public opinion in Gaza seriously dented its standing during the August 2022 escalation.

Yet while the PIJ’s popularity in Gaza declined, its profile in the West Bank actually rose, in part for attempting to link Gaza to the West Bank but also for its willingness to stand up to Israel, despite taking severe hits, and for doing so alone. In addition to demonstrating its resolve, the PIJ managed to showcase its institutional capabilities. After the killing of two senior military leaders, the commander of the Southern Region of the Gaza Strip and the commander of the Missile Unit, the PIJ increased its firepower, demonstrating that its military action was sufficiently organized and institutionalized to withstand the loss of more than one commander.

Israel’s offensive achieved several strategic and tactical goals — though not all. It succeeded in dealing a severe, though not necessarily decisive, blow to the PIJ. Prime Minister Lapid succeeded in winning a card that may increase his chances in the upcoming elections. But in terms of keeping the Gaza and West Bank fronts separated and the resistance factions divided, Israel was not able to achieve a significant breakthrough. Despite the loss of trust and harm done to the relationship between Hamas and the PIJ, the leaders of both movements have made clear that they will continue to coordinate and cooperate closely.

Still, going forward, the PIJ will have to reevaluate its strategy, including the need to restore its standing inside the Gaza Strip and repair its relationship with Hamas, both of which will take time. Meanwhile, the group will also need to take into account Israel’s policy of expanded economic incentives and opportunities, which is designed to push Hamas to act as a government rather than as a military resistance movement — a transformation that goes against the militant PIJ’s interests.

Omar Shaban is the founder and director of PalThink for Strategic Studies and an analyst on the political economy of the Middle East. The views expressed in this piece are his own.