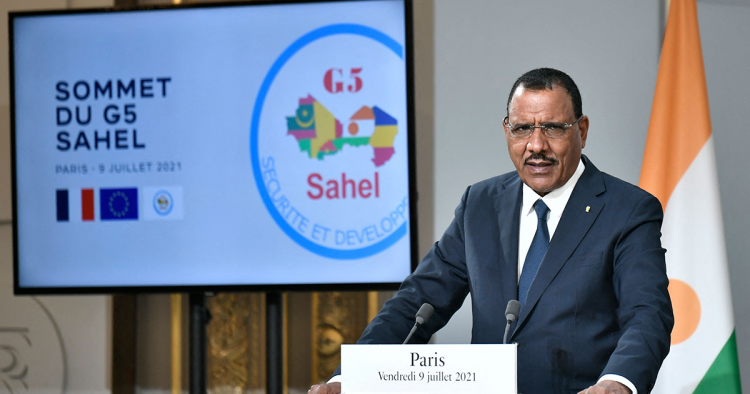 The Sahel reveals a lot about how Africa has become an area of competition between world powers with different foreign policy priorities, as they vie for greater political, military, and economic influence on the continent. Their conflicting agendas are affecting the Sahel, as reflected in a series of high-level forums and summits that address the region’s longstanding challenges but fail to acknowledge the essential role of African countries in responding to them.

A major arena of geo-economic and geopolitical contestation, the Sahel presents both challenges and opportunities for many traditional and emerging players. With nearly two-thirds of its population under the age of 25, the region is one of the youngest in the world, and its human capital is becoming the most important characteristic of its global profile. It also has abundant natural resources and great potential for renewable energy. As a result of these and other converging dynamics, the allure of the Sahel is intensifying the strategic rivalry between the West, Russia, China, and ambitious regional actors like Turkey.

After announcing a major re-evaluation of its security engagement in the Sahel through the gradual drawdown of its Operation Barkhane force, France now seems to be backtracking in light of recent developments. A definitive withdrawal of French forces is unlikely, due to an upsurge in jihadist attacks and the appearance of a new foreign rival in the region, Russia, which is seeking to benefit from a growing anti-French attitude among Malians and the ruling junta’s search for new security partners. Anxious about Russia’s potential increasing involvement in Mali through the Wagner Group, a Russian private military company, France has advanced a new strategy for the Sahel via the Takuba Task Force. Through this multilateral military mechanism, to be based in Niamey, the capital of Niger, Paris seeks to maintain the upper hand in Sahelian affairs, but this has prompted concerns by some European partners over what they see as French-dominated plans.

The rise of new actors

Russia’s growing presence in the Sahel has sparked widespread criticism and worry in Europe, as it represents the beginning of a non-traditional security engagement in a traditional sphere of European influence. Russia's efforts to anchor itself in an area where France has long been active are part of a broader strategy to strengthen Moscow’s global influence by leading a campaign against long-standing power networks in the region. The Kremlin is taking advantage of declining Western leadership in Africa, especially in the context of growing mistrust of French policy among the peoples of the Sahel. The Malian junta, for instance, has shown interest in diversifying its partnerships, notably with Russia, through the deployment of Wagner Group mercenaries. For Russian President Vladimir Putin, this is a good opportunity to project an image of a strong leader who can weigh in on international crises and create an additional area of maneuverability and a bargaining chip as Moscow competes with rivals in Libya, Syria, and elsewhere.

China is another example of power projection in the Sahel, as it taps into Africa’s thirst for development to serve its leadership ambitions. Beijing learned its lesson from the Libyan crisis in 2011, leaving it no choice but to refashion its presence in Africa, including in the Sahel. As a result, the scope of its military engagement has grown in conjunction with the Belt and Road Initiative (BRI) launched in 2013, which advances Chinese economic and strategic interests and offers an alternative to the prescriptive and hegemonic strategies of the Western bloc. Departing from its previous low-profile approach, China seeks a rebirth on the world stage through a new model of international engagement, within which the Sahel is just one among many areas of attention. Beijing goes to great lengths to promote its security model in the Sahel as defensive and collaborative, focusing on training in counterterrorism and infrastructure protection in its cooperation with Chad, Niger, Burkina Faso, and Mali, where its combat contingent in the U.N.’s Multidimensional Integrated Stabilization Mission in Mali (MINUSMA) protects Chinese and foreign personnel as well as critical infrastructure.

Seeking to increase its geopolitical gains in Africa through soft power, Turkey’s foreign policy in the Sahel relies on a common religious identity and cultural resources, in order to expand its economic activity, reinforce its presence, and engage in bilateral security cooperation with Sahelian countries. It has combined assertive diplomatic and economic efforts in the Sahel countries, by providing financial and political support to multilateral initiatives like the G5 bloc, launching direct Turkish Airlines flights, investing in infrastructure, and laying a foundation for new routes to regional markets. This relentless pursuit of trade expansion also uses humanitarian and educational projects to exert soft power influence, in addition to establishing close military cooperation with countries like Niger. However, blamed for encouraging anti-France attitudes and for its ideology-driven foreign policy, Ankara’s role in the Sahel has caused discontent in Europe as well as among UAE-allied African countries. Turkey’s growing role risks bringing Middle Eastern conflicts to the region and pushing the Gulf countries to enter the fray, which could exacerbate the situation and potentially destabilize the Sahel unless the normalization efforts between the so-called Arab Quartet (the UAE, Saudi Arabia, Egypt, and Bahrain) and Turkey/Qatar succeed.

The role of the US

Reasserting U.S. global leadership is a top priority for the Biden administration, and there seems to be more focus on strategic repositioning in an international landscape marked by fierce competition between the great powers in Africa. Joe Biden wants to improve U.S.-Africa relations after Donald Trump’s policy missteps in many countries, especially in the Sahel. However, viewing the Sahel’s significance only through the prism of rivalry with Beijing or Moscow is misguided and a fundamental flaw of Washington’s diplomatic engagement in the region. Furthermore, U.S.-backed counterterrorism operations by French forces in the region have caused numerous civilian casualties and widespread human rights violations — without achieving the goals of these military strikes. Limiting its involvement to intelligence and logistical support for the French Barkhane forces suggests that the U.S. was unwilling to take on a more active role as long as vital American interests were not threatened.

The creation of a U.S. special envoy role for the Sahel in 2020 showed a recognition of the multifaceted and overlapping challenges facing the Sahel countries, including extreme poverty, vulnerable and marginalized populations, separatist movements, and illicit transnational networks. This special envoy, whose role is to “engage actively in support of governance, political liberalization, economic growth and development to achieve long-term peace and stability in the region,” should consider a paradigm shift in addressing security crises in the Sahel. There should be a radical departure from the rhetoric of rivalry in the U.S. administration when talking about Africa. Efforts to stem Russia and China’s influence should focus on constructive initiatives — such as the $152 million in aid provided for the Sahel in 2020 for food, drinking water, shelter, health care, and jobs — not paternalistic stances.

Also, Europe and Washington should understand how existing connections between North Africa and the Sahel nurture the ambitions of Russia and China. As a case in point, the mounting tensions between Algeria and Morocco might allow Russia to advance its efforts in the region, with Algiers possibly serving as one of Moscow’s proxies in Mali, potentially in return for support for Algeria’s position in the Western Sahara conflict.

In a region where insecurity is deep-seated and inequalities are glaring, conflicting agendas are more likely to escalate tensions. The Sahel needs strong and coordinated responses to the persistent injustices. Blaming underdevelopment or the lack of security on the Sahelians cannot acquit Europeans of their responsibility to remedy these injustices — especially while they extract natural resources from the region. Countries in the Sahel are increasingly saddled with debt and must use their resources to service foreign loans, while Europeans are reluctant to collaborate on building infrastructure and development projects. Multilateral collaboration between Western powers and Sahelian countries is necessary to ensure development and security in one of the poorest regions of Africa; without it, all initiatives will likely prove futile.

Mohammed Ahmed Gain is a professor of Postcolonial Studies at the University of Ibn Tofail (Kenitra-Morocco), president of the African Institute for Peacebuilding and Conflict Transformation (AIPECT), and a non-resident scholar with MEI’s North Africa and the Sahel Program. The views expressed in this piece are his own.