A country in free fall, a corruptocracy in full swing: Why a building collapse in Iran matters 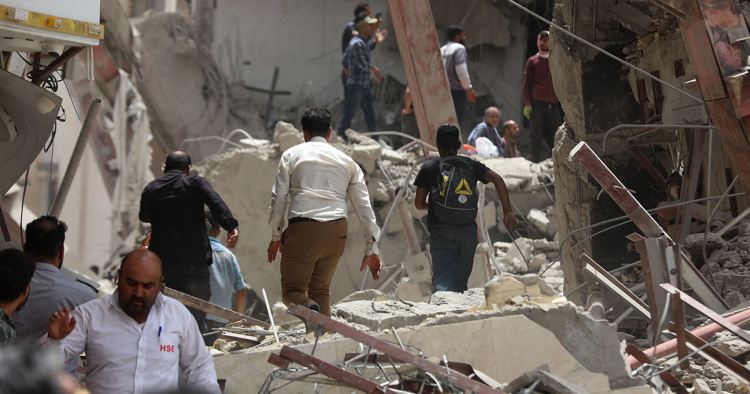 On May 23, 2022, Metropol tower, a 10-story commercial building in the city of Abadan in Iran’s oil-rich southwestern Khuzestan Province, collapsed, killing at least 41 people and trapping dozens more beneath the rubble, according to disputed official figures. Although the lower floors were open to the public, the building was still under construction. According to an unverified eyewitness account, some 150 construction workers were in the basement at the time of the collapse. The tragedy was eerily reminiscent of the January 2017 fire that engulfed the iconic Plasco building in Tehran, killing 26 people, among them firefighters.

Within an hour of the collapse of the tower, anti-riot police, true to their crisis-management playbook, flooded the region. In stark contrast, however, it took more than 24 hours for firefighters, emergency personnel, and rescue workers to come from Tehran — and once they finally reached Abadan, they lacked the equipment necessary to carry out rescue operations. In the absence of a responsible and responsive government, ordinary citizens, equipped with nothing more than simple kitchen pots, worked day and night to pull survivors out from under the rubble.

For an outside observer, this might seem like a tragic but random accident that could have happened anywhere. In reality, it is a stark illustration of a country mired in corruption and mismanagement. For the past four decades, the criminals responsible for such deadly tragedies have time and again escaped justice thanks to their connections with the Islamic Republic’s ruling class. This time around, the culprits seem poised to wash their hands of the crimes they’ve committed once again.

The Metropol building, consisting of two towers, of which one was already built, belonged to a holding company founded and headed by, and named after, Hossein Abdolbaghi. It is among the many holding companies that have grown over the past two decades with the backing or support of the Islamic Republic’s religious and security bodies, particularly the Islamic Revolutionary Guard Corps (IRGC). With such powerful patrons, these companies can dispense with transparency.

Abdolbaghi, a 41-year-old developer who owned the building, was a nobody a decade ago but became a construction magnate through his powerful contacts. He is the poster child for the hundreds of individuals who have thrived in Iran’s post-revolutionary political economy. Over the last decade, Abdolbaghi and his holding company have managed to take over enormous construction projects in Khuzestan, reportedly through nepotism and bribery. Nine years ago, another building owned by the company ended up collapsing, luckily after it was evacuated. Even though they failed to follow safety measures, Abdolbaghi and his associates faced no accountability for their actions.

While the Metropol building’s vulnerability to collapse was common knowledge, a deep-seated network of corruption prevented any real action from being taken. A local journalist had warned about the impending disaster a year ago. Iran’s Construction Engineers League, for its part, had sent six warnings about the potential risks posed by illegally adding additional stories on top of the building’s originally approved six. And yet, the local and national authorities turned a blind eye to the conspicuous violations of safety regulations. Sadly, the authorities’ dereliction of duty was to be expected, as they themselves benefited from the holding company’s projects.

Iranian construction projects have long been criticized by experts for safety violations in a country prone to earthquakes. After the collapse of Tehran’s Plasco building, the Construction Engineers League, an organization with no executive power, identified at least 170 unsafe buildings in the capital that it deemed to be verging on collapse. Moreover, the head of the Iranian fire department recently identified 33,000 unsafe buildings in Tehran. Of these, 360 were described as needing “immediate intervention” while 123 were said to be in a state of disrepair comparable to that of the Plasco building at the time of its collapse.

The government’s priorities, however, clearly lie elsewhere. As its citizens suffer, the Islamic Republic instead chooses to busy itself with its propaganda machine, broadcasting praise for Supreme Leader Ayatollah Ali Khamenei to boost the morale of his supporters, even as they hear anti-government chants such as “Death to Khamenei” from every corner of the country.

A corruptocracy in full swing

The collapse of buildings like the Metropol tower is the culmination of four decades of social, political, and ecological neglect born of rampant institutionalized corruption. From its inception, the regime has relied on a distinction between “insiders” (khodi) and “outsiders” (qeyr-e khodi) to dole out access not only to political power but also to economic resources and privileges. The clique of “insiders” in the political arena have thus accumulated fabulous wealth.

When Ali Khamenei, the current supreme leader, took power in 1989, lacking the religious qualifications and popular credibility of his predecessor among regime “insiders,” he reinforced efforts to translate the political “insider-outsider” binary into state and para-statal economic organizations. Even though state organizations were not accessible to regime “outsiders,” they were nonetheless subject to rules and regulations. The managers of these organizations sometimes switched from one government to the next, although no “outsider” is ever promoted to the highest ranks. Khamenei further institutionalized the insider-outsider distinction in state-regulated sectors of the economy, which are at least assumed to be responsible to the public, and para-statal economic organizations, which are exempt from taxes as well as general auditing. He also expanded existing para-statal organizations, known as bonyâds, at an exponential rate.

Neither specialized researchers nor the general public know for certain the extent of para-statal organizations’ assets and activities, but these opaque entities clearly have a stranglehold on the Iranian economy. Chief among the bonyâds is Astân Quds Razavi, a foundation that manages the shrine of Imam Reza in Mashhad and is considered the largest landowner in the Middle East, with six major holding companies and a total of 351 firms. The Martyr’s Foundation (Bonyâd Shahid) controls more than 250 companies, and the Foundation for the Oppressed (Bonyâd Mostazâfan), the owner of the collapsed Plasco building, oversees more than 400 companies and subsidiaries across nearly every sector of Iranian industry. The Imam Khomeini Relief Foundation (Comité Emdâd Emâm Khomeini), another leading player with its four holdings, is even less transparent. Last but not least, the Headquarters for Executing the Order of the Imam (Setâd Ejrâ-ye Farmân Emâm) operates in most industrial and business sectors. Such bonyâds abound and following the nationwide protests at the turn of the year 2017/18, both state and para-statal bonyâds are run directly by the Supreme Leader and CEO Khamenei himself.

In the same vein, the IRGC evolved from a defense force during the Iraq-Iran War into a far-flung empire, active not only on the battlefield but also in diverse markets. In other words, a well-run quasi-state has grown not only in size but also in influence, transforming into perhaps the most powerful political force in contemporary Iran, with its own financial, economic, industrial, agricultural, military, cultural, and intelligence arms. Its Khatam al-Anbiya mega-conglomerate, for example, has come to monopolize major infrastructure projects in Iran.

Through this network, Khamenei funnels resources to the elite, bestows patronage, and buys influence and political support. Members of the elite are shuffled between the various bonyâds. Parviz Fattah, former head of the Imam Khomeini Relief Foundation, went on to become the head of the Foundation for the Oppressed. Mohammad Mokhber, former business and transportation deputy of the Foundation for the Oppressed, became the head of the Headquarters for Executing the Order of the Imam until recently, when he moved over to the vice presidency. Iran’s current president, Ebrahim Raisi, became the chairman of Astân Qods Razavi and then the chief justice before assuming the presidency. The list goes on.

Corruption and clientelism are ingrained in the political economy of the Islamic Republic. This labyrinthine system, inscrutable even to Iranians, coupled with the dominance of the IRGC over Iran’s economy, has resulted in systemic corruption in which proximity to the IRGC elite and allegiance to the supreme leader determine success.

Abdolbaghi’s holding company, for instance, was working directly with the Arvand Free Trade Zone Organization, one of the main parties responsible for the Metropol disaster, as it issued the building permit. Its former board of directors included, among others, Ali Shamkhani, a former IRGC commander and now secretary-general of the Supreme National Security Council; Mohammad Forouzandeh, a former IRGC commander and the longest-serving head of the Foundation for the Oppressed; and Iranian Vice President Mokhber. During a visit to the site, Mokhber decried, without a hint of irony, the “widespread corruption” that led to the building’s collapse.

The Abadan municipality, itself a shareholder in the Metropol project, had sold land to the company at a steep discount in exchange for properties for the local authorities. Abdolbaghi also built a police station in Abadan in a blatant quid pro quo and was hailed by the chief of the Khuzestan police as a “philanthropist.” Pictures show him with the former mayor and governor of Khuzestan Province, both of whom have been accused by locals of involvement in his construction projects.

Abdolbaghi himself is said to have been found dead in the rubble of the building, seemingly killed by the results of his own corruption. But there is little trust in any official statement these days, and the Abadan special prosecutor had previously stated that Abdolbaghi was arrested along with 10 others involved in the construction of the Metropol building, including current and former mayors. Ultimately, regardless of his fate, Abdolbaghi is just one cog in a much larger machine of corruption. Protestors in Abadan and other cities in Khuzestan are now making their voices heard, chanting a clear response to four decades of corruptocracy: “The mullahs must go.”

Rahman Bouzari is an Iranian freelance journalist, formerly with Iran’s leading reformist daily, who has also written for international publications, such as The New York Times, OpenDemocracy, CounterPunch, and Al Jazeera English. You can follow him on Twitter @BouzariRahman.

Dr. Ali Fathollah-Nejad is an Associate Fellow and the author of the Iran in Focus brief at the Issam Fares Institute for Public Policy & International Affairs at the American University of Beirut. He is also the author of the book Iran in an Emerging New World Order: From Ahmadinejad to Rouhani (2021) and the initiator and co-host of the Berlin Mideast Podcast. You can follow him on Twitter @AFathollahNejad. The views expressed in this piece are their own.