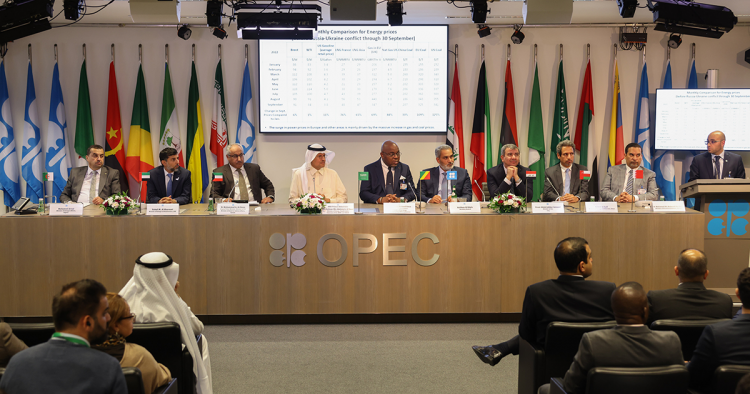 The decision to cut 2 million barrels per day (bpd) in oil production taken by OPEC+ on Oct. 5 captured far more attention in Washington, D.C. — and indeed around the world — than any of the oil ministers present in Vienna likely thought that it would. The move, which OPEC+ itself says will result in a smaller cut than announced, comes as benchmark oil prices had slipped below $90/barrel and markets face historic uncertainty heading into 2023, driven by a growing range of variables, chief among them the political and economic fallout from Russia’s war in Ukraine.

While OPEC+ insists that its decision is apolitical and “technical” based on its view of the market, Washington almost immediately branded it as a decision made mostly by Saudi Arabia, in opposition to U.S. interests, and perhaps worst of all, supportive of Russian interests. But much of the discussion around U.S.-Saudi ties as they relate to the group’s decision has been somewhat, although not entirely, misplaced. It is unfortunate that many of the nuances impacting the decision have been overlooked, especially as highly consequential policies like the EU’s embargoes on Russian oil and refined products as well as the G7’s oil price cap come into effect, the latter of which remains a subject of confusion even in industry circles. However, allegations that Riyadh is openly siding with Moscow have been vastly overblown, and the tendency to frame OPEC+ as holding total sway over markets from an unassailable position is similarly unhelpful.

What the members of OPEC+ either overlooked (or were more likely unconcerned with) is that everything related to Russia has become a political lightning rod in the West, and the role that energy has played in the conflict essentially supercharges the negative perception of almost any form of energy cooperation with Moscow. The speed with which Western oil firms exited the country almost immediately after the war began should have made this clear long ago. Yet as many OPEC+ member states are not direct parties to the conflict, they may not have expected that their multilateral cooperation with Russia via the OPEC+ alliance would come under such intense scrutiny and face such severe criticism. Similarly, they may not have anticipated that the assertion that the decision in Vienna was a “technical” one would fall on deaf ears or be dismissed outright, regardless of how true it may be.

For its part, what Washington seems to ignore about OPEC+ is that the organization would cede an enormous amount of influence over oil markets if it were to terminate its cooperation with Russia, a point emphasized through the renewal of this cooperation framework at the same meeting, preserving OPEC+ until at least the end of 2023. However, this factor has been clear to OPEC+ observers for months. Frequent discussions of OPEC+ spare capacity during a period of elevated U.S. gasoline prices this past summer illustrate the fundamental linkage between production capacity and the group’s ability to impact markets, and likewise demonstrate why the viability of OPEC+ rests on continued cooperation with Moscow. Additionally, the aforementioned embargoes and price cap have complicated OPEC+’s ability to project market fluctuations in early 2023, and while this holds true for most other forecasters as well, its own projections have an arguably more pronounced impact when it comes to physical supply dynamics.

Not coincidentally, it is the group’s actual ability to impact the supply picture that lies at the core of this issue. On paper, OPEC+ maintains a production capacity of approximately 45.5 million bpd, and Russia’s production baseline of 11.5 million bpd accounts for 25% of this. Compare that to the 15.2 million bpd in capacity (again, on paper) of the group’s nine, non-OPEC members subject to quotas (this excludes Mexico), and Russia makes up an overwhelming 76% of available capacity. To put it as simply as possible, not only does Russian capacity anchor OPEC+ cooperation, its removal would have a catastrophic impact on the group’s ability to influence oil markets. Other group members may have varying opinions on Russia’s war in Ukraine, but their perspectives on the need to keep Russia in the OPEC+ fold are unlikely to be as diverse.

Yet Russia’s long-term production capacity is likely to fall as it loses markets and it may become forced to shut in production that cannot easily be restarted, with estimates of as much as 1.2 million bpd in capacity lost. This is why Russian capacity looks much different on paper than it likely does in reality, but within OPEC+ this scenario is hardly limited to Russian production — a discrepancy that the organization does not hide. For starters, although its production cut is nominally 2 million bpd, in reality the actual cut is likely to be closer to 1 million bpd. This is largely due to the underperformance of many OPEC+ members that continually miss monthly targets, resulting in a production shortfall that, as of September, still exceeded 3 million bpd.

The fact that the quota-bound members of the group have consistently missed production targets for months is not a new development, nor is the fact that Venezuela and Iran remain mostly or partially offline, or that 1.2 million bpd of Libyan production remains highly vulnerable to intermittent shut-ins and blockades stemming from domestic security risks. Yet these factors only reinforce the fact that OPEC+ is stuck with Russia regardless of its members’ views of the Ukraine war, limiting its ability to stem the geopolitical blowback its decision has generated. These will not have been the only factors that determined the outcome of the Oct. 5 meeting, but they represent very real constraints on what other options the group has in choosing to add or curtail supply.

The fast-approaching U.S. midterm elections have also dragged domestic politics into this issue, compounding the complexity and to some extent likely setting the stage for the Biden administration’s response. However, the White House has a limited range of options for sending an impactful message. While it is likely to authorize further releases from the Strategic Petroleum Reserve, this policy has been controversial from the start, and draining U.S. inventories to record low levels comes with its own set of risks, especially in the event of a larger supply outage. Reviving the infamous “NOPEC” legislation has emerged as another likely possibility, though it ultimately does little to address short-term domestic concerns around a looming recession and persistent inflationary pressures.

Even if OPEC+ members wanted to turn their backs on Russia, the shortfall generated by the alliance’s underperforming producers has now cemented the critical role that Russian barrels play in its market balancing strategy. While there is little the U.S. can do to alter this reality, a rethinking of sanctions on other OPEC members is clearly underway, perhaps demonstrating the limits of Washington’s options at this time.

Looking ahead, the “technical” aspects of OPEC+ performance, such as its loss of spare capacity over the years, will become increasingly important when deciphering the alliance’s production policy in the months ahead. That OPEC+ dynamics have a profound impact on U.S.-Saudi relations is undeniable. However, viewing the group’s decisions entirely through the lens of bilateral ties will give policymakers a faulty understanding of OPEC+, and could have potentially dire consequences as energy security becomes increasingly linked to geopolitical alignment.

Colby Connelly is a non-resident scholar with MEI’s Economics and Energy Program and a senior analyst at Energy Intelligence.