Does a new Israeli government mean a new regional policy? A look at the first 100 days 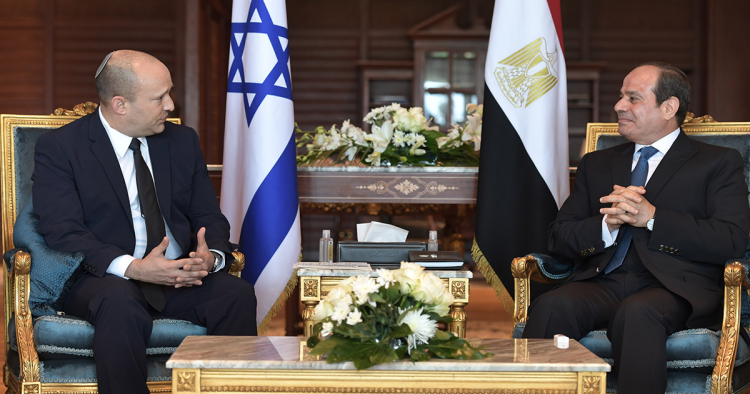 Naftali Bennett found his way to the Israeli prime minister’s office, even though his party won only six out of 120 seats in the Knesset (the Israeli parliament) in the March 2021 elections. He replaced the country’s long-time prime minister, Benjamin Netanyahu, who held the position for a combined total of 12 years and set the tone for Israeli policy, especially in the region. With the new government, formed in June, recently passing the 100-day mark, it is time to ask whether the change in the prime minister’s office has resulted in a real change in Israel’s regional policy.

This question is especially pertinent as Bennett’s party, Yamina (“the Right” in Hebrew), with just six seats, gives him less leverage than previous Israeli prime ministers and makes him more reliant on his coalition partners. This may have an advantage, however, as he only needs to serve the interests of a small group of Knesset members.

Yamina was originally located to the right of Netanyahu’s Likud party and Bennett himself was long opposed to joining a government that relied on the support of the Joint List (a political alliance between four of the major Arab political parties in Israel). But to form a coalition and receive the mandate as prime minister, he accepted the inclusion of Mansour Abbas and his United Arab List (Ra’am) party.

The unique makeup of this government, which ranges from the social-democratic Meretz Party to the hard-right Yamina, forces it to focus more on foreign rather than domestic policy, given the major disagreements between its members on the latter.

Since taking over in June, Bennett and his ministers have sent many messages, in both words and deeds, regarding Israel’s policy toward the region. This article will examine them and try to paint a clear picture of Israel’s regional policy under the new government.

A flurry of meetings

On Sept. 13, Bennett met with Egyptian President Abdel-Fattah el-Sisi in Sharm el-Sheikh, Egypt. This was the first time in 11 years that an Israeli prime minister had made a public visit to the country. Beyond the expected discussions about the Palestinian question, the Iranian threat to the region, and economic cooperation, the Egyptian hosts put a great deal of effort into making the visit a positive one. This was evident in its highly public nature, the numerous cordial photos of the two leaders, el-Sisi’s invitation for Bennett to stay overnight, and, for the first time in years, the Egyptians’ placement of a full-size Israeli flag behind the prime minister. Optics are important and such positive images haven’t been seen in these kinds of meetings for a very long time, since the era of Israeli Prime Minister Menachem Begin and Egyptian President Anwar Sadat, who signed the peace deal between the two countries in March 1979.

Two weeks earlier, Israeli Defense Minister Benny Gantz met with Palestinian President Mahmoud Abbas in the Mukataa in Ramallah. Similar to the Egyptian visit, this was the first meeting between a senior Israeli minister and President Abbas in years, although it was made public only after it took place. Gantz and Abbas discussed security, political, civil, and economic matters and agreed to maintain contact on the issues raised. While the meeting was coordinated and approved in advance by Bennett, he said that he “does not see any point in meeting with Abu Mazen [Mahmoud Abbas]. Gantz asked for a long time so I confirmed to him.” Ayelet Shaked, the Israeli interior minister and Bennett’s closest ally in government, made a point of saying that “Abu Mazen pays terrorists and the prime minister will not meet with him.” Hamas also condemned the meeting, decrying it as “a knife in the back of our people.”

During a conference at the Institute for Counter-Terrorism (ICT) on Sept. 12, Israeli Foreign Minister Yair Lapid presented a plan developed by his office, entitled “Economy for Security in Gaza,” which aims to strengthen the Palestinian Authority at the expense of Hamas. The foreign minister rejected the long-standing dichotomy that Israel can either reconquer the Gaza Strip or continue to engage in cyclical rounds of operations against terrorist groups there, referring to both as “bad options.”

Lapid also joined a meeting that brought together all the members of the Abraham Accords for the first time and declared that “we are open for new friends.” In an op-ed published in Haaretz entitled “The first 100 days of a different foreign policy,” Lapid criticized the previous government’s policy, outlined the actions taken by the new government, and concluded by saying, “A foreign policy that’s optimistic, open-minded and ready for dialogue isn’t a price we have to pay, it’s an asset we’re building in our relationship with the world.”

A change, but a “change government”?

The combination of the new government’s actions and statements, along with its complicated internal dynamics, show a change in Israeli government perceptions and approach toward the region that has been well received by the surrounding countries. It is a significant change, even if the main aim is to differentiate itself from the previous government, and especially from Netanyahu.

So far, the opposition in the Knesset has largely been waiting for Bennett’s fragile government to fail, while occasionally criticizing its actions. The hard right, for instance, viewed the meeting between el-Sisi and Bennett mostly through the prism of the Palestinian question, interpreting it as an Egyptian step aimed at reducing Israel’s territory and returning it to the 1967 borders.

While last year brought rapid change with the signing of normalization deals with the UAE, Bahrain, and Morocco, the situation is quite different when it comes to Israel’s immediate neighbors, Jordan, Egypt, and of course the Palestinians. The Abraham Accords involved countries that, aside from their general solidarity with other Arabs, have nothing against the state of Israel; by contrast, Israel and its immediate neighbors have a long history of hostility and competing territorial claims, which make negotiations much more difficult.

The new Israeli government is eager for achievements that will help it get re-elected and win it a place in history as a “change government,” as its members frequently refer to it. To earn this title, they have chosen to focus their energy on regional policy. However, there are also other motivating factors, including a desire to divert attention away from the government’s poor handling of the COVID-19 pandemic, which runs counter to the widely praised response of the previous administration. On Bennett’s first day as prime minister, Israel was seen as a global leader in dealing with the virus, while several months later, thousands of people are getting infected every day.

More than anything else, the current Israeli government wants to be remembered as a “change government” after years of Likud rule. For now, it is focused on public relations and image-building, but soon it will have to start making choices and taking action — and this will be the real test, for all sides. In the digital age, images have taken on great importance, perhaps even more than policy itself in shaping public perceptions. So, while Israel does indeed have a new regional policy, for now it remains just that and lacks any real substance or actions to back it up.