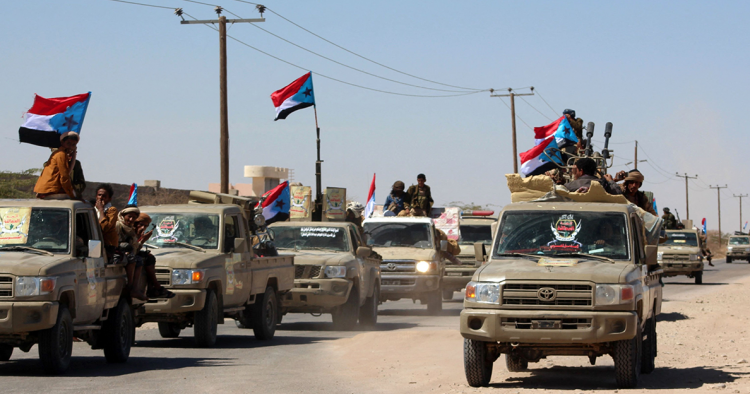 The battle for control of the Yemeni heartland and its energy resources has reached a turning point. Yemen’s internationally recognized institutions are, once again, in crisis. In fact, the current infighting within the “government camp” between the secessionist forces close to the Southern Transitional Council (STC) and the Saudi-backed Islamist political party Islah threatens both the long-stalled implementation of the 2019 Riyadh Agreement and the political legitimacy of the newly-established Presidential Leadership Council (PLC). This is very bad news for Saudi Arabia, which has invested a great deal in the PLC in an effort to unify the anti-Houthi camp and prevent a new offensive on Marib.

Yemen faces three paradoxical situations. First, despite some violations (mostly in Taiz and Hodeida), the U.N.-mediated national truce between the government and the Houthis is still widely holding, but the anti-Houthi faction is collapsing. Second, the military-political forces that are clashing on the ground — the STC, the STC-affiliated Shabwa Defense Forces, and the Giants Brigades, all fighting against Islah — are formally part of internationally recognized institutions; indeed, the STC’s leader Aydarous al-Zubaidi and the Giants’ commander Abdulrahman Abu Zara’a al-Muharrami are even members of the PLC. Third, the Yemeni government and army risk being territorially sidelined, with the Houthis holding much of the north and Hodeida, and Yemen’s southern secessionist forces having the upper hand in the south.

In recent weeks, the southern secessionist forces, informally backed by the United Arab Emirates (UAE), have seized most of the southern governorate of Shabwa, including the energy fields and the main urban center of Ataq, as well as conquering Shaqra and Ahwar, towns in the coastal governorate of Abyan, as part of a military operation to “cleanse it of terrorist organizations.” In both Shabwa and Abyan, the official Yemeni army and the forces of the Saudi-backed Islah party were defeated or forced to withdraw. There are two key dynamics at play with regard to the UAE-backed forces’ success: They are prevailing not only through military means on the ground, but also through appointments and economic power in local and national institutions; and unlike their previous strategy in 2015-19, these forces are now aiming to control Yemen’s energy fields.

The intra-government battlefields: Shabwa and Abyan

On Aug. 21, the UAE-backed forces seized oil and gas fields in eastern Shabwa. This occurred following weeks of intermittent clashes between, on the one side, the STC-affiliated Shabwa Defense Forces (formerly the Shabwani Elite Forces) and the Giants Brigades (deployed at the governor’s request) and, on the other, Islah’s forces, army units, and the governorate’s pro-Islah Special Security Forces. Islah, which is closely associated with part of the Salafis and the local Muslim Brotherhood, usually rallies Yemen’s conservative and tribal elements.

As the violence erupted, the PLC established a military committee for de-escalation, authorizing the pro-UAE governor of Shabwa to stabilize the area. On Aug. 23, the STC launched a military operation called “Arrows of the East” in Abyan, starting from the coastal center of Shaqra. The operation aims to target “terrorist organizations” — a wide-ranging term that includes, in the STC’s view, al-Qaeda in the Arabian Peninsula (AQAP), the Houthis, and especially the Muslim Brotherhood. PLC President Rashad al-Alimi has ordered the STC to cease its military operations in Abyan until the Riyadh Agreement is implemented, which would include troop redeployment and security sector unification; however, the STC has thus far not halted its offensive. Instead, it is possible that the UAE-backed southern forces will extend their offensive into Hadhramawt, a key oil-rich southern governorate whose northern valley is still controlled by Islah. During a meeting with Hadhrami notables, STC leader Zubaidi expressed the intention to include Hadhramawt in “these operations,” answering “popular demands… [to] liberate” the valley.

The decline of Islah: A problem for Saudi Arabia

Against this backdrop, the political and military power of Islah has visibly declined. The party, which widely capitalized on post-2011 transitional institutions, no longer seems able to preserve its military and political position. Notably, the political marginalization of Gen. Ali Mohsin al-Ahmar, who was dismissed as vice president in April when then-President Abed Rabbo Mansour Hadi handed over power to the PLC, was a remarkable setback for Islah. Before he was replaced in late July, Hadhramawt Governor Faraj al-Bahsani sacked his Islah-aligned deputy, who was responsible for the Hadhramawt Valley, a decision that was subsequently annulled by the PLC to defuse tensions.

Islah’s decline is a problem for Saudi Arabia because, unlike the UAE-backed forces, Islah supports a united Yemen and used to be supported mainly by northern tribes with ties to the republican elites. If the Houthis hold most of the north and Hodeida in the west, and the Emirati-backed groups fighting for greater autonomy or even secession prevail in the rest, Riyadh can only rely on small, marginal areas of the country. Thus, it is no surprise that the diplomatic talks that Saudi Arabia and the Houthis are holding in Oman, without representatives from Yemen’s recognized institutions, focus on securing the Yemeni-Saudi border, Riyadh’s essential — and minimum — goal in Yemen now.

How the UAE-backed forces are winning: Politics, salaries, and weapons

Within the government camp, the Emirati-backed forces enjoy a political advantage: Their leaders were co-opted by the internationally recognized institutions and this enhanced their political legitimacy. The heads of the STC, the National Resistance Forces (NRF), and the Giants Brigades are all members of the PLC, which was established in April under Saudi pressure. In a recent cabinet reshuffle, Alimi appointed four new ministers that are aligned with the STC, including the defense minister, who commanded the anti-Houthi troops in Marib. Since late 2021, pro-Emirati governors have replaced pro-Islah ones in three regions in the south of Yemen: Shabwa, Hadhramawt, and Socotra.

Finally, the UAE-backed forces enjoy a military advantage. After heavy fighting, they have gained strategic positions in both Shabwa and Abyan. In early 2022, when the battle for the neighboring governorate of Marib was still undecided and the Houthis had also entered two districts in Shabwa, the Giants Brigades were deployed to fight the Houthis. Unlike local Islah forces, the Giants successfully expelled the Houthis from the governorate.

Now, in Shabwa, targeted military attacks have quickly turned into street fighting, with both factions deploying troops and armored vehicles. The fighting has resulted in more than 50 casualties so far, predominantly among soldiers and militants. In August, Shabwa registered skyrocketing violence and the highest number of internally-displaced people in the country. According to unconfirmed reports, Emirati drones have also struck Islah and army positions in Ataq, which would be the first time this has happened since the 2019 clashes in Aden, before the Riyadh Agreement was brokered.

The new UAE-backed forces’ strategy: From the rimland to the heartland

The Emirati-backed forces in Yemen are following a different strategy than before. They still control Yemen’s rimland — the coasts, islands, ports, and energy terminals — but they are now working to seize the heartland. From 2015 to 2019, with the support of the Emirati troops on the ground, these groups took the southern coastline along with its port cities and maritime infrastructure, competing and clashing with Islah and, to a lesser extent, AQAP. In Shabwa, for instance, the UAE-backed forces organized ground operations against AQAP and managed to gain control of the Balhaf terminal, the only liquefied natural gas facility in the country.

The UAE-backed forces are now attempting to take control of strategic internal routes, transport links between energy-rich regions like Marib and Hadhramawt, and possibly access to oil and gas fields in Shabwa and in “the government’s triangle of power”: in other words, the heartland of Yemen. Controlling these areas would complete the forces’ economic “supply chain,” boosting financial revenues and the prospects for a micro-state that is completely autonomous from recognized institutions.

However, it is important to also consider the nature of Yemen’s southern separatism: It is historically characterized by deep and often competitive, or even conflictual, regional identities. This could prove a challenge to the UAE-backed forces, even if they end up controlling both the rimland and heartland, as new political-military rifts can always emerge in and between southern regions.

Eleonora Ardemagni is an Associate Research Fellow at the Italian Institute for International Political Studies (ISPI), a Teaching Assistant at the Catholic University of Milan, and an Adjunct Professor at the Graduate School of Economics and International Relations-ASERI. Her research analysis focuses on foreign policy and security issues in Yemen and the Gulf monarchies, as well as Arab military forces. The views expressed in this piece are her own.