Escalating emigration and the “drought” in Iran's IT industry 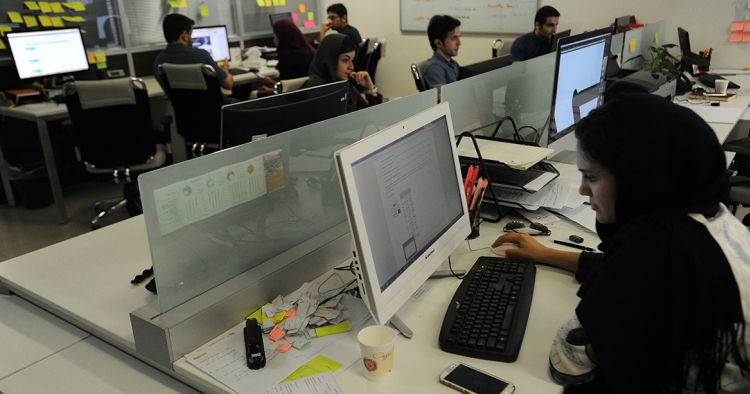 For many years, Iran’s educated elites have been leaving the country in growing numbers. From doctors to scientists and researchers to engineers, they are emigrating, mostly to Western countries, for various reasons, but chief among them are poor economic conditions and a lack of political and social freedoms at home.

While estimates of the actual number of Iranians who have left the country differ, researchers agree that the overall size of this emigration wave has been growing like never before. According to the 2021 “Iran Migration Outlook” report, produced by the Iran Migration Observatory research institution, the number of Iranian migrants has more than doubled over the past three decades, rising from a total of around 800,000 in 1990 to 1.8 million in 2020.

While the growing quantity of mostly skilled and young people heading abroad clearly affects the country in multiple ways, Iran’s information technology sector is among those hit hardest due to the burgeoning outflow of its experts in recent years. Thanks to the relatively fast-paced expansion of telecommunications infrastructure and increased access to the internet — the country has nearly 107 million internet subscribers with a penetration rate of over 127% — the share of the digital economy in Iran’s GDP has grown from just 2.6% to 6.87% over the past decade.

According to official government data released by the Statistical Center of Iran, the value of the national digital economy during the past Iranian calendar year of 1400 (March 23, 2020 to March 22, 2021) was around $45 billion. The authorities aim to increase the digital economy’s share to 10% of GDP over the next three years, but in light of the escalating brain drain of Iranian IT experts, many have warned about the growing challenges to achieving this objective.

“Drought” of IT professionals

According to the above-mentioned Iran Migration Outlook report, 50% of those involved in Iran’s startup community, along with 44% of university students and graduates, are planning to emigrate. The report adds that 55% of those active in the startup community believe they will definitely not return after leaving the country. While there is no clear data on the number of IT experts who have left Iran, the growing emigration trend has rattled officials and businesses, including tech startups.

Adel Talebi, the secretary of the Internet Business Association, was quoted by local Iranian media last month as saying that the country faces a shortage of highly skilled individuals due to emigration. This has affected not only the field of cyber security but all areas of information technology, including development, software engineering, and programming. Back in February, Hamid Behnegar, a senior member of the Iran Chamber of Commerce, Industries, Mines and Agriculture, also warned about what he described as a “drought of specialized manpower” in the IT industry.

Similar sentiment is expressed by members of the Iranian startup community. For example, “Ehsan,” a Tehran-based entrepreneur who managed a company of around 40 employees until last year, told the author that despite managing to survive the country’s poor economic conditions, his firm went bankrupt after several key members of his team decided to leave Iran for better working conditions abroad. “The shortage in human resources in the IT sector is a crisis. Global demand for IT professionals has grown, and Iranian companies are unable to compete with them when it comes to recruitment,” Ehsan noted.

But the deteriorating conditions do not stop there. Some professionals, while remaining in their home country, have turned to virtual migration and are now doing remote work for foreign companies and benefiting from much higher wages without having to bear the hardships of emigration.

Why do they leave?

A broad array of reasons motivates some highly educated Iranians to leave Iran, including the country’s poor economic conditions, a lack of political stability, and absence of social freedoms. However, for those active in Iran’s IT industry, the government’s restrictive measures on internet use and the censorship of popular social media platforms, along with the unpredictability of regulations in this regard, can be seen as important factors behind the tsunami of IT experts leaving Iran.

“Mohammad,” 32, is illustrative of the above-described trend. A computer programmer, he initially moved to Istanbul before his second migration to the Netherlands, which has become a popular stop for many Iranian IT professionals. For him, “political instability, deteriorating economic conditions, and social obstructions” were the main factors that triggered his decision to leave Iran. Morteza, 38, is another Iranian IT professional who left Iran last year and shares Mohammad’s views. As he noted in an interview with this author, “I could not bear the harassments of different regulatory institutions and the internet censorship that was directly affecting my work.”

Future of Iran’s IT industry

Experts warn that the loss of human capital in this industry will have widespread consequences due to the expanding role of technology in all businesses and industries. According to entrepreneurs like Ehsan, Iranian startup companies have suffered the most because of the current situation. Many of these firms are being forced to shut down or postpone launching new services or products because they cannot afford or even find the talented experts needed to help them reach their targets. “Since a large number of top IT professionals have left the country over the past couple of years, the demand for the remaining professionals is very high; and therefore, only the large companies can afford to pay a salary as high as $2,000 or even $3,000 a month, literally pushing the small companies out of the market,” he contended.

Yet the consequences of such an exodus do not end there. According to many experts, Iran’s growing cyber vulnerabilities in different businesses, industries, and national infrastructure are already costing the country both in terms of economic loss and growing insecurity. Iran has been targeted by a number of cyber attacks in recent years, many of which the authorities have blamed on the United States and Israel. Cyber attacks against Iran’s railway system (July 2021), the country’s national fuel distribution system (October 2021), a number of major steel producers (June 2022), and the municipal government website of Tehran (June 2022) are just a few examples.

As Iran tries to assert increasing control over the internet — and amid growing local discontent and stalled international negotiations over reviving the 2015 nuclear agreement — many expect the flight of the country's IT professionals to continue. This worsening “drought” in highly skilled human capital will only further burden an already struggling industry.

Maysam Bizaer is an analyst and commentator who focuses mostly on Iran's foreign policy, politics, and economy. He is a frequent contributor to a number of international media and U.S.-based think tanks. Follow Maysam on Twitter @m_bizar. The views expressed in this piece are his own.