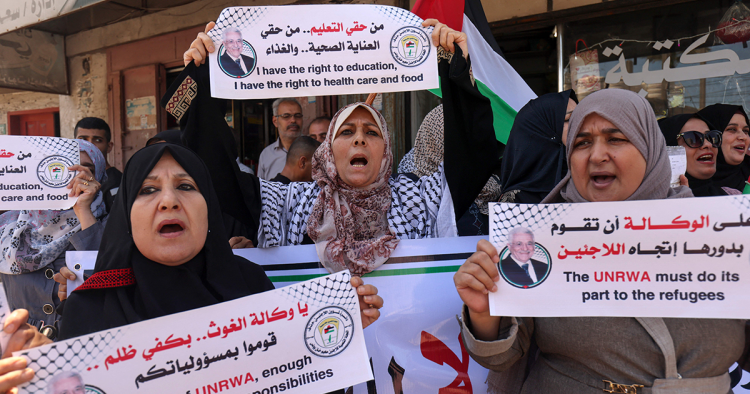 In early June 2022, the Advisory Commission of the United Nations Relief and Works Agency for Palestinian Refugees in the Near East (UNRWA) met in Beirut. Facing a $100 million budget deficit and the indifference of donor countries, UNRWA’s future is uncertain. Commissioner-General Philippe Lazzarini explained to the Advisory Commission’s members, all representatives of donor states, that donors have recommended he reduce services to match the available funds. “How would your ministers decide on the suggested financial cuts?” Lazzarini asked, “How many children are you ready to put in one classroom? Which children should be denied an education? Which patients should be denied urgent hospitalization? Which families of Palestine refugees who already report reducing their food intake, will you ask to reduce even more?”

Set up in December 1949, UNRWA was created to help meet the needs of Palestinian refugees and prevent the collapse of refugee communities during and after the Nakba, the destruction of Palestinian society that accompanied the creation of the state of Israel. UNRWA is the main provider of health, education, and relief services to over 5.5 million Palestinian refugees in Lebanon, Syria, Jordan, Gaza, and the West Bank, including East Jerusalem. The organization is one of the largest employers of Palestinian refugees, providing work to over 28,000 full-time employees. On average, the salaries of its workers support a family of five individuals.

In the past, UNRWA provided a range of services to Palestinian refugees. This included in-kind food supplies, educational materials, grants for higher education, infrastructure improvements, and microfinance credits. UNRWA also contributed to the costs of health care expenses that its facilities did not provide. But the agency’s funding has been stressed for decades and its services have suffered as a result. Today, UNRWA is a shell of its former self.

This is the product of a deliberate campaign by political opponents in Israel and the United States. Former Israeli Prime Minister Benjamin Netanyahu repeatedly targeted UNRWA and sought to change how refugees were defined in order to reduce the agency’s funding. During the Obama administration, Netanyahu relied on Republican allies in the U.S. Congress. His efforts were bolstered by the Trump White House, which cut all U.S. funding to UNRWA in 2018.

Although U.S. support was restored by the Biden administration in 2021, UNRWA continues to face a large budget deficit and political pressure. Fears are now growing that UNRWA may be ultimately dismantled. Were that to happen, it would dramatically worsen an already dire situation, leaving Palestinian refugees bereft of basic services and lacking protection of their fundamental human rights, and contributing to humanitarian crises across the region.

Fatima N. is a Palestinian refugee in Lebanon whose elderly parents suffer from chronic diseases. Due to shortages and Lebanon’s crumbling economy, patients like Fatima’s parents lack consistent access to essential medications. In January, a doctor at an UNRWA health clinic near the Shatila camp in Beirut advised Fatima to take the miscellaneous medicine on hand at the time for their treatment, as the preferred medication was unavailable.

UNRWA’s facilities do not provide specialized health care services and the agency no longer covers the cost of treatment elsewhere. Like other Palestinian families, Fatima must rely on private health facilities and request assistance from charitable organizations to cover the high fees.

Palestinian refugees in Lebanon are not the only community that suffers from UNRWA’s reduced services and enforced austerity. Palestinians in Syria and Gaza face similar conditions as well. In Syria, UNRWA’s facilities and services were directly impacted by the civil war and slow rebuilding, and these effects were compounded by the COVID-19 pandemic. Over 82% of the estimated 438,000 Palestinian refugees in Syria live below the global poverty line and more than 420,000 require food and monetary assistance.

After more than 15 years of siege and repeated Israeli attacks, life for Palestinians in Gaza has become increasingly difficult. Over 66% of Gaza’s population are considered refugees and UNRWA is the main basic service provider for them; currently it provides food relief baskets to 1.2 million people in the area. According to Adnan Abu Hasna, a media advisor at UNRWA, the agency has witnessed a dramatic increase in demand for services, at a time of rapidly rising fuel and food prices. He explained that it is not possible to differentiate between refugees in “extreme poverty” and “absolute poverty” — income determines the former, while individuals who are “not able to meet the entire basket of needs” fall into the latter category.

As part of the campaign against UNRWA, Israel and its allies have been consistent critics of the agency’s educational services. Although the repeated claims that UNRWA’s textbooks incite violence are unfounded, they have found support in Washington. As a condition for resuming U.S. contributions, the Biden administration required a review of UNRWA’s textbooks and educational materials. In addition, the 2021-22 Framework for Cooperation agreement between UNRWA and Washington required the agency to integrate human rights, conflict resolution, and tolerance education into the syllabus. This suggests that Palestinian refugees are the source of conflict, intolerance, and human rights violations rather than victims of Israel’s occupation or of discrimination by host countries. Meanwhile, Israel and Lebanon do not face the same requirements for improving their educational materials.

At the beginning of June, UNRWA announced the establishment of an education advisory group composed of international experts from a number of organizations, including UNESCO and the World Bank. This advisory group will provide recommendations on a range of issues of strategic importance, including the digitization of education. However, the emphasis on technological solutions, driven in part by the austerity measures placed on UNRWA, ignores the daily realities of life for Palestinian refugees.

Talal A. is a Palestinian refugee who lives in Gaza’s Jabalia camp with four children. The camp is overcrowded, has poor infrastructure and dilapidated buildings, and lacks a sustainable electricity network. Like the rest of Gaza, Jabalia suffers from constant shortages of power and all kinds of necessities. Meanwhile, UNRWA lacks the funding needed to build new schools.

In June 2022, on the last day of school, UNRWA sent Talal's children a guide to creating a Microsoft Teams account on its Digital Learning Platform. However, the students were not provided with an electronic device with which to access the platform. Given the extremely high poverty and unemployment rates in Gaza, only a tiny fraction of Palestinian refugees can afford a tablet or computer for lessons or in-home internet access. Moreover, many also lack power, as Gaza’s chronic shortages of electricity mean generators have become a necessity.

Due to political pressure, UNRWA has also restricted activities sponsored by civil society organizations. Last year, the Palestine Land Society, a non-profit educational organization, sponsored the "This is my village" event for Palestinian refugees. The goal is to provide high school students with education detailing the villages and towns in Palestine where their families lived before the Nakba. However, UNRWA failed to inform students about the event. Based on instructions from its leadership, the agency also refused maps provided by the Palestine Land Society so that students could participate.

According to Dr. Salman Abu Sitta, head of the Palestine Land Society, this decision was the result of pressure from Washington. By threatening its funding, Abu Sitta added, the U.S. prompted UNRWA to remove “Palestine’s geography and history from schools.” He described it as an attempt “to convert UNRWA to a tool of U.S. policy, not a UN agency.”

The combination of continuing political pressure and a worsening financial crisis has made it increasingly difficult for UNRWA to perform its mission. Ms. Huda Samra, a senior media and communication advisor at UNRWA, explains that the agency “was set up at the U.N. General Assembly and its mandate can only be changed by the General Assembly.” She adds that, “UNRWA’s mandate has been renewed by member states at the General Assembly almost unanimously in recent years and the same is expected in 2022.” But the member states have also stood by as the organization has faced chronic underfunding. Indeed, UNRWA recently announced that it has received less than 40% of the $817 million needed for critical services this year.

Meanwhile, Palestinian refugees are now entering the 75th year since the Nakba. Yet few are paying attention to their plight as other crises and humanitarian emergencies have grabbed headlines and international assistance. Indeed, Sweden recently announced that it was shifting its contributions from UNRWA to provide assistance to Ukrainian refugees.

If UNRWA continues to be starved of support or is eventually dismantled, the situation of Palestinian refugees will only become more desperate and dire. The Biden administration can take immediate steps to prevent this from occurring. First, it can make a commitment to end austerity. Washington must work with its European, Asian, and Arab allies to ensure that UNRWA is fully funded. This can be accomplished by increasing the amount of voluntary contributions from donor states as well as making an agreement for ongoing mandatory contributions from U.N. members.

Second, it must avoid reforms that do not recognize the realities on the ground. Technological solutions and politically motivated educational mandates will not erase decades of underfunding, lack of basic infrastructure, and denial of fundamental rights.

Finally, the oldest refugee population in the world is no less deserving of basic human rights than the newest. The Biden administration recently announced that it would resettle 100,000 Ukrainian refugees in the United States. A similar commitment to Palestinian refugees in Lebanon and Syria is needed. This would not eliminate the Palestinian right of return, but would offer five generations of refugees a chance for a new future of dignity and hope.

Unless action is taken now, a humanitarian crisis on a scale similar to the one that forced the international community to establish UNRWA in the first place could re-emerge; perhaps then the world will act.

Dalal Yassine is the Executive Director of Middle East Voices, a lawyer and advocate for gender and human rights for Palestinian refugees in Lebanon, and a Non-Resident Scholar at MEI.