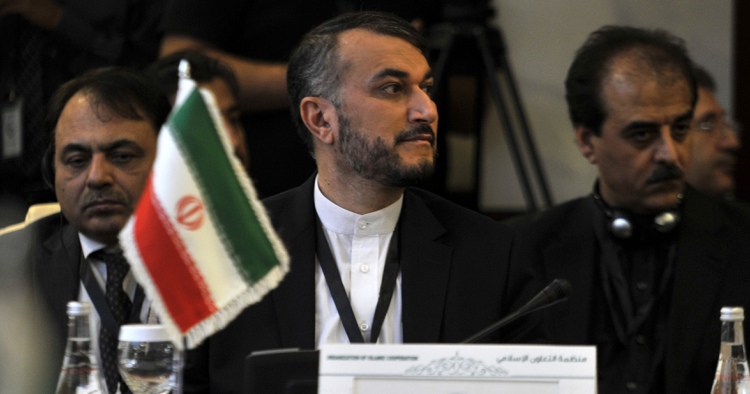 This is the second part of a two-part series. The first part is available here.

Due to his divergent views on Iran's international and regional policies, Hossein Amirabdollahian had various disagreements with then-Foreign Minister Mohammad Javad Zarif while serving as deputy foreign minister beginning in 2011, and these ultimately led to his removal from the post in June 2016. The official reason announced for the change was Amirabdollahian’s appointment as Iran’s new ambassador to Oman, although he refused to accept the position.

At the time, the hardline media and the parliament's National Security and Foreign Policy Commission were highly critical of Mr. Amirabdollahian’s ouster. Critics described the ousting as a move intended to weaken the Quds Force’s armed proxies in the region, referred to in Iran’s official media as the "Resistance Forces." Some media outlets blamed the dismissal of the former deputy foreign minister on a request from Arab countries in the region to the Rouhani administration, a claim that Zarif vehemently denied. Some critics even claimed that Amirabdollahian had been replaced at the request of then-U.S. Secretary of State John Kerry. During his interview with an Iranian state-run TV network on March 3, 2018, Amirabdollahian was asked if this was true, to which he replied, "Ask Mr. Zarif this," refusing to deny the allegations.

Although Zarif did not openly criticize Amirabdollahian, in February 2021 he made negative remarks about his former deputy in an off-the-record conversation, the audio file of which was leaked to the media on April 25.

Zarif said that in March 2015, following a secret agreement between Tehran and Riyadh mediated by the United States for a cease-fire in Yemen, Amirabdollahian revealed the deal in an unexpected interview, which led the Saudis to withdraw from it.

Strong ties to Russia and China

Amirabdollahian is one of the most dedicated supporters of the development of the Islamic Republic’s strategic ties to Russia and China. On Jan. 25 2021, some Iranian media outlets revealed that, as foreign policy advisor to the speaker of parliament, he had met with the Russian ambassador seven times and with the Chinese ambassador in Tehran four times over the course of the previous eight months. This abnormally high number of meetings attracted media attention in Iran, especially given that during the same period, even Mr. Amirabdollahian’s then-superior, the speaker of parliament, had met only once with both the Russian and Chinese ambassadors. Following the controversy over these meetings, he denied "the claim of having a one-sided view in foreign relations," but explicitly defended his attitude by emphasizing that "Tehran's relationship with Beijing and Moscow is strategic."

On Feb. 11 2021, following the visit of the speaker of parliament to Moscow to deliver a secret message from Supreme Leader Ayatollah Ali Khamenei to President Vladimir Putin, Amirabdollahian took on the task of explaining the importance of this letter on Ayatollah Khamenei's website. To justify the Islamic Republic’s approach toward Moscow, he said that “Putin’s Russia is different from the Soviet Union or the Communist Eastern Bloc" and that "Putin's Russia is even different from pre-Putin Russia." Stating that Iran "will definitely benefit from strengthening cooperation with countries like Russia," he noted that Tehran "should prefer the East to the West" in order to protect its national interests, in a nod to the popular Islamic revolution-era slogan "Neither East nor West." Amirabdollahian added that the supreme leader's letter to Putin after the U.S. presidential election "sends a message to the Islamic Republic's regional allies that Iran will no longer wait for the new U.S. administration or the three European states involved in the Joint Comprehensive Plan of Action [JCPOA]."

In his analysis, Amirabdollahian also stressed the importance of Iran's strategic relations with China, noting that about two years earlier, Ayatollah Khamenei had appointed a special envoy, Ali Larijani, the leader’s representative in the Supreme National Security Council, to facilitate Tehran-Beijing strategic talks.

Amirabdollahian has never hidden his admiration for the Russian president. To justify his view, he said on Sept. 25, 2018 that despite the "non-positive mental and historical view of the Iranian people" toward the Russian government, Tehran’s cooperation with Moscow over Syria and other subjects during Putin's presidency "has changed his mind about Russia."

His optimism about Russia and China was in contradiction with Zarif’s pessimism about these governments, despite the latter’s official statements in support of relations with them.

In his off-the-record statement leaked to the media on April 25, 2021, Zarif severely criticized Russia, claiming that Moscow had deliberately tried to sabotage the 2015 nuclear talks between Iran and the P5+1 (the U.N. Security Council’s five permanent members plus Germany). The former Iranian foreign minister also complained about Iran's diplomatic apparatus being exploited by the Quds Force for its extraterritorial projects. But Zarif also accused the Russian president of exploiting the Quds Force for Moscow’s own strategic goals, by encouraging its head, Qassem Soleimani, to get more involved in the Syrian war. "It is in Russia’s interest that Iran does not have a crisis with the West, but does not also have normal relations with it, because normalizing our relations with the West will damage the Russians," Zarif stated. He also suggested that the Chinese prefer Iran to be hostile to the West so that they could "get the most out of" this situation.

It was no surprise that immediately after the release of the audio file of Zarif's comments, Amirabdollahian reacted by tweeting, "During the nuclear negotiations leading up to the JCPOA and other important international negotiations, the Islamic Republic’s achievements on battlegrounds have always been a great support for diplomacy." Amirabdollahian continued, "General Soleimani never jeopardized the people’s interests. He considered battleground and diplomacy as two pillars of protecting the people’s interests and Iran’s national security."

Any possible agreement with the US?

The Rouhani administration ended its term having failed to conclude nuclear talks with the Biden administration in Vienna, and thus the fate of the talks will be determined under Iran’s new president, Ebrahim Raisi.

On June 12, 2021, during a televised election debate, Raisi indicated, "We are committed to the JCPOA, but the agreement must be implemented by a powerful administration." On Aug. 5, during his inauguration ceremony, he reaffirmed his interest in negotiating the removal of sanctions, adding, "We support any diplomatic plan that achieves this goal."

It was in this context that Amirabdollahian reportedly announced the new government's readiness to resume the Vienna talks, during a meeting with Enrique Mora, the deputy secretary-general of the European External Action Service, who visited Tehran to attend Raisi’s inauguration ceremony as the EU envoy.

A tweet written by Amirabdollahian on Aug. 4, 2018, which some media outlets mistakenly referred to as a new statement, indicated that "negotiating with the U.S. has never been a taboo subject." "Two sides have negotiated dozens of times with their foreign ministers over the JCPOA, and during three rounds of talks in Baghdad that I also attended. Negotiation in itself is not a problem, the problem is the U.S.’s bullying behavior, its big crimes, and repeated broken promises," he continued. In another statement on Sept. 25, 2018, he said both the experience of the July 2015 nuclear deal and the experience of the August 2007 talks with U.S. officials on the security of Iraq showed that "the Americans cannot be trusted."

It must not be forgotten that Amirabdollahian begins his ministerial career at a time when, despite Ayatollah Khamenei’s approval of negotiations in Vienna to lift U.S. sanctions, the supreme leader has not allowedIranian negotiators to engage in direct talks with American officials. At the same time, Ayatollah Khamenei has stressed that the Islamic Republic will resume the implementation of its nuclear commitments only if "all American sanctions are lifted" and if Tehran is totally assured of their removal. He has also ruled out making the removal of sanctions conditional on negotiations about Iran’s missile and regional activities.

Given that Mr. Khamenei's very difficult terms prevented the conclusion of the Vienna talks during the Rouhani administration, it is unclear whether or not he will continue to maintain all his previous red lines under the new administration. Nevertheless, it seems that should Amirabdollahian’s Foreign Ministry wish to conclude the negotiations, this goal will only be achieved if the supreme leader agrees — at least on a de facto basis — to revise some of his previous preconditions.

If Mr. Khamenei chooses to do so, flexibility over his red lines may be justified by arguments such as the supreme leader’s greater trust in the new administration and its dedication to the principals of the Islamic regime.

Even so, however, it remains to be seen whether the level of hypothetical flexibility in Tehran will suffice to reach an agreement on the nuclear program and the removal of U.S. sanctions.