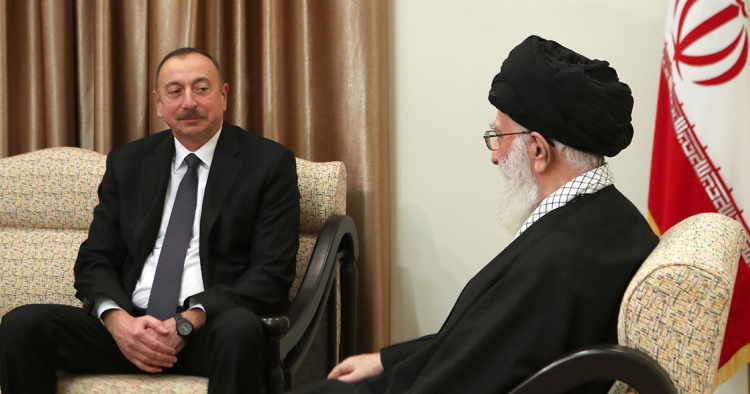 Iran-Azerbaijan relations have been going through a rough patch recently; both sides have genuine concerns that they want addressed.

Iran could have addressed its various bones of contention with Azerbaijan through diplomatic channels. After all, both countries have full diplomatic relations; this includes fully functioning embassies and ambassadors on each other’s soil. Additionally, Ayatollah Ali Khamenei also has his own representative on Azerbaijani soil.

However, the Islamic Republic decided to rely on a show of force instead. The Iranian army (Artesh) and the Islamic Revolutionary Guard Corps (IRGC) held a weeklong military exercise on the Iran-Azerbaijan border beginning on Oct. 1. To make matters worse, during the military exercise, Iranian officials issued several warnings to the Azerbaijani regime and its leadership. Examples include Mohammad Pakpour, commander of the IRGC’s ground forces, indirectly warning Azerbaijan on Sept. 30 that Iran will not “tolerate its neighbors coming under the influence of third-party countries [i.e. Israel]." Then, on Oct. 3, Iran's most powerful man, Supreme Leader Khamenei, warned the Azerbaijan leadership that “those who dig a hole for their brothers will be the first to fall into it.” The hole to which he is referring seems to be Azerbaijan's relations with Israel, especially in the military arena. It is possible that Khamenei was also referring to Azerbaijan’s relations with Turkey.

Iran's miscalculated decision to warn Azerbaijan through military maneuvers and threats is likely to backfire. The Azeris are unlikely to distance themselves from the Israelis, and this could even lead to closer military cooperation between the two countries.

A history of mutual mistrust

It was Iran’s own policies that played an important role in bringing Azerbaijan and Israel together in the first place. Since its independence in 1991, Azerbaijan, which is a secular Shi'a-majority state, has wanted to improve relations with the West. This was due to various reasons, chief among them a desire to reduce Russian influence and interference in its affairs. Azerbaijan also wanted Western technology and investment for its oil-based economy, as well as modern Western weaponry. This is especially true due to a string of defeats which Azerbaijan suffered at the hands of Armenia in the early 1990s.

Soon after Azerbaijan's independence, Iranian Supreme Leader Ayatollah Khamenei embarked on an effort to increase Iran’s influence in Azerbaijan. This was mainly through the dispatch of Iran-trained Azeri religious students and religious missionaries to Azerbaijan. Over the years, Iran has tried to propagate religious messages through its TV stations, such as the Iran-based Sahar TV. This station beams religious, anti-secular, and anti-Western programs in Azerbaijani to the Republic of Azerbaijan. The station has also been known to broadcast anti-Azerbaijan regime segments as well.

This is something that has deeply worried and continues to worry Azerbaijan's leadership, who want to keep their country secular. Although Azerbaijan is an autocracy, it is valid to assume that when it comes to keeping Azerbaijan a secular state, its leadership has the support of most of the population. This is because the Azerbaijani people lived under the atheist Soviet regime for decades, following the October 1917 Bolshevik Revolution, and as a result, most of its population is secular. Additionally, most Azerbaijanis have witnessed the damage caused by Iran’s religious system of Velayat-e Faqih (the rule of the supreme jurisprudent) to both its economy and international standing. It is unlikely that they would want the same for their own country.

Then there is Iran's support for Armenia. During the first war over the disputed territory of Nagorno-Karabakh, Iran, while also supporting Azerbaijan’s position, provided food and economic assistance to Armenia. After the war, Iran then continued to trade with Armenia. This included areas which Armenia captured from Azerbaijan during the 1990-92 conflict. As far as Azerbaijan's leadership was concerned, Iran was maintaining the economic viability of lands occupied by Armenia. This greatly angered the Azerbaijani leadership — a sentiment that they repeatedly expressed in private meetings with foreign, including U.S., officials.

To counterbalance what the Azerbaijani leadership saw as Iranian support for Armenia, Azerbaijan improved its relations with Iran's enemy, Israel. By establishing relations with Israel, Azerbaijan was looking to fulfill other goals as well, including the purchase of sophisticated Israeli weapons for its armed forces. It also hoped to gain greater access in Washington through the American Israel Public Affairs Committee (AIPAC). This is very important to Azerbaijan's leadership, as it wishes to counterbalance Russia’s influence over Azerbaijan with its relations with the U.S. There was also an economic dimension as well, and since then Azerbaijan has become one of Israel’s top oil suppliers.

However, over the years, what has strengthened Azerbaijani motivation to improve relations with Israel is Iran’s continued intervention in its affairs. Examples include the 2006, fatwa from the Iran-based Ayatollah Fazel Lankarani. It permitted the killing of two Azeri writers who wrote material deemed to be insulting to the Prophet Muhammad. One of them, Rafiq Tagi, a passionate critic of political Islam, was killed in November 2011. In the same year, several Iranian clerics voiced their disapproval of Azerbaijan's decision to ban headscarves in schools. The following year, Azerbaijan stopped an attempt, linked to Iran, to kill two Israelis working at Baku’s Jewish school. Relations worsened in 2018 when Azerbaijan charged 18 men with plotting a coup d'etat at the behest of Iran. Iran denied any links to the defendants.

The Azerbaijani regime has also provoked Iran over the years as well. For example, it has allowed groups that call for the independence of the Azerbaijan provinces in Iran’s northwest to operate on its territory.

However, on balance, Azerbaijan is militarily and economically smaller than Iran. Its relations with Israel that anger Iran were partly established because of the threat it feels from the Iranian regime. Iran wants Azerbaijan to distance itself from Israel, but its recent military muscle-flexing is only likely to push Azerbaijan in the opposite direction, toward Israel.

Meir Javedanfar teaches Iranian diplomatic and security studies at Reichman University, Herzliya. He tweets as @Meirja. The views expressed in this piece are his own.