Iraq’s Shrinking Revenues, the I.M.F. and the Oil Dilemma 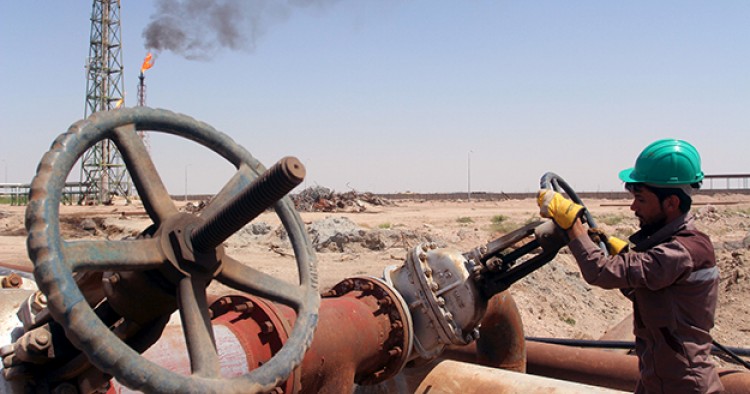 The International Monetary Fund announced in July that it has approved a three-year, $5.34 billion loan for Iraq under the Stand-By Arrangement facility, which it said was focused on “implementing economic and financial policies to help the country cope with lower oil prices and ensure debt sustainability.” The promised financial assistance was made conditional on—among other things—Baghdad settling all debts to international oil companies (IOCs) without adding new debts. To satisfy that condition, this would require Iraq to allocate a big chunk of its oil exports to paying IOCs at the expense of revenues to the treasury. In the current dysfunctional political system in Iraq and the low accountability among its political class, the first victim of this arrangement will be Iraq’s oil market share where it faces fierce competition from Iran and Saudi Arabia.

The suggested reform program is very ambitious. It aims, according to the I.M.F., to bring spending in line with lower global oil prices, strengthen public financial management, and curb corruption, none of which the successive governments in Iraq had managed to do, or at least attempted to do.

The three-year loan comes on the heels of about $1.24 billion that Iraq received in 2015 from the I.M.F. under the Rapid Financing Instrument. It is also expected to open the door for Iraq for further external financing, which, according to some estimates, could amount to another $10 billion.

There are several caveats to the deal. An important one is that Iraq should pay all arrears owed to IOCs by year end and continue to be debt-free vis-à-vis those companies until the program starts. Those arrears are paid by allocating a certain number of barrels from the oil dedicated for export each month to the various developers of oil fields.

Since the beginning of 2016, Iraq has allocated about 236 million barrels of crude or some 30 percent of its total exports to end August for payments to IOCs.[1] Based on the average price Iraqi oil fetches on the market, those barrels were worth some $7.7 billion. The biggest chunk of this went to the payment of arrears to IOCs from 2015. For 2016, the Iraqi oil ministry budgeted total spending for all oilfields being developed by IOCs at $9.5 billion. This will help maintain output at close to its current levels, but not expand it significantly. Just how the I.M.F. expects Iraq to clear all arrears before the beginning of the program, and increase the spending to speed up the development of the oilfields to generate more revenue, while staying debt free, is a mystery.

The terms of the 11 contracts Iraq signed with IOCs since 2009 to develop its southern oil fields requires the ministry to pay back quarterly, in kind, all the cost incurred by the companies, in addition to a fee per barrel produced.

When the oil price was high, allocating the barrels was no issue. At $100 per barrel for the Brent benchmark, just 500,000 barrels of Iraqi export crude were enough to repay IOCs $1.5 billion/month. The remaining crude produced was enough to generate the revenues to satisfy Iraq’s budgetary needs. To keep payments at that rate when the oil price hit $30/barrel (or bbl), Iraq had to allocate more than three times that volume. This is more than 50 percent of its total oil exports that represent close to 90 percent of its budgeted revenues. Iraq had less oil to export and at a lower price, generating less and less revenues. Early this year, when Brent crossed the $30 bar, Iraqi crude fetched $22 and $23/bbl in January and February.

In 2014 and 2015, Iraq’s exports averaged 3 million barrels per day.[2] This year, exports so far averaged 3.25 million b/d, from the southern terminals. Exports from the north were halted for most of the year due to disputes with the Kurdistan Regional Government over revenue sharing and allocations from the federal budget

Though oil prices have edged slightly higher in recent months, pushing Iraqi crude price to close to $40/bbl, maintaining or increasing allocations to IOCs is already claiming its first victim: Iraq’s traditional buyers or those who buy Iraqi crude on yearly term contracts.

In recent years, Somo, the Iraqi state’s oil marketing company, has been courting Asian companies offering additional commitments to buyers in an effort to expand its slice in the market share war it is fighting against Saudi Arabia and Iran. In 2016, it increased its yearly term contracts allocations by more than 11 percent over 2015, with the Asian market allocating 18 percent more crude than last year.[3]

Saudi Arabia has been the main beneficiary of sanctions imposed in past years, first on Iraqi then on Iranian oil exports. At a time when the call on OPEC oil is decreasing as a result of new unconventional resources being developed outside of the cartel, a fierce war erupted among the three competitors to defend and expand their respective share of the market, with Asia topping the courtship.

Most forecasters expect oil prices to remain around the $50 bar into 2017. Iraq is expected to add modest increments, if any, to its oil production and exports in 2017-2018. By forcing Iraq to squeeze its regular customers to expand expenditures in the oil sector, while keeping pay back to IOCs up to date, the I.M.F. conditions threaten to send Iraq back to the dark days when, doubting Iraq’s ability to fulfill its commitments, buyers, especially term contract holders, treated Iraqi crude as the oil of last resort.

The dilemma Iraq is faced with is that increasing Iraq’s oil production by investing more in the oil sector admittedly generates more revenues. But to be able to repay IOCs on time without further damage to the budget and losing its market share, constraints have to be imposed on how Iraq manages its finances.

The I.M.F.’s answer to the dilemma is through an economic reform package: better collection of taxes and customs, reducing expenditures and deficit, imposing income tax on wages and benefits of high officials, a restructuring of the budget to stop hiring, and so forth.

In a political system that, since 2003, has been founded on incompetence, corruption and an entrenched system of cronyism, this is mission impossible. This applies to the absolute majority of the executive, the legislative, and the judicial.

The federal budget is a case in point. The budget is drawn up by making simple allocations to government bodies; ministries, provincial councils, and state bodies, all of which are considered fiefdoms of the various political parties. The budget is debated and voted into law by a parliament where the norm is the impunity it awards to its MPs and their political leaders. Final state accounts, when presented several years after they are due, are closed by a vote but without professional scrutiny.

Seen within the prism of the realities on the ground, the I.M.F. measures and conditions look more like a patchwork policy of fixing the symptoms of the dysfunctional political system in Iraq, rather than transforming the system itself to enable it to carry out badly needed economic reforms.

[2] This includes oil exported occasionally by Baghdad via the northern Turkish terminal of Ceyhan but excludes oil produced and exported by the Kurdistan region of Iraq.

Libya's future is bigger than any one leader