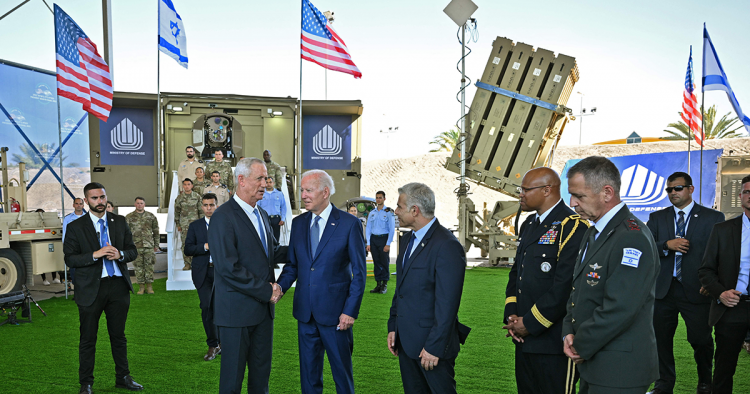 The decades-long confrontation between Israel and Iran is now arguably becoming more dangerous. Economic, political, and military pressures have failed to stop Iran from becoming an almost nuclear threshold country. The Islamic Republic does not recognize the Jewish state and the latter considers the former an existential threat. Now, amid a lack of consensus among Israeli leaders on how to address this perceived existential threat, calls for applying greater pressure are gaining momentum. The two countries have been engaged in a shadow war for years that includes assassinations, sabotage, kidnappings, and cyber operations, but a new phase of tensions may only bring them closer to a full-scale conflict.

For decades Israel has shown a strong determination to use diplomatic, military, and clandestine means to prevent any of its neighbors from acquiring a nuclear weapons capability. In line with this policy, known as the “Begin Doctrine,” Israel bombed Iraq’s nuclear facilities in 1981 and those of Syria in 2007. Former prime ministers Ehud Barak and Benjamin Netanyahu wanted to launch similar preemptive strikes against Iran’s nuclear facilities in 2010-12, but they faced strong opposition from the Mossad and the Israel Defense Forces. The proposition was risky as Israeli jets would need to travel much farther than was the case with Iraq or Syria and would face a much lower chance of success. Tehran has also learned from Israel’s previous strikes: Its nuclear facilities are spread out and it has developed capabilities to retaliate against a potential Israeli attack. As a result, it is not clear if such a strike would accomplish its non-proliferation objectives. What is certain, however, is that it would be both costly and complicated.

Notably, there is no consensus among senior members of the Israeli political and security establishment on how to address concerns about Iran. Israeli leaders intensely lobbied the U.S. administration and Congress in 2015 against the Joint Comprehensive Plan of Action (JCPOA). After President Donald Trump pulled out of the nuclear deal in 2018, former Mossad chiefs Tamir Pardo, Shabtai Shavit, Danny Yatom, and Efraim Halevy all criticized the move, with Pardo calling it a “strategic mistake.” Defense Minister Benny Gantz and other senior officials have taken a different position on President Joe Biden’s efforts to revive the JCPOA, arguing that Israel does not oppose a nuclear deal in and of itself, but rather opposes a bad agreement. They have called for a longer and stronger deal with more sticks and fewer carrots while insisting that Israel will not be forced to live with a deal that it views as insufficiently tough.

Recognizing that Tehran has made considerable progress in producing weapons-grade uranium, Israel has expanded its campaign against Iran in recent years with the aim of preventing it from developing a nuclear warhead and delivery system. Israel has intensified its attacks on Iran’s missile and drones bases as well as senior commanders, engineers, and scientists working on these programs. These attacks are a major part of what former Prime Minister Naftali Bennett called “the Octopus Doctrine,” which involves stepping up covert operations on Iranian territory, rather than targeting regional proxies in third countries.

The assassinations, attacks, and cyber operations have all complicated and slowed down the advances of Iran’s nuclear program. However, they have not weakened Iranian leaders’ determination, and ultimately they have failed to stop Tehran’s nuclear and missile programs. Despite all of Israel’s efforts, Iran is now on the verge of becoming a nuclear threshold country.

Israeli strategy is now evolving in light of this new reality. The likelihood of the JCPOA’s collapse or long-term freeze is increasing and Iran’s nuclear program may grow further, while the potential complications from an Israeli military strike on Iran are unlikely to be resolved any time soon. Thus, Israel has felt a need to revise and upgrade its strategy for containing Iran. In the past several years there has been a growing perception in Israel that the Iranian nuclear program cannot be viewed in isolation from Tehran’s broader military strategy. As a result, Israel’s strategy is now focused on mobilizing regional resources to simultaneously contain Iran’s military and nuclear programs.

While in the short term a fully-fledged Arab-Israeli partnership against Iran remains unlikely, Israel is working hard to build a stronger regional consensus and commitment to the common objective of checking Tehran’s military capabilities. Air and missile defense, maritime security, and special operation forces are all areas where integration of Arab, Israeli, and U.S. military assets in the region would provide new capabilities for deterring Iran. Especially for Israel, these defense integration projects, even if the results are only modest, will help to contain an Iranian retaliatory response in the event of future Israeli preemptive strikes on nuclear facilities. In other words, Israeli officials may view these regional defense collaborations as one of the phases of their preparation to strike Iran. In addition, bringing Israel’s military presence closer to Iran would significantly enhance its intelligence gathering and strike capabilities inside the country. In essence, Israel has opportunistically benefited from the Arab-Iranian rivalry to pursue military-technical cooperation with regional partners.

Several interrelated developments have helped to reshape the regional strategic landscape to facilitate this strategy. First, after long negotiations, the United Arab Emirates and Bahrain signed normalization agreements with Israel, known as the Abraham Accords, in August 2020. Second, the uncertainty some Gulf leaders have regarding the U.S. commitment to defend them has created the political space for greater security cooperation with Israel. Third, renewed U.S. attention to the region and Biden’s recent trip to Israel and Saudi Arabia conveyed the U.S. commitment to a stronger Arab-Israeli military partnership. U.S. Central Command (CENTCOM) plays a pivotal role in ensuring the technical and procedural tasks involved in any military integration plan are carried out — another way in which the U.S. highlights its commitments to its partners. The U.S. military’s decision to move Israel from the U.S. European Command’s area of responsibility to that of CENTCOM in early 2021 should be seen as a major facilitator in this regard. At the same time, closer military integration will help to keep Arab states in the Western orbit and manage their hedge toward Russia and China.

While the development of a fully integrated air and missile defense architecture has a long way to go, cooperation between Arab states and Israel on that front has already started. In June 2022 Defense Minister Gantz told Israeli lawmakers that Jerusalem is part of a regional military partnership with Arab states called the Middle East Air Defense Alliance. The members of this new initiative are working together with the United States against Iranian missiles, rockets, and drones. Gantz claimed that the alliance is in place and has already responded to alleged Iranian attacks. An Israeli official said partner countries were synchronizing their respective air defense systems through remote electronic communication, rather than by sharing facilities. Unconfirmed reports also suggest that Israel has deployed radar systems in the UAE and Bahrain.

But Iran is also developing its own response, driven by the logic of “balancing the threat.” As studies about 2011-12 and the 2019 tensions in the Strait of Hormuz make clear, when Tehran perceives a growing existential threat, it distances itself from conservative policy responses and instead adopts a brinkmanship strategy to convince the other side of the mutual costs and extract more concessions. The balance of power dominates Iranian strategic thinking. From Tehran’s point of view, Arab-Israeli military cooperation can potentially alter the regional status quo and the existing offensive-defensive balance. With this in mind, at least two overlapping policies might shape Iran’s response strategy.

First, Tehran may view its nuclear program as a way to balance. An expansion of Arab-Israeli military ties may convince the leadership in Tehran that keeping its nuclear program at the current level might have future security benefits. If Tehran assesses that with or without the deal, regional military cooperation to counter Iran’s capabilities is going to increase, then it is likely to conclude that the revival of the JCPOA represents a greater security risk. In this case, Tehran may decide to maintain the option of nuclear escalation as a response. Previous Iranian reactions followed this logic, with Tehran responding to Israeli attacks by boosting its enrichment volume and capacity.

Second, Tehran may choose to project power and enhance its deterrence posture by strengthening regional proxies and stepping up its security assistance to them. Ironically, as technical military ties between Arab states and Israel grow closer, this will only enhance the critical role of Shi’a networks in Yemen, Iraq, and Syria in confronting the new front. While ongoing Iran-Gulf Cooperation Council (GCC) talks can reduce political tensions to some extent, given the lack of tangible security-military talks between Iran and Arab states, it is not hard to imagine that Tehran will decide to respond in technical ways too. That includes, for example, providing more capable unmanned aerial vehicle systems to its proxies, expanding the range of groups that receive sophisticated assets, and looking for new proxies. Put another way, Tehran may also gradually start to increase its offensive platforms across the region so as not to lag behind its rivals’ growing defensive capabilities.

The potential consequences of these balancing and counterbalancing dynamics for the future of the Middle East are grim. These dynamics further complicate the prospects for reaching a political solution to key regional issues — a result that could negatively impact the future of Iran-GCC normalization efforts. Normalization of relations between Israel and its Arab neighbors can contribute to regional security, political stability, and economic prosperity if it helps to promote diplomatic efforts to end the Arab-Israeli conflict and pave the way for a two-state solution. But if normalization is seen as an attempt to create an Arab-Israeli joint capability to contain Iran militarily, then the process could end up further destabilizing the entire Middle East.

A better approach would be to seek ways to de-escalate the growing tensions between Israel and Iran, support Iran’s talks with Saudi Arabia and the UAE, and encourage a regional strategic dialogue, particularly the Saudi-Iranian defense talks. The recent warming of relations between Ankara on the one side and Jerusalem, Riyadh, and Abu Dhabi on the other is a welcome development. Moving forward, the Biden administration should seek to build on this and urge major Middle Eastern powers to construct an inclusive regional security architecture where the legitimate security concerns of all players are recognized and addressed.

Gawdat Bahgat is a professor at the U.S. National Defense University.

Abdolrasool Divsallar is a non-resident scholar at the Middle East Institute and a visiting professor at Cattolica University in Milan.